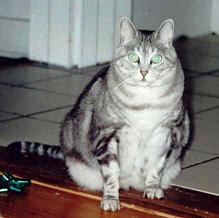 This is Sabian.
She is our oldest cat, the one we got from the pound in Austin. Sabian has always been my cat, which isn't to say that the hub doesn't feed and water her, nor is it to say that his lap won't do in a pinch, but she has always been more mine somehow. She's not the sweetest cat, nor is she its slenderest. But she's a good cat and very cat-like in all of those important ways, like aloofness and imperiousness. And she has the softest fur ever.

She's also a very sick kitty. And as much as I hate to turn into one of those women who carry on about their pets as if they were kids, I'm a bit verklempt about the whole thing. Not like taken-to-my-bed verklempt, but certainly very concerned. She's not young--and we may have to make that decision that every pet owner dreads. You never know, tho. The tide could turn. Or not. We shall see.

(For those scoring at home, there are two other cats: Trout (the UT-Austin-ites will get this joke, which is funny only to those who were there.) and Mooch. I'm sure I'll mention them again. Especially Mooch. He's just not right.)

a bit about Oneonta

I am a three block walk from downtown, which has about as much retail on it as all of Knoxville's downtown, crammed into three or four big blocks. There is the Tomato Head analog--the Autumn Cafe--where Scott, the Diva and I had dinner the other night. It isn't quite as inviting as the 'Head, but it is very, very, very good. The tofu is marinated in some kind of tarragon-based dressing that is yummy and different. And they have an extensive wine/beer/hard cider menu that is perfect for a blustery fall day.

Also of interest downtown, where there seem to only be two or three empty storefronts:
A couple of head shops, who also sell the requisite incense and candles and oils and whatnot.
Two fancy restaurants--one Italian, one wine and tapas.
A solid used bookstore.
A former Woolworth's that now some off-brand 5 and 10.
An office supply store and a sporting goods store, where they also string tennis racquets.
A great coffee shop, The Magic Bean.
Private Drawers, which stocks antique chests of drawers and lingerie (not antique).
A department store, Bresee's, that has seen better days.
And a couple of clubs and bars and tattoo piercing parlors and a Greek/Thai diner, whose menu has to been seen to be appreciated.

All of the merchants seem to be doing fairly well. I'm down there fairly often, taking the baby for walks and enjoying the fall weather. (Apropos of that--the weatherguy warned us that today was going to be the last really nice day until, like, Spring. The rest of the week promises to get downright nippy, with highs in the 50s and lows in the 30s. Woo.) It's surprising, given how loudly the downtown death knell has been rung on a national level. It's doing quite well here, it seems.

What helps is what I did this morning. Every Saturday and Tuesday afternoon there's a farmer's market, where local organic farmers and craftspersons can hawk their wares. I just picked up fresh corn, beets, a type of apple that I'd never before heard of (and whose name I promptly forgot--sorry), almost bought some pie pumpkins and a garlic braid, did buy some handcream made from organic herbs and local beeswax--all of this for under $10. Stone and Thistle Farms had a booth where they were selling organic eggs and taking orders for free-range turkeys. I'll probably invest in their meats, since Fast Food Nation scared the poo out of me on the whole meat front but it was damn near impossible to find a place in Knoxville that could deliver both quality and variety. All is all, a good morning. The Market will go away once the snow starts flying, of course, and it'll be missed.

Of course, there are a whole lot of things Knoxville had that Oneonta doesn't--but that's another post for another day.

And, note to Adam, I did get your questions (thanks!) I just have been mulling them over. I am a muller. Look at me mull.

Meredith's question:
What Five things that are such an integral part of your life, you can't believe someone else introduced them to you.

And, so, my first dip into the Friday Five pool is more like a plunge. I'm not sure that any of these things are an "integral" part of my life, but they are certainly a large part of it"

1) Martha Stewart Living, the magazine, introduced to me by Karen, my fellow Central Market gift basketeer. I know--to look at, I seem like one of the last people to jump on Ms Stewart's tastefully decorated bandwagon, given that I've already settled into my fall uniform of jeans, a flannel shirt, and some kind of comfortable shoe. But my first glances through the magazine, which Karen had left lying about our hotel room during a flea market binge in Memphis, were like being smacked on the forehead by her signature line of high-thread count cotton pillowcases. Suddenly, I understood why people cared so much about how their homes looked, how that translated into how their homes felt and operated, and why that was important. Now, a couple of years out, I get some deep satisfaction from finding just the right shade of pumpkin for the new dining room's walls. I love the show, too, but there's just something about falling into the magazine each month that is more powerful that watching it on tv.

2) A Marge Piercy poem left on my desk by one Rick Baldwin, no relation to the famous Baldwin brothers. Rick read a piece I'd written while at the Pulse, where he was, at the time, a designer, and thought of this poem, which he'd first picked up after it made an appearance on The Writer's Almanac. I've now moved that photocopied piece of paper that was left on my work computer one night with me to New York, even though I have the poem memorized. It's the last line that gets me every damn time.

3) Baby Gap, introduced to me by Steph, who took me shopping for baby togs one day when the niblet was at her most wee. See comment above about my lack of sartorial splendor. But I truly, madly and deeply enjoy buying baby clothes, especially pricey baby clothes. I can't explain this.

4) Not such much a thing but still in the same spirit--tennis, which I picked up because of a certain webmonkey. It's something I'd toyed with since high school but the sheer number of folks who played in the Pulse office made me want to get serious about it. It was the monkey who handed me a pamphlet from the local tennis center that listed all of their cheap classes. Now, I'm hooked.

5) Several dozen phrases (again, not things, but in the same spirit) that I've stolen from other people. "It's a strong choice," from Robi Polgar who lifted it from a UT directing prof. "Howling fantods," from David Foster Wallace. "Oh no" (you really have to hear the inflection on this to get the full effect), from Pheobe Buffet by way of Knoxville Robby. I could go on...and that's slowly making me wonder if there's anything truly original that I say.

Save the snollygoster! Some things are just too precious to be lost. And, heck, it's just a great word. Say it out-loud a few times and see if you don't agree.

The Niblet has become The Diva, for those scoring at home.

A weblog, finally. It seems like yet another way to avoid actual work, what with all of the tinkering and noodging and choosing, but here it is anyway.

Not lovin' the design yet, so changes are afoot. Pay no attention to the monkeys in overalls.