"For some reason, the most vocal Christians among us never mention the Beatitudes. But often with tears in their eyes, they demand that the Ten Commandments be posted in public buildings. And of course, that's Moses, not Jesus. I haven't heard one of them demand that the Sermon on the Mount, the Beatitudes, be posted anywhere.
'Blessed are the merciful' in a courtroom?
'Blessed are the peacemakers' in the Pentagon?
Give me a break!"

-- From A Man Without a Country by Kurt Vonnegut.

NB1: Country isn't his best work by a longshot, but he's earned the right to use that many exclamation points.

NB2: Spring is here. I know this not because of the balmy temps, but because the lawns of student apartments in the neighborhood have sprung their Beer Pong tables, like they were drunken, libidinous daffodils. Ah, these kids with their bodies. Always exploring.

I have spent most of the morning wondering what I am forgetting. It feels like there was *something* I was supposed to do, but I can't figure out what it might have been. I do know where my kids are, so I'm not overly worried that I have abandoned them someplace. So there's that.

I suspect this has to do with Hartwick being on Spring Break right now. I would normally be teaching now, so maybe my unease is simply a vestigal urge to be in a classroom. I doubt it, tho. That would be so unlike me.

While I try to sort it out, three things:

One -- to the person who found the blog by searching for "Vera Brittain Testament of Youth Cliff Notes" I'd like to simply say "read the damn book already."

Two -- I spent most of my last month of high school making an incredibly long gum wrapper chain. I'd actually work on it during most of my classes, largely because I no longer gave a crap about high school and knew I was going to graduate regardless of performance. I am still amazed that I did as well as I did that last term and that all of my teachers let me work on said gum wrapper chain. Anyway, I was thrilled to stumble upon this how-to guide from the world gum wrapper chain record holder. Good thing I don't chew gum anymore.

Third -- In the circles in which I run, the beer of choice is frequently one from Magic Hat. One of the great things about this brand -- other than the beer itself and their Monty Python meets Myst website -- are the bottlecaps, which a friend has been collecting. I've been scanning about to find ways to display them and think that some of these ideas might have promise. Can anyone think of anything else?

The next Sew? I Knit project has been announced and it is "a bag." 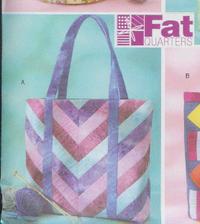 Except mine will be done in colors that aren't so ... pastel. My current plan is to use some Amy Butler Fat Quarters because I love them. You may not. But it is my bag. So there.

I chose the bag I did because I have been inspired to try quilting by Ms Shelley, whose baby quilt for Maddy is now in Cory's room. I stare at it every night as I convince him to sleep. I still love it.

This bag seems like a low-committment way to give it a try.

One day, when I know what things like "Heavy Duty Template Plastic" and "wide extra-heavy stabilizer" are, I want to make this. Right now, tho, the very idea scares me. I'll have to live vicariously through SAL Cyndi.

Oh -- and another quick note that is completely unrelated to bags. Other kids of the '80s will be thrilled to learn that the greatest piece of film about rollerskates will be coming to an off-Broadway theatre soon. I lack proper words to describe my feelings.

more in a moment I suspect

If you haven't been reading Making Light, you should start.

What prompts this is Teresa Neilsen Hayden's take on Jane Smiley's story about the Bush administration's ability to listen. For a small taste, this quote:

Bush is to public discourse as Three Card Monte is to card game.

Can someone remind me again why there aren't riots in the streets?

Anyway, go read it. I can wait.

the science of babies

Just found out that one of my former students died over the weekend. Details are non-existent, currently, but theories are many. It's just sad when someone who is so very young is dead and when she had graduated recently enough that a lot of her friends are still here and grieving. More later, if I can think of anything more substantial to say other than, "Wow. That sucks."

From death to birth...

For some reason, today seems to be the day for links to baby-related news. Skip at your discretion.

First, Sydney Spiesel weighs in on the benefits of breastfeeding. They aren't what you think. And his approach to the topic is refreshingly dogma-free.

Second, the NYT takes on induced labor. From my perspective, if it weren't for induction, the Diva would still be in there. But, YMMV.

Third, one of the links at the bottom of that NYT story is for a piece on the competition between mother and fetus based on evolutionary factors. It's interesting work.

Not only can you play with your Elefun in the traditional way, where you try to catch the butterflies with the nets, you can also just have a blast putting the nets on things that need to be netted.

Ah, the things that keep us amused.

In other news, the dead Kitchen Aid mixer will not be used as a unique garden ornament this summer. The folks who make them do run a program where you pay a small fee, which is all-inclusive in terms of shipping and labor, and they will take a look at it. Turns out, fixing said mixer will be $40, which is completely reasonable.

Oh -- and their diagnoses was that I blew a gasket.

I should have it back by next week. Cookies for everyone!

you give me fever

The Diva is sick. It's weird, though. She really just has a high fever and the slightest of runny noses. Yesterday morning, there was a brief "disgusting" episode, then nada. I mean, she's certainly not herself -- but the fever seems to be the worst of it. Odd.

Anyway -- blogging will be light.

But, first, from the Duh Department: A new study was just released that strongly indicates that treating a mom's depression gives her kids a much, much smaller chance of being depressed as well, and that a mom's depression has a huge impact on the well-being of the rest of the family. Well slap my arse and call me fanny. Who would have thunk it?

Next week: a groundbreaking study on how throwing things up in the air almost always ends with them falling back down.

my husband will mock

A former college housemate once described her mind as a rocky tunnel with lots of low-hanging branches. IIRC, she then when on to describe herself as navigating through said tunnel at high speed while wearing a blindfold. I may be remembering this wrong, however. It was a long time ago and I have a sneaking suspicion I had been drinking heavily and/or sleep deprived.

Regardless, it is a great description.

(Incidentally, this is the same housemate who, while we were playing a round of Euchre (the sport of kings), announced for no apparent reason that her grandmother is Irish. Rest assured that no one understood then, either.)

My mind is similar, but for "low-hanging branches" substitute "odd amusements and wacky-ass trivia." And I'm not blindfolded, which I know because all of the trivia and amusements continually distract me from the tunnel itself. Oh -- and my tunnel also happens to have these tiger traps, but rather than spikes that impale the trapee, there are TVs tuned to inexplicable-yet-flypaper-sticky programs that I just can't seem to resist.

For example, if sumo wrestling is on, I will watch it. And, nope, I have no idea why. The same is true for curling. Again, no idea.

The same also used to be true for the Miss America Pageant, but I seem to have outgrown this. Or it could be that my cousin, the former Miss Teen of Florida, is no longer on the circuit. Or it could be that I just can't bear to watch a woman whose butt cheeks are glued to her swimsuit.

But I still can't move past my weird penchant for cheerleading. I'll watch is on ESPN, if given a chance. I'll argue to my last breath that it is just as physically demanding as gymnastics or ballet. I'll openly admit that I also find it odd that one of the few acceptable sports for girls -- especially Southern girls -- is based around the concept of being on the sidelines while you offer spirit support for boys who are playing a real sport. I'll even write about teams that cheer for no one. But the one thing I can't explain is why I care in the first place.

I have to disagree with Virginia Heffernan's take on Lifetime's new reality series Cheerleader Nation, which I have been watching because I just can't help myself. It does tell you quite a bit about both cheerleading and about moms and teenage girls. I remember being a teenager and will one day have a teenage girl and the show is both horrifying and reassuring in terms of how mom and girls interact. What gets me more is are the McMansions and upper-middle Appalachian lifestyle. The nail shops and motorcycles and bad dye jobs tell more about the region than a thousand dissertations. But Heffernan either missed that aspect or didn't care. It is a show about much more than pointing a mocking finger at cheerleaders and their moms. That, however, doesn't make for good copy.

Regardless, I'll still watch it until we know whether Dunbar can make the threepeat. And, deep down, I still can't quite put my finger on why I should care.

the skirt? she is done.

Given that my hair and make-up support team were nowhere to be found, you just get a picture of the skirt. Rest assured that I do have a head, torso and feet. And while you can't tell from this shot, I even shaved my legs for this. 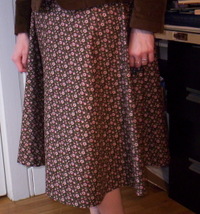 Some thoughts on sewing: It's not as challenging as I had believed. And you get a finished product more quickly than knitting -- even with my ability to misread even the simplest of directions. I fairly certain I sewed each seam in this skirt twice. I refuse to show you what the zipper area looks like. Let's just say that I always plan to wear a long shirt with this.

Because I was feeling so flush with success, I even made two pairs of pants for the Diva, who seems to be built like her dad, which means that I can find pants that are either long enough or fit her waist -- but not both. 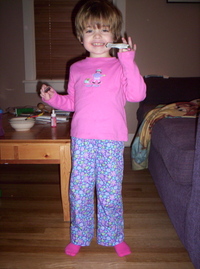 The other pair is the same pattern, but in a solid pink.

I'm more pleased with these than I am with my skirt. We'll see how they hold up, however. I did leave enough extra fabric in the hem to give them another inch or two when the need arises. In theory, I can also let out the waist, but I doubt I'll need to before she is 7 or 8.

I can't wait to see what the next project is -- but I plan to let the sewing machine sit unused for a couple of weeks. While I have enjoyed the sewing, it requires soooooo much concentration that I'm ready to simply knit for a bit.