Quote of the day

"Take out your syllabus. Read the part on page 2 about papers. What part of 'I will not accept papers via email' is unclear?"

-- Me, to a student earlier this week. Apparently, that part of the syllabus was hard to grasp. Oh, and I am an inconsiderate hard-ass who does not know how challenging it is some mornings to get out of bed and come to class long enough to turn your paper in.

The vast majority of my students are lovely, by the way. There are always a few, however, who like to see if you were really serious about requirements. For the record, I am.

why I went into journalism

Four or five times a week I cross paths with the same guy. This has been going on for almost three years now.

I haven't the slightest idea who he is, only that he must live nearby. The first few times I noticed him only because he bears a remarkable resemblance to a TV producer (who, incidentally, doesn't like me one bit) from Knoxville. That's probably the reason that his face stuck with me. I wondered if said TV producer had gone completely off his nut and followed me to New York.

On closer examination, they are two different people, this guy and the TV producer. But they could be brothers.

He walks like someone who has just ingested a fistful of hallucinogens and must step with great concentration lest he wander off into some technicolor nightmare. His focus is intense, like he is studiously ignoring a talking dog because he knows it is crazy to see a talking dog yet it is still there in the corner of his eye.

His age is hard to guess, given that he has the unlined face of the moderately insane. When you undeniably lose your shit you seem to stop aging. My only theory on that is that your level of daily life stress plummets when you give in to madness -- plus most of the pharmaceuticals the truly bananas take have a knack for cutting way back on the angst that ages you.

I don't think he's dangerous. He just seems to spend most of his day walking around the center city, usually carrying a shopping bag or two. He must have a place to live because he is reasonably kempt. But I've yet to see him enter or leave a residence around here. Still, he must. Oneonta is not the sort of place where one can live outside for long. Not in February, at least.

I saw him the other day when I was driving back from the grocery store. He was chatting with a guy I'd not seen before. They were laughing, which was a shock, given how affectless this guy usually is. It made me wonder if he'd hit a nice downhill section in his mental health marathon. The jury remains out on his long term prognosis.

But I did almost stop yesterday simply to talk to him. Why is he here? What does the world look like to him? Why does he walk? Is that how he keeps the demons at bay? What's with the Dolphins? I'd like to say that I want to help him. While I certainly wouldn't mind helping if there were something I thought I could do, really my interest is more base. I find him intriguing. I want to know his story.

This used to happen to me a lot when I was still working for a paper. A byline gives you a free pass to pry. It also makes you bold enough to ask questions that non-press people would have to courtesy to avoid. Now, I'm just nosy and have no way to legitimize it.

Regardless, I still want to know, you know?

i just don't get it

Yet another reason why my country makes me so sad sometimes -- the remarkable pediatrician Dr. Parker explains the HPV vaccine. And if it is made available to my kids, you can bet your arse that I'm going to use it.

Which reminds me of a joke:

There is a huge flood, like New Orleans-sized huge. Unlike the Katrina debacle, residents are being rescued. A man is on his roof. An EMS guy in a row boat floats past.

The EMS guy shrugs and rows away.

A little bit later, four cops in a power boat zoom up to the man on the roof.

The cops in the power boat shrug and motor away.

A little bit later, a helicopter and its crew hovers above the man. They lower a rope ladder.

God meets him at the gates, as God frequently does in these sorts of tales.

"God," says the man. "Why did you not provide and let me drown?"

And God says, "What the fuck do you think the row boat, motor boat and helicopter were?"

Nothing going on. I should be writing. This is not unusual.

Melissa hits the nail on the head about kids figuring it all out when they are ready to. Given the Diva's potty problems, I keep trying to reassure myself that this is true and that pressure won't change how quickly she learns. And one of these days, I should really draft a proposal for my epic treatise on competitive parenting.

Finally, I might need to get one of these shiny shirts from Black Market Beagles. Have I mentioned that there's less than a month until my birthday...

The children, bless them, spent last night conspiring against Scott and I. The boy is teething. The girl, jealous that the boy is getting all of this attention because he keeps waking up because his mouth hurts, decided to spend the night having bad dreams. Both were up for good at 6 a.m. As was I. Oh. so. sleepy.

To add to the irritation, Scott is also in tech, which means that he is keeping truly odd hours and I'm wrangling the two beasties into bed solo. This is more of a pain in the ass than it probably should be.

I do, however, have a new favorite show to keep my mind off the sturm und drang: Slings and Arrows, which follows a Canadian Shakespeare festival as written by Mark McKinney, former Kid in the Hall, and others. It is hysterically honest. I suspect that you'd still get it even if you've never done a lick of theatre. If you have, however, treaded (trod?) the boards in some form, you'll weep in both a joyous and sardonic sort of way.

My only qualm with Slings and Arrows is that I'm coming late to the party and have missed the first season. And it doesn't seem to exist on DVD yet.

In other news, I finally found a use for my pica stick, which is an old school type measuring device I was forced to buy in J-school. It is perfect for measuring and marking a hem.

"People aren't supposed to look back. I'm certainly not going to do it anymore.

I've finished the war book now. The next one I write is going to be fun.

This one is a failure, and had to be, since it was written by a pillar of salt. It begins like this:

Listen:
Billy Pilgrim has come unstuck in time.
It ends like this:
Poo-tee-weet?"

--From Slaughterhouse Five, which I'm re-reading in order to teach it and have discovered that it is about a billion times better (on all levels) than I thought it was, and I thought it was pretty great to begin with.

First, a little linky that I may have posted before. The idea of the Dread Pirate Parton just fills my simple little soul with hysterical glee.

Yesterday, I was flipping though some magazine with the Diva's "help." She stopped on a page advertising the new Narnia movie, as well as some other new Disney DVDs. "Look, Mom," she said with overflowing joy, "they have 'The Lady and the Cramp!'"

shameless self promotion, part 225 in a series

New Bookslut column up, this one is about the Tiptree. In a weird twist, the 2005 award was announced on the same day this was published, which means that I wasn't able to sneak this year's winner (Geoff Ryman's Air, which I feel that I've read even though I haven't) into the column. Ah, well.

(Edited to add: Scott Miller's new album Citation comes out March 14. Buy one or two or three. Also, on his website, a video all about his Amtrack Crescent trip. NSFW because Miller has a potty mouth. Fucker. (Also, the more eagle-eyed will spot one Mr Jack Neely in a spot or two. Jack, however, does not have a potty mouth. (Not in the video, at least)))

Other than that, nothing to see here. Move along.

the tuffet has landed

For the new machine's first trip out of the box, a quick project involving very little measuring, thought or accuracy before I dive into the skirt. I saw this nifty pin pouf on whip-up and couldn't resist trying to make one. Could you? 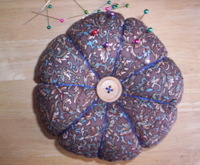 As a flying saucer.

Mere words cannot express how pleased I am. No, it isn't as technically lovely as the original -- it appears that sewing a real circle is beyond my current skill -- but it is awfully cute. Even the Hub admitted that it was cute.

Oh -- if I know you and if I know that you sew at all (or even kinda sorta thinking about sewing) you are so getting one of these for your birthday. You have been warned.