Yesterday, the Featureless Saint and I celebrated our 12th wedding anniversary. Hard to believe. Twelve years -- and yet we are still so very young and well moisturized.

(Actually, we've been a couple longer if you consider the 3+ years we co-habitated. But, technically, this is our 12th year of legal living together.)

So far, there have only been two anniversaries we haven't celebrated. The first was the summer the Diva was born, mostly because I had just gotten off of Tower Four and three hours without crying was its own celebration. The second was last year. The Dude had just been born and the best gift we could give each other was looooong nap. Which is what we gave each other.

This year, we went to Jay's Place. We've been there before and it has always been pretty good but last night is was amazing. And I don't think it was just the occasion.

What helped, of course, was that Jay himself was behind the grill and working the Fry-o-later. My filet Oscar, which was topped with asparagus, crab and hollandaise, was perfectly cooked. The asparagus was bright green. The crab was sweet. The hollandaise seemed home-made, rather than a dry Cisco mix. I have also discovered my death row meal. It wasn't the filet itself but the perfectly cooked steak fries soaked in hollandaise and meat juice. Come to think of it, this may be what kills me.

Scott's batter-dipped fried halibut was perfect and about as big as my forearm. Both the waitress and I were certain that he couldn't finish it. Then he did. The baked potato was left untouched. But, come on, it's a baked potato.

It's even more amazing that he finished it given the starter, which was a crab au gratin -- crabmeat in a cheesy sauce over puff pastry, was snarfed by both of us in seconds. I did get dessert -- a chocolate mousse that tasted exactly like uncooked brownie batter, which is my favorite treat ever.

And so 12 years on, here we are, well-fed and content. Can one ask for more?

The other day, the Diva and her class went on a field trip. Picture a rope line of four-year olds walking downtown to go to the library and to China 19 for lunch. When we picked her up that afternoon, I did the thing I always do, which is ask about the day.

"So how was the library?"

"And what did you have at the Chinese restaurant."

"Well," she said, as if explaining to a very slow toddler, "Chinese food."

Of course. How silly of me.

Next time I make it to the city, I am *so* getting tickets for Evil Dead The Musical. The only question becomes -- To "Splash Zone" or not to "Splash Zone?"

"Mr Suttree it is our understanding that at curfew rightly decreed by law and in that hour wherein night draws to its proper close and the new day commences and contrary to conduct befitting a person of your station you betook yourself to various low places within the shire of McAnally and there did squander several ensuing years in the company of thieves, derelicts, miscreants, pariahs, poltroons, spalpeens, curmudgeons, clotpolls, murderers, gamblers, bawds, whores, trulls, brigands, topers, tosspots, sots and archsots, lobcocks, smellsmocks, runagates, rakes and other assorted and felonious debauchees."

Finally finished Suttree. (Actually, I finished it last weekend but just now got around to writing this...)

First, I didn't realize how funny it would be. And how dark. And how very good.

Second, this is the book that the Knoxville city fathers really don't want people to read because while a lot has changed in 50 years, a lot also hasn't changed at all.

Third, Cormac McCarthy loves his words and uses them with a skill that borders on frightening, so much so that I'm going to force myself to make progress in Blood Meridian this winter, which is the other season when I tackle a big book that I feel I should read.

Fourth, how can you not love the word "lobcock?"

The San Francisco Chronicle's Sheerly Avni would like you to know that I am no Augusten Burroughs. Nor am I Jeanette Walls or Andrew Solomon. Nor am I funny or inspiring.

For a variety of reasons, I don't really take issue with it, save for one thing: Avni has been in this game long enough to know that the one thing that should be triple-checked is the spelling of names. My Madeline only has two "e"s, not three.

the Diva's small intestine and other news

Yesterday's jaunt to the Pediatric Gastroenterologist confirmed what we all already suspected, which is that the Diva will have to have a biopsy of her small intestine in order to provide proof that she does, indeed, have Celiac Disease. The biopsy will be done on an outpatient basis and is scheduled for Wednesday, Aug. 2 at an unholy hour of the morning.

I have decided to fling all of my nervous energy -- oh, and there is so much -- into crafts, work and research. There is a enormous well of information out there about Celiac that it is hard to (no pun intended) to separate the wheat from the chaff. Anyone out there care to make any recommendations? The PGENT's first ten questions included "Do you live near a Wegman's?" To which I bitterly answered "No." I looooooove Wegman's to the point of unhealthy obsession and my only requirement for our last big move was that we live in a town with one. That didn't happen because life is random and unfair. Oneonta, however, has a lot more perks than one could possibly imagine and was the best choice overall but, still, a Wegman's would be nice. As would a great new bookstore (the books are new, not necessarily the store) and a Target.

Um...I digress. The stress of this is bringing on my babbling reflex.

My point is that I need non-sucky books about Celiac and cooking for same.

In other related news, Celiac tends to run in families with European roots, especially those of Italian and Irish origin. It also almost never shows up in isolation, which means Scott and I will be tested as well. The Boy will be, too, once he reaches two.

Speaking of The Boy, he seems to have become the Job of the household. In addition to his double ear infection and Coaxsackie virus, yesterday he was stung by a bee. He really couldn't care less about any of this, mind you. He's pretty mellow. Still, we're all waiting for the rain of frogs.

On the book front, the Austin thingy at Book People is now on their calendar. And, as happens frequently, my name is spelled wrong. I strongly suspect that people think that it is actually "Andrea" and start to type that but get halfway through before realizing that it isn't "Andrea" but don't go back to the beginning to figure out where it all went wrong.

In college, one of the housemates was (and still is) named "Andrea" and the confusion that surrounded phone calls was the stuff of legend.

Still, any publicity is good, yes?

The Boy, in celebration of his brithday, picked up both the Coxsakie virus and an ear infection. Woot. He has taken a turn for the better, tho, and is approaching his normal level of gooberness.

Still, the general lack of sleep has made us all a little unfocused. More than usual, yes.

So, some random links:

-- Once again, my main blogger-pediatrician man takes a common sense look at breastfeeding. Now I need to get him to do the same for Celiac Disease. (Big appointment tomorrow. More later.)

-- The Guardian's digested read takes on Bill Buford's Heat, which I am currently reading. A quote:

""My lardo is bigger than yours," he scoffed. At that moment I decided I was going to be Mario's kitchen slave; just as he had once been Marco Pierre White's bitch. I was going to give up my life as one of the most prestigious editors at the New Yorker. This was not to be some cheap voyeuristic trek to knock out a book that my media pals would lovingly review; it was my own private odyssey to the heart of darkness of the Italian pig."

Heh. The swagger helps make it such a fun read still ... heh.

-- My latest Parenting Imperfect column, about my Girlie Girl.

One year ago today, our little Gnomer looked like this:

Hard to believe that now he looks like this: 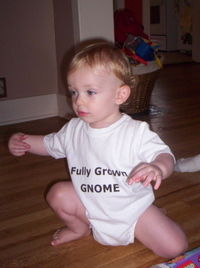 (The shirt says "Fully Grown Gnome" and was a first birthday gift from the Grill Master, Pie Goddess and family)

While he isn't quite fully grown yet, he sure does like cake. 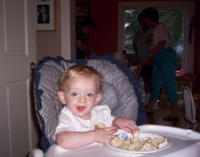 And, now, to nap off the sugar high.

When I worked at Metro Pulse, one of the sales dudes (and, dude, if you met him, you'd call him a dude, too) would take a lap around the cubicles chanting bits of this everytime something good happened to him. And, sometimes, when something bad happened to him. But let's focus on the good.

If you go to your local seller of magazines and find the Elle mag with the pleaseeatapie skinny Kiera Knightley on the cover, flip to page 124. There, in all its glory, my new phone book for the day, which would be a reader's review round-up with The Book as one of the titles. I'll post a link when it is online.

Things are going to start happening to me now.

1) I will be signing books at the Wilber Mansion as part of UCCCA's Artwalk Oneonta. I'll be just across the hall from the Garden Club. Please drop by if you're in the area. I'll let you touch my knitting.

2) Short Review in the Boston Globe on Sunday. Scroll down. Who knew the Book was "sharp, sassy with a hint of rue?"

At her 4 year check-up/shot appointment, I mentioned that I would have thought her "Toddler Tummy" would have left by now. (Those not familiar -- toddlers tend to have big ol' bellies that disappear as they age.) Given how skinny the Diva is, we've been surprised about her belly. I mean, it's a cute belly, but it shouldn't be the biggest part of her.

Her ped, who is generally a conservative guy who tends to want to wait to see if problems without specific causes resolve themselves organically, recommended a blood test just to be sure. It could be celiac disease, he said. Then he mentioned some other symptoms, which the Diva doesn't have. There also doesn't appear to be anyone else in the family with it, so her odds of having it are low.

Despite those odds, the blood test came back indicating a high likelihood that she might have celiac disease. The blood test is only sorta accurate in kids under age five, so we move on to phase two, which is a trip to Binghamton on Tuesday to see a Pediatric Gastroenterologist, which I dare you to say five times fast. We're not entirely certain what will happen next. At best, he'll just suggest that we change her diet and check back in a few months. This is unlikely. What will probably happen is that he'll want to biopsy her small intestine, which is about as invasive as it sounds.

In the good news department, if kept under control, celiac disease isn't life threatening and is merely a pain in the ass. Given how young she is, a decent treatment might be found in her lifetime. There are much, much worse things to have. This is a bump in the road. Qure sera, sera.

In the bad news department, I wish my first baby didn't have to deal with any of this and that I could make it all better. But I am helpless, here.