Quick explanation: there is no hidden meaning behind this other than it was the first song about Chicago that popped into my head. And speaking of the Windy City, I will indeed be reading in a bar there as part of the Bookslut Reading Series on Jan. 24. And, yes, that does mean that I went to Austin in August and Chicago in January. You are correct. I am not that smart.

Time keeps sprinting away from me this week.

Tim's Take on the Bravo website is finally rendered in a color that is actually readable. Huzzah!

As it turns out, Sarah Vowell also has celiac, which is just another reason why I need to meet her.

Bill Buford, whose Heat you should buy if you like food, takes on the Food Channel.

gluten and your ears

Evan Kleinman's Good Food on KCRW is my new favorite podcast. As much as I love the unctuous Lynne Rossetto Kaspar's The Splendid Table, Good Food is actually fun, rather than densely informative. Last Saturday's (9-23) installment, for thems that care, has a segement that concerns food allergies and celiac, which starts around minute 17. If you have the ability to listen online, it's worth an few minutes of your time.

Also, should you need it, the next to last segement is about entertaining kids on a rainy day with stuff you can find in your panty.

Again, Emily, look away. It'll be done, I promise.

The good news: I just started Chart #4 aka The Last Frickin' Chart.

The bad news: I managed to work the first row of said chart to the middle bit before I realized I have three extra stitches that have popped out of nowhere. Let the tinking commence.

I was flipping through the notebook that I took with me to Austin. I wasn't actually looking for notes, mostly because I know that I almost never take any no matter how good my intentions my be. What I was looking for was a blank piece of paper on which to write a list of my current knitting projects.

Anyway, what I found was a scrap of note that I don't know that I'll ever be able to work into anything else and, so, rather than waste it because it does amuse me, I'll jam it in here. It's about the trash bin in the Atlanta airport. They are R2D2-sized (or, for the differently abled, just on the smallish size od a Dalek) and all black. When you toss something in they "rattle and shake like your trash is being devoured by a small monster or jets of flame. I just keep waiting for puffs of smoke. Kids stare at the things with mouths agape."

And there is your bit of whimsy for the day.

Oh? And the knitting list? Very long. Long enough that I hesitate to add anything to it, despite my desire to do so. Feh.

It finally came to pass that I had to drag out the sewing machine and finish up some projects. I did this simply because one is for a birthday -- and I can't show it to you yet. But while I have the machine out, I made some headbands from Heather Bailey's awesome pattern.

One for the Diva: 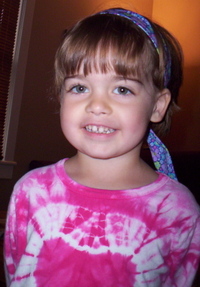 And the reason why my photos always look ill-framed and blurry:

Twelve Facts About the Immigrants: A Prose Poem
by Carmine Sarracino, from The Idea of the Ordinary

Twelve Facts About the Immigrants: A Prose Poem

They were not Italiani, but rather Calabresi, Siciliani,
Napolitani, Abruzzesi and would remain so until they died in
places like Providence, Rhode Island and Hershey, Penn-
sylvania.

They thought that "Italia" was the name of the King of Pied-
mont's daughter.

They did not believe that they'd find the streets of America full
of money, but enjoyed saying so to those staying behind.

The men knew how to cut stone, how to lay bricks, how to fish,
how to coax fruits and vegetables from rocky soil, how to strike
fear into the hearts of oppressors.

The women knew how to cook, how to keep house, how to
raise children, how to coax fruits and vegetables from rocky
soil, how to strike fear into the hearts of husbands.

Their name for Ellis Island was La isla d'lacrime, "The island
of tears."

They began life in the new world shunted through chutes from
holding pens to processing stations on the modern model of
efficiently slaughtering livestock.

Some with bad eyesight, pinkeye, or glaucoma were chalked
with an "X" and shunted to a pen to be shipped back.

Others, baffled by the question "Are you an anarchist?" went
with the more agreeable answer, and then wondered why they
were marked with an "X" and shunted to a pen with the blind.

They believed with all their hearts in the pursuit of happiness,
and had pursued it all the way to this maze of chutes.

On the boats with kerchiefs around their faces and caps with
the earflaps pulled down waving tiny American flags and
smiling with slightly bewildered eyes, they all looked just like
children.

* Orbitz, bless their captialistic hearts, sends me weekly email about their travel deals. This week's was Vegas and it took a great deal of restraint to not drive to Albany and hop on a plane. I have no interest at all in gambling -- really it's just a tax on people who are really bad at math -- but would dearly love to do some shopping and eating in fabulous environs. The sad thing is that it is cheaper for me to fly 3-4 hours to Vegas for a weekend than it is to drive 3-4 hours to NYC to spend a weekend doing the same things that I would do in Vegas. Sad, eh?

* The shoe saga has found a temporary end. In my size they look less like cute little pilgrim shoes and more like Frankenstein running from the angry mob shoes but they were the most comfy item that Sport Tek, my local shoe store, had. My hope is that one day I will find something as comfy and much, much cuter.

* Because of Ms Lynn's praise, I joined the Button of the Month Club. My robots just arrived. Not sure what I'll do with them but, damn, they are cute.

* The Diva's daycare/preschool has been awesome when it comes to dealing with the Celiac thing. They have come up with solutions that I haven't even considered. Like, for instance, rice cakes, which the Diva loooooves beyond all rational thought and which make a great base for pizzas, sandwiches and snacks. Genius, I tell you.

In addition, some other resources have been beyond valuable. Like Gluten-Free Girl, who will soon have her own book out, and who recently provided a list of other great online resources. She and other bloggers are helping me move past one of my biggest peeves, which I also have with older vegetarian cooks. If I wanted to eat something that looked like meat, I would simply eat meat. If I wanted to eat something that looked like wheat but didn't come close to it in terms of any other sensory input, I would just eat wheat. Don't keep trying to give me fake bread or fake ground meat. Celebrate what is on the menu and stop making it look like other stuff.

* The Featureless Saint's birthday is coming up. I have no idea what to get him. Anyone have anything that has worked for them?

* I have had an epiphany in terms of my freelance magazine work. Said epiphany is this -- there is no magazine that caters to the kind of mom/writer/woman I am. I am not hip enough for Bust. I am not mommy enough for Parenting or Parents (and also suck ass at writing the "Ten Tips on Closets" features.) I am not rich enough or settled enough or *something* enough for Real Simple. Weird moms have no magazine; therefore, I have no one to pitch to. I suspect we have no magazine because we don't buy enough stuff -- but that is another issue for another day.

* W/r/t the Diva and Celiac: it has become her excuse du jour for why she can't do something. For example: "I can't pick up my jacket/go to sleep/eat a carrot because I have celiac disease."

* There is a children's book writer named Clem Martini. I must meet him.

letters that won't get a response

Today would be a fine day to send some positive news in my general direction. I know, I know. All I can control is my response to you, the Universe. Still, if you could throw me a bone here, I'd appreciate it.

Your work is gorgeous. I am in awe. I am also feeling that I should just stop knitting right now because I will never ever match the glory you have achieved. I am aware that this is a personal failing and not your fault but I just thought I should mention it.

Dear students who live in Oneonta,

I know that college is a fun and exciting time. I know that you are young. I know what you do on the weekends. I think it's great. Soon enough you'll have actual problems and responsibilities. Enjoy yourselves now. Used condoms, however, belong in some kind of trash bin and not on the sidewalk for all of us to admire. Some mornings, you can't walk a block without spying another sad display. Yes, yes. I know you are proud of your conquests but, if nothing else, your inability to find another hole to put such things in is really grossing me out.

Knock it off,
-Professor Martini

Pick up your shit or you will be living in the fucking garage.

This picture pulled me one whole step away from the edge. That could change any moment. You are on notice.