The Defective Yeti stumbles upon a fundamental truth of parenting.

It is amazing what a difference 24 puke-free hours can make. I almost feel human again and ready to take on, well, not the world but the laundry, at least.

In Knoxville, it was Annie O'Dowd Gray. In Austin, it was the aptly named Joy Sablatura. Here is is Faith Rice Klein, who practices with Karen Michael Maerz (who is also good) out of Peralla Wellness Center on the Hartwick Campus. No, you don't have to be employed by Hartwick to use 'em. I asked.

I'd made the appointment weeks ago and almost canceled last night because I wasn't sure I'd have the energy to go. And to be cliche -- I'm glad I went. O! How much better I feel.

I have one quibble, however -- and this is a quibble I've had with virtually every massage therapist everywhere. Why must insipid new age music be played? I've heard everything from pseudo-Native American songs to tinkling bells to wind with tinkling bells and bad synth. Why not play music that has been churned out by some Yanni-wannabee in a strip mall in Van Nuys?

Again, it's a quibble. FWIW -- when I was in massage school (long story) and doing my student massages, I tended toward background music like the Anonymous 4 or various other sorts of Medieval/Gregorian Chant. Really, anything that stemmed from a long-standing musical tradition seemed to work, as long as the lyrics weren't in English and the tempo wasn't too bouncy.

Also good would simply be a recording of a thunderstorm. Not one of those fancy-schmancy sound machine thunderstorms or a "thunderstorm" that is interspersed with bells or digereedoos, but an old-school, mic-out-the-window thunderstorm. I'd be so down with that.

I'm sure this is just a personal thing. But I've always found it curious that most massage therapists play the same sorts of CDs. I don't recall there being a section in the handbook about it. Perhaps it all just says something about who tends to be successful at massage (I sucked at it) or what most clients expect or what people tend to notice when naked.

I'd think about it more if I weren't so blessedly relaxed. Must go float near the laundry...

And so last night, just as I was putting dinner in the oven, the Boy barfed all over Scott. What followed is 12 hours of continued barfing, broken only by 45 minute naps every 3 hours. I will spare you the details, save for this one phrased as a question: anyone know how to get barf out of a woman's fleece slipper, size 9?

Holy crap I am tired. As is Scott.

Today, after a couple of naps (for the Boy, natch, since Soctt and I are working and doing that last minute makeshift routine of schlepping the sickie to campus so that during my classes, which I can't cancel so close to finals, Scott or a benevolent coworker can hold the Boy) and some juice and milk (which have started staying down again), the Boy is on the mend. Scott and I, however, are still very, very tired. Verily I say unto thee -- holy crap we are tired.

Of course the puking happens during tech week because it is just so much more fun that way.

With any luck (ha!), this should be the last of the Boy's illnesses for a bit. It's about time for Maddy to get good and sick, which should happen any second now.

shameless self-promotion, number 255 in a series

New column up at Austinmama and this one is about my latest parenting theory...

Some other odds and ends, some of which are related to the children:

Maddy and I were watching Disney (or maybe Noggin? I hadn't had any coffee yet.) and a video by our favorite Funny Hair Guy came on. We both sang along, of course, because it's good music, even if it's aimed at smaller ears. And I got to thinking about the music I listened to as a kid. She gets an ex-Del Fuego, They Might Be Giants and Jason from Jason and the Scorchers; I had a Free to Be You and Me soundtrack, Disney's Greatest Hits and several albums by Little Marcy, the puppet for Christ.

Two things spring to mind: first, The Diva is seriously getting the better deal and second, it's a wonder I'm as sane as I am.

Also over the weekend, we went up to the Farmer's Museum to walk around and ride the Carousel. I'm not a big fan of carousels -- they make me queasy -- but the Diva loves 'em. My expectations for the Empire State Carousel were low and I expected the kitsch factor to be off the chart. Instead, it was lovely. Still made me queasy, tho.

Finally, I feel a batch of these cookies will be in my future. Oh, yes. You will be mine.

Now back to writing a grant. Woo.

I would like this trip for Christmas. Not that December would be the best time to drive around Iceland...

Unlike Dan Renzi, from who I stole the link, I have the Husband. What I lack is the money and time. Actually, I really just lack the money. If I had that, I could make the time.

Perhaps Dan and I could pair up ... any media outlets looking for one potentially wacky-ass story about a former reality show cast member and intermittently insane memoirist driving around the coast of Iceland looking for geysers?

and so there was turkey

A good holiday was had. Hope yours was the same.

Perhaps the highlight was getting to see my dad and hear tales from his recent trip across the Pacific, to the land of Shoji screens and Shinto temples. Gift from that far away place were distributed. I love mine --a robe that is finished with simple but exacting detail -- and Scott's -- ditto in more somber colors. But for some reason, it is Maddy's fan that I keep pulling out and admiring, simply because I love the colorway and patterns.

I am particularly taken with the green/cream bit in the robe -- but the whole thing cries out from some sort of crafty interpretation. I am also trying to convince Maddy that it needs to be displayed in my (and Scott's, natch) bedroom rather than hers. She is resistant, to say the least, and bribery might be in order.

Sorry about the quietness. Yesterday, we made the trip to the P-GENT in Binghamton to have the Diva's belly rechecked. And, lo, there was much rejoicing. In four months, she gained four pounds and grew an inch. Now, if you or I had done this in four months, it might be cause for alarm. But for the girl to have done this, it is cause for riotous celebration. We are most pleased.

The only bad news is that it does appear that she does without a doubt have celiac. But we carry on.

Mooch, who usually shuns the children because they are unpredictable, has decided that any warm body will do now that winter is here. 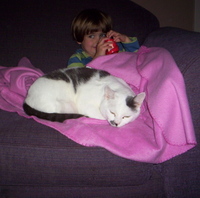 Speaking of winter being here --

Four weeks ago, I decided to be proactive and have a window replaced. One of the windows in the Diva's room was cracked when we moved in. At some point during the summer, when we had the window open, it came crashing down. The good news was that no one was in the room at the time, since the bad news was that the pane of glass that was cracked shattered into dozens of pieces and littered the Diva's bed. Since that day, the hole in the house has been covered with a piece of cardboard.

But since winter was coming...proactive. So I went to the new Lowe's, because it was just one window and I didn't really want to monkey around with someone who would try to sell me a houseful of windows. Just one. Plus, going to Lowe's is still fun, since it is new.

And so began my odyssey, which is still continuing. First, just getting one of their installer's here to measure took a week. Then, I went and paid for the window and was told that someone would call to set up a time to actually put the window in within 48 hours. Three weeks later, I still hadn't received this miraculous phone call, despite my having called every couple of days to figure out what the hold-up was. Each time I was told that someone would call back within 48 hours. After three weeks of this -- and with night temps now in the 20s -- I sent in the spouse, who was also roundly blown off.

Then I emailed corporate. On a Sunday. And within two hours of hitting send, someone from the local store called to let me know that my concerns were being addressed. The next morning a new installer called to set up a time to measure, which she will be doing today. Allegedly. Because here's where it gets really annoying.

Am I wrong to think that isn't my job? I mean -- I have no problem breaking bad news but, seriously, this doesn't seem like my bad news to break. Fucking Lowe's. All I want is to not have a brisk wind blowing through my kid's room.

This is my penance for not shopping locally.

Because all of the cool kids were doing it, I made bread.

The recipe is the no-knead one from Bittman and Co. that has been making the rounds.

In terms of ease, you really can't beat the Bittman. In terms of results, you can. But when you weigh one against the other, I'd do it again -- but make two corrections.

First, I'd flour the hell out of the bottom towel. I thought I'd dusted enough, but clearly hadn't when the whole mess held fast when I tried to dump it in the hot pot.

Second, I'd use a smaller pot. My LeCruiset  Dutch Oven is the 8 qt. variety, which made a loaf that was less of a dome and more of a humped pancake.

Tasty, as far as humped pancakes go, but the texture was slightly odd.

Also on a food note -- on Saturday night we went to Hartwick's Organic and Local Grassroots dinner. Which was fun because of the folk we got to hang out with. The food was rather meh. I'd pay good money for someone to do a local/organic/grassfed dinner and who could do food that made you wax rhapsodic. Still, tho, the evening was fun. And there was excellent cider and excellent-er ice cream.

But on the topic of grassfed cows (and other ruminants with four (or five -- whatever) tummies), the great Harold McGee has been mulling over current claims about the content of certain beneficial acids in their meat. Love McGee -- and he is answering all sorts of questions (like the one about green potatoes) that I've long had.

from the "huh." department

Jerry Jeff Walker ("Mr. Bojangles," "Hill Country Rain," and any number of other songs abut Texas) is from Oneonta.

I find this surprising, is all, and had to share.