The book is 1,067 pages long and there is not one lazy sentence. The book is drum-tight and relentlessly smart and, though it does not wear its heart on its sleeve, it’s deeply felt and incredibly moving. That it was written in three years by a writer under 35 is very painful to think about. So let’s not think about that. The point is that it’s for all these reasons—acclaimed, daunting, not-lazy, drum-tight, very funny (we didn’t mention that yet but yes) — that you picked up this book. Now the question is this: Will you actually read it?

-- From Dave Eggers' (he's everywhere!) foreword to the new paperback edition of the brilliant Infinite Jest.  And, even now, ten years on, David Foster Wallace's masterwork only shines more brightly.

And because I have more time to surf -- this picture made me want to gouge out my eyes with a fork. Seriously. If you value your binocular vision, do not click here.

Thanks a lot EW Popwatch. Bastards.

Suddenly, the snot rang out

It appears that the boy is going to follow that same pattern set by the girl, which is spending your first real winter as a toddler getting every last illness that comes around. The upside is that the girl rarely gets sick now -- other than the "self-hating small intestine," as matthew put it, which is something that will be chronic, rather than acute.

For her, tho, it was ear infections. For the boy, it is sinus infections. And, this go round, bronchitis. It is never good when your kid sounds like a barking seal.

I spent most of yesterday with a barking, snotting, whining kid on my lap watching Blue's Clues. If I tried to do anything else, there was much complaining. Today promises to hold more of the same.

To add some insult, just as I thought I might get a reprieve, when the boy drifted off into a rest at bedtime, ten minutes later the steroids he was given for the hack kicked in, which meant that he was up and just dang perky until midnight. Fortunately, the steroids don't make him mean like they do his sister, who I swore was going to bite the heads off of unicorns and kittens in between fall-on-the-floor-screaming fits. No, the boy was rather charming last night, if awake. He was like a little Rachel Ray.

Anyway. That is where we are.

The boy will visit with Scott on campus while I teach, then we'll go back to slouching on the couch.

Speaking of the teaching -- Thanksgiving break can not come to soon. No. Indeed. It can not.

Stolen from Another Knitting Blog

And while I have your attention -- if you are a local (to me, that is) knitter and want to get your knit on with others of a like mind, we're meeting at the Knitting in All Together in downtown Oneonta on Wednesday evening, starting at 6. Email me if you need more info.

Also -- there is a group for local (again, to me, because it is all about me) celiacs and those who love them. It meets the second Monday of each month and more info is here. The website is still in progress -- but will get you started.

I've gotten addicted to the weekly NPR book podcast. Not so addicted, mind you, that I get to them the day that they are uploaded. Which is why I just now heard the Halloween week edition, which featured (among other things) Dave Eggers' new book What is the What.

While I'd known about the book's existence, I'd been avoiding it because Eggers' gets on my nerves. There's something both condescending and precious to his past works that I can only handle in small doses. I only listened with half my head at the start of his interview, then nearly fell the frak over when I heard Allegheny College, my alma mater that no one has heard of, mentioned. Turns out, the Sudanese Lost Boy who is "profiled" in What, Valentino Achak Deng, just matriculated there.

Which just offers further proof that 'gheny grads are quietly taking over the world. Watch your back, Harvard, we're coming for ya. 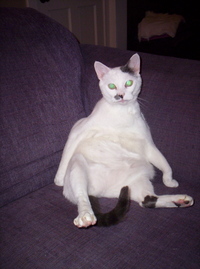 shameless self-promotion, number 254 in a series

New developments on the Blankie front, from this weekend's Daily Star.

what I did yesterday 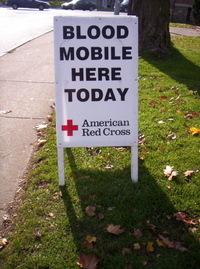 I was inspired by the Traveling Knitter, who has instigated her own blood drive, and sucked up my courage yesterday. Donating blood is one of things that I always meant to get around to -- and, no, I didn't do it for the possibility of winning yarn. I don't even plan to enter the random drawing.

No, I did it because -- unlike cash to send to charity or time to spend volunteering -- I have plenty of blood and can easily make more. And I want to feel like I can do something of use for a stranger.

The older woman at the check-in was knitting a pink mitten, however, which I took as a good sign.

As for the donating, it wasn't so bad. But you also have to keep in mind that that description is coming from a woman who has had two needles stuck in her spine while birthing two separate babies. Compared to that, ten minutes bleeding into a bag is a cake walk.

I did startle the techs by breaking out in a cold sweat, going completely white and almost throwing up just as they were pulling out the needle. A small sip of juice and all was right again. Note to self: eat more breakfast next time.

Spent the rest of the day feeling plumb wore out, like I'd lost a pint of blood. Better today and by tomorrow will be back to my old peppy (hah) self.

So there you go. Nothing exotic -- just the gift of life.

ETA: I donated in Oneonta at the Baptist Church on the corner of Maple and Main -- you know, the one that just had its stained glass windows refurbished. If you are looking for a blood drive, the NY-Penn lists local ones here. If you aren't local, go to the American Red Cross site for more info.

"Here in South Carolina, where the hangovers come quickly and often, the cures are mind-numbing and questionable. Every good booze glutton has probably tried the standbys: two gallons of water, enough Goody's Powder sleeves to construct a lifesize origami swan, Krystal hamburgers, hair of the dog, and a slew of over-the-counter, sure-fire remedies usually sold next to condoms, batteries, playing cards, and scratch tickets at the local convenience store."

I know I'm behind the curve on this, given that the issue came out in Spring 2005. I picked up a copy at the Southern Festival of Books in Memphis a month back and am just now getting through it.

As much as I love some of the individual pieces, like the Singleton essay quoted above, I'm having some big bad issues with the issue at hand. It appears, according to the OA and guest editor John T. Edge, that women aren't able to write about Southern food.

If I've done the math correctly, of the 48 bylined pieces listed on the TOC spread, 7 pieces are created by women. And two of those are photos essays by the same woman, Debbie Fleming Caffery.

So, what, women don't eat in the South? Or don't write? Or don't write about the cultural significer of Southern food (you know -- pigs, biscuits and pawpaws) in ways that appeal to John T. Edge? What am I missing here? Explain it to me in very small words how I shouldn't find it alarming that less than 20 percent of the issue's writers are female?

While I'm on the subject of puzzling periodical editorial choices, I also picked up an issue of Kiwi a couple of weeks back and won't pick up another. The line between editorial and advertising is a thin one in Kiwiland and I don't need to pay $4 to read stories that predominantly feature the magazine's advertisers. I'm funny like that.

In a bit of news that has nothing to do with magazines -- I'll be doing something tomorrow morning that I've long thought I wouldn't be able to do and that I'm just a little bit afraid of. Details if I make it.

And, no Dad, I will not be skydiving.

Confidential to the person who found my blog with the search string "celiac miracle." I wish I had something for you. I do. I wish I had a celiac miracle for the Diva as well. I got nothin'. FWIW -- now that we seem to be on top of the diet -- we'll know for sure how we're doing right before Thanksgiving -- there has been a minor sort of miracle in that the Diva has about five times as much energy (lord help us) and seems to be a much more content kid now that she's not in constant discomfort. Also the diet is more a pain in the ass than a real burden, even more so now that savvy restaurants realize that celiacs like to eat out, too. One such is the great northwestern PA chain Eat 'n' Park who now has a Celiac-friendly menu.

Now if they could just make some gluten-free smiley cookies, all would be golden.

Still, I wish there were a miracle. I also wish I looked like Heidi Klum. Life is random and unfair.

In order to keep my mind off of my non-Klum-ness, I have become obsessed with a new hobby. Let me introduce you to the "Winter Pot Sampler." (Dude .... you'd be surprised what all you get when you google that string...) 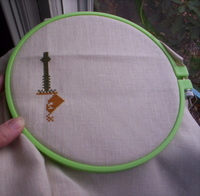 (This done on 32-count linen. Ultimately, I'll do the whole set. Don't hold your breath, tho.)

I've run out of Subversive designs that call to me and felt up for a new challenge. I haven't forsaken the knitting -- oh, no, not at all  -- but need to be mindful of my ever aging body and, more specifically, my creaky old right thumb, which pains me when the weather is damp. Seriously.

What I want, however, are cross stitch blogs that have the same zest and 'tude as knitting blogs do. So far I've only found the Stitch Bitch. Anyone got any recs?

In other news, today is the day that I make lists of all of the things I've forgotten to do lately. While my memory has never been what one would call a "lockbox," it has been particularly leaky lately. If you know of anything I was supposed to do but didn't, please speak up.