Our first year in Austin, the Faceless Saint and I were beyond broke, in that way that you are broke your first year out of college and one of you is in grad school and the other is working a shitty job at a Crate and Barrel knock-off in the mall.

It was our first real Christmas together. There were no plans to go home, partly because we were beyond broke and partly because Austin is so very far away from everywhere else that isn't Texas.

We got our first tree and huddled together in our wee little rathole that always smelled of natural gas because the pilot light on the hot water heater never ever stayed lit. And we made waffles.

The reason for the waffles is simple. That aforementioned shitty job that I had had gotten significantly shittier during the run-up to Christmas. It wasn't the holiday retail crowds -- those are kinda fun. It was the fact that my paychecks had started bouncing. Merry Christmas indeed.

So all of the assembled employees -- a certain Violently Executed Blog-man was one as well -- started to take out our pay in merch. Like, say, wafflemakers.

And because of such crime, a tradition was born. Each Christmas since, which we have spent together, we have made waffles. That first wafflemaker is no longer with us, sadly. Nor is the Crate and Barrell knock-off in the mall. I quit the day the tax assessors padlocked the front doors. Last I heard the owners were being sued by the actual Crate and Barrel for trademark infringement.

This year, the waffles were gluten-free. Let's just say that the recipe needs some dialing in. It would be polite to call them "leaden." 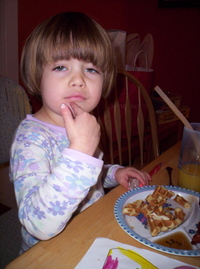 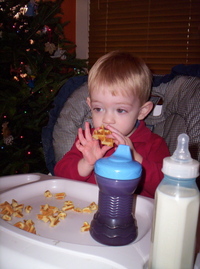 On that note, we are out for a spell. See you in the new year.

day late but not a dollar short

From our squirmy munchkins to you and yours.

Hope your holidays were happy!

No gnomes were harmed in the making of these snaps. 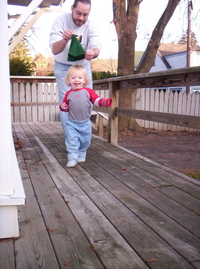 More updates once I can find the living room floor again...

Some things about this parenting gig are harder than you might imagine. 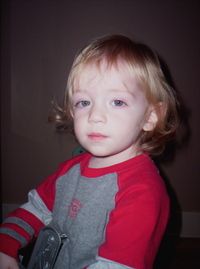 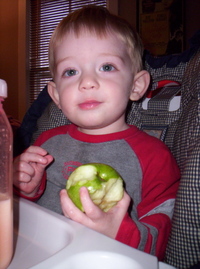 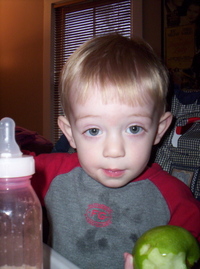 But it has become comfortable to me to think that holidays mark the passing of time. That we make our families anew every year. It's no coincidence that this is the darkest time of the year and in many ways, the hardest. It's such a triumph that so many of us have such good associations.

There's just something about this quote that resonates with me. About the making of families anew each year. Smart woman, that McHugh.

First, I have a fairly high tolerance for whining children. Ditto screaming children. Ditto crying children. However, there was a kid there who managed to achieve a hellish combination of all three that was truly nerve grating. You could hear said kid no matter where you were in the store. There was one point where I considered jamming a sticky bun in her mouth just to get the noise to stop. I also pondered smacking the crap out of her mom --  not that it was mom's fault but I could slap her without seeming like a total grinch, unlike if I slapped a three year old. Lordy.

Second, is there some new rule that Rachael Ray has to be on every box of crackers currently made?

Posting, naturally, will be light and sporadic over the next couple of days. And then, after x-day, we shall begin the road trip to our respective ancestral homelands. When in Rochester, I think we're going to have to get take-out from Piatza's Pizza because LJC speaks so highly of it. Then, while in da 'burgh, if time permits, I might have to go to Primanti Brothers.  Who's in?

i love a good simile

PL sent these to me and, of course, I just had to share. I'm not certain that I believe that they come from actual student papers but am willing to suspend my disbelief for entertainment's sake.

Here are two sets, with some overlap:

Set one: She grew on him like she was a colony of E. coli and he was room-temperature Canadian beef.

Set two: She was as easy as the "TV Guide" crossword.

I forgot to mention yesterday that as part of my perambulations about town I went to Da Vida, which is a local store full of fair trade stuff. I was buying gourmet soap for the aforementioned teacher gifts. As I was checking out, the older woman behind the counter looked at my check and said "you're the lady who writes for the paper."*

"You're taller than I thought you'd be."

I'm still not sure how to take this. The picture that runs in the paper is a head-and-shoulders shot, closely cropped so that there's really nothing from which to gauge scale. I guess I just have the head of a short person. Or the hair of one.

* This used to happen in Knoxville, too, although what followed was rarely complimentary. Usually the next thing out of the person's mouth was something about how we were all hell-bound liberals or stupid fucks who don't know good music/movies/art or destroying the city's moral fiber. It's taken 3 years to not flinch when someone says "don't you write for the paper?"

Stolen in a roundabout way from Adam.

Today I did something that I have never done before.

Today, while Christmas shopping in the local mall (called, affectionately, "the small"), I stopped into the Borders Express to pick up a gift. Of course I looked for The Book, which is on an endcap in the Local section, which was pleasing enough. I made a mental note that if they weren't busy and if I had the courage that I would offer to sign backstock. But I didn't think I actually would, because it seems awfully presumptuous to sign stuff that no one has bought.

When I got to the register, I saw a couple copies of The Book right there, in prime impulse buy position. And so I blurted out "heythat'smybookwantmetosignbackstock?" The answer was yes, which stunned me, and the cashier seemed more nervous than I was about the whole exchange. He also had me inscribe one to him.

So if you are local and looking for a copy, there are a couple at the Borders Express in the Small. They are signed and everything.

Unrelated -- rent Kiss Kiss Bang Bang. It's dead funny -- and proves that Val Kilmer should return to his Top Secret!/Real Genius days where he didn't seem like a pompous ass and was fun to watch. Kiss Kiss etc also proves how awesome it is that Robert Downey Jr. hasn't OD'd and is sober enough to work.

a partridge and a chest x-ray (note: random image and not the film of the Boy in question.)

Because life in the house is no fun at all unless one of us is seriously ill, the Boy got to have a chest x-ray yesterday. By all accounts, he hated every minute of it,  mostly because they forced him to keep still in an iron maiden-y sort of device. Keeping still sucks ass, in Boy-land.

As it turns out, he does not have pneumonia. Thankfully. Nor does he appear to have TB, which I suspect they tested for just for form's sake, rather than out of concern that he did have it. He still has to have the spot where the test was done looked at tomorrow. But I'm thinking if it were TB, he'd act like he was ill, rather than like a monkey on speed. Which is what he generally acts like.

The tentative diagnosis is that he is probably a touch asthmatic, which may be due to the season or an allergy or bronchitis or all of that plus more. We now embark upon a fun-filled regime of inhalers and steroids. Woo.

Still, you'd never guess to look at him. Or, more likely, be climbed by him.

For those keeping score at home -- we now have one kid who can't eat and one kid who can't breathe. And a partridge in a pear tree. (Actually, I'm kidding about that last one. There is a Trout in a Christmas tree, tho.)

In terms of the impending holiday -- I am in my usual state of panic where I realize that there are people who need gifts but that who I have forgotten. Like the kids' day care teachers, who we love. Frankly, the gift they'd probably find most helpful is a big, fat raise but that is beyond my power to give. I'm making some knitted warshcloths and will include bars of "gourmet" soap -- but still feel like its not enough and that I should just stuff an envelope with cash I don't have to spare so that I can assuage my guilt over letting someone else take care of my kids.

I suspect given my current mood, which would be disgusted and uncharitable and oddly sad, I should just go lay down. I was, however, briefly cheered by the arrival of the mail. Our letter carrier has taken to playing Christmas music on portable radio as he makes his rounds and I was serenaded by Sinatra while the mailman dropped off our day's bills and cards and flyers. He is also wearing a Santa hat and, I believe, bells.

shameless self-promotion, number 258 in a series

Quickly, now, while I figure out what to tackle next -- latest column from Austinmama is right here. It's all about listening. Which I don't do anymore. Not really.

Great job! There's nooooo doubt about it. You're from Da Burgh. You deserve a reward, so go have an Ahrn City or two. And GO STILLERS!

How Pittsburgh Are You
See All Our Quizzes