The continued presence of the children has driven me to poetry. Not written by me, mind. I'm not a poet. And my feet sure show it. They're Longfellows.

It's worse than I thought.

Anyway, poetry, not by me:

"Who are these people and what do they want from me? I want them to shut up and go away, go away to some other place where some other person, a non-knitter, will feed them and entertain them.

I am not snowed in knitting. I am snowed in cooking, and talking, and playing games and maybe later, much later, when the snow starts melting, I'll get to knit."

-- from the Opinionated Sheep, who understands my pain.

We are now on Day Three of our imposed snow holiday. The weekend comes. When will I knit again? When will I complete a thought without hearing the dulcet tones of "Mooooo-oooooom!" And will it be before I build my own private igloo in the backyard? Send help. And plows.

I'm not usually one to pass these sorts of things along because my heart is black and bitter. However, I'm all about putting books into the hands of those who need 'em. And NOLA still needs 'am. Please read Colleen Mondor's articulate plea here and do what you can.

Even in a place that is used to large amounts of snow, 27 inches in about 24 hours breaks the system. Most of the city is still closed, included SUCO and Hartwick, which means that we have another snow day. One is a fun, refreshing change; two gets on your nerves. We soldier on. Snaps from yesterday's St. Valentine's Day Snow Massacre... Maddy, watching the snow: 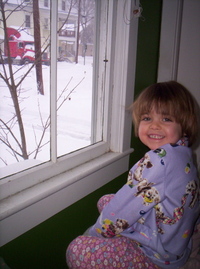 Maddy (pink snowpants, catching snowflakes on her tongue) and Caroline in Caroline's backyard: 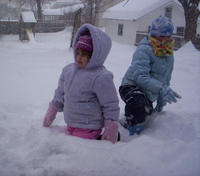 I suppose one of the more telling details is that the Department of Public Works in Oneonta just gave up at about 3 p.m. yesterday, simply because the plowing couldn't keep up. Things are better today. The view from the window at the top of the stairs, chosen because I lack the will to get my hat, scarf, boots, mitten, coat and another hat on again: 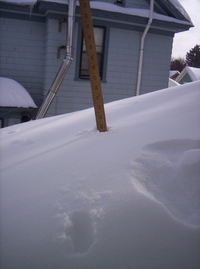 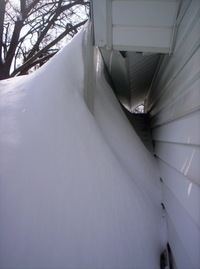 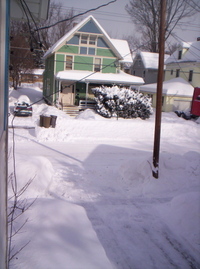 And, because it is the right thing to do when you are snowbound, Maddy and I made gluten-free brownies, which smell lovely. The batter was pretty tasty and, conveniently doubles as a facial cleanser:

And, now, the Mooch toss:

First, tho, let me reiterate that Mooch has a great life for a being who is the furry embodiment of eeeee-vil Think Bucky in Get Fuzzy and you're only getting close. As proof of his cushy life, this photo, snapped this morning: 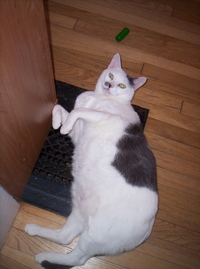 The toss itself, completely with delighted villagers:

To quoth the Featureless Saint, who said this right as I got down the stairs: we're going to need a bigger giraffe.

SUCO is closed, as is pretty much everything else. Good thing we stocked up on booze and chocolate yesterday. Could there be a better Valentine's Day? I think not.

Pixs (with, I suspect, a tossing of the Mooch) to come...

going to hell for this

By this time tomorrow, we should have 16 inches of snow. I, for one, can't wait. We will finally -- finally! -- have a some good Mooch tossing weather. What is Mooch toss? This is a Mooch toss. It'll be our first one in almost three years. Lordy, how the time does fly.

I'll also need to break out the snow giraffe.

In other news, news that stops your heart for a minute, Maddy turned to me this morning and asked, "Am I sexy?" My response was something along the lines that sexy is really something for older girls. She seemed content with that. The temptation was to have her go ask her father that question, simply so that I could watch his reaction. Seemed needlessly cruel, however.

And now to look for the giraffe...

Not only am I writing a syllabus for my class that starts tomorrow, I'm having ot restrain myself from going up and scouring out the inside of my head with some Comet because I can't shake the image of grown men and their daughters at Purity Balls.

Happy thoughts! Must focus on happy thoughts! Not men who want to know about the state of their daughter's hymen and use this event to force out promises that they will stay pure and clean to keep daddy's love. No! Happy thoughts!

shameless self-promotion, number 263 in a series

"In our business, we have some things that are geared toward men -- but besides a watch or a wedding band, local guys aren’t real bling."

-- Karen Miritello, Wolfe Wilde Goldsmith, from my gifts for guys V-day feature in the local almost-daily.

"If folks were sensible, would anyone get married?"

Mama snorted. "I suppose not." She added in a lower voice, "But if you start down a road you can't see the end of, there's a chance you'll find some dark things along it."

About to defend her choice for the hundredth time, Fawn paused, and said simply, "That's true." She stood up. "But it's my road. Our road. I can't stand still and keep breathin'."

the random, the good and the ironic

Before we move on to the knitting portion of this post, some random links:

-- When I found out that my Jon Stewart would be on Jack's Big Music Show, which is the only Big Music Show that both the kids and I adore, I DVR'd it. It was only this week that I realized why the bald guy singing the "Groundhog Song" was so hauntingly familiar; it is Steve Burns, formerly of Blue's Clues and currently still a cutie. I'm sure others noticed this long before I did -- but I kept thinking it was someone I went to college with and so was stuck on that track.

-- Neil Gaiman beat me to the punch on this story about The Vagina Monologues in Jacksonville so I'll just link to him.

-- Like Firefly, Kitchen Confidential was one of those shows that I didn't care for at first, mostly because the early episodes weren't the strongest ones. Both seemed to be hitting their stride right when they were canceled. Fortunately, Firefly came out on DVD and thousands of us were hooked. And, now, Kitchen Confidential is poised to do the same.

My Decadent Fibers scarf is finished. This is how I looked yesterday as I was stealing myself for a trip outside. Note scarf.

Since the ends were lace and out of a wool/mohair blend, they looked like wadded-up crap when first knitted. Ergo, blocking, which meant that I had to pick up the pincushion of death.

So named because Kid #1 "borrowed" it and moved all of the pins so that the pointy bits stick out. Honestly. Like trying to pick up a cactus.

My original plan for this yarn was a Backyard Leaves scarf but the yarn itself proved to be too colorful to do all of that patterning justice. So I ripped, promised to do Leaves another day and came up with my own damn pattern.

The body -- pictured here as the ends were blocking -- is courtesy Juno, who acquired it from the Harlot. It is a simple k2, p1, ktb1. Easy peasey and looks much more complicated than it is.

The ends are a leaf motif taken from Nicky Epstein's Knitting on the Edge. I knitted them separately then sewed them on. Cute, no?

The scarf, in repose.

Aesthetically, I'm quite pleased. I lurve the colors. I lurve the pattern. It all blocked out nicely. My eye finds it enjoyable -- no pooling or flashing or nasty seams.

Now for the irony, which you had to see was coming. Yesterday, I discovered that wearing it around my neck was like being strangled by barbed wire. It buurrrrrrns like the heat from a white hot sun. It's like pink fiberglass on my delicate neck.

I usually don't have a problem with wool, not even on my more sensitive parts. I'm thinking it might be the mohair, which is 45 percent of the yarn. It didn't bother my hands but I get all itchy when I even think about wrapping it near my head.

I should be more broken up about this. The process was so enjoyable that I can overlook the fact that the result is completely unwearable. I'm not bitter. No, really. I'm not.

Anyone out there with a neck of steel who wants a scarf? I'll even pick up the shipping.