You might have to click on the picture to see it full-size in order to read her shirt, which I wanted to get a picture of her in before she outgrew it. 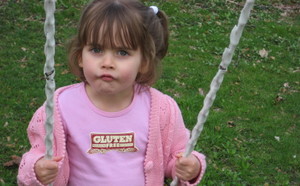 This is the face of a kid who is Gluten-Free. And almost *sigh* five.

Today was officially kindergarten registration day, which is where all of the rising k-garten kids and their parents tour the rooms, meet the teachers and take a quicky skills test (the kids took the test, that is. I suspect the test for the parents was just to get there.)

The Diva has made it quite clear that she is against this whole big school thing. She'll do it, since we've made it pretty clear that there are no other options, but has wanted it to be known is only doing this under protest and only because her parents have this crazy notion about school that she will deign to humor. Last night, she also let me know that today's events were scary, which is completely understandable.

As it turns out, once she got there, all was forgotten. All three of us sat and drew a picture, then she and her friend O. went skipping off to the playground. I figured we'd be in for a fight or tears or both when the guidance counselor led her away for the evaluation but -- nada. She actually smiled and waved at everyone as we were leaving and admitted that it will be fun to go there in the fall.

That doesn't negate the fact that Scott and I are completely full of crazy notions, in her opinion. Just that we're been given a pass on this particular topic.

shameless self-promotion, number 269 in a series

From yesterday's almost daily: Local genealogy resources and a familiar sort of column.

"Getting down on all fours and imitating a rhinoceros stops babies from crying. (Put an empty cigarette pack on your nose for a horn and make loud "snort" noises.) I don't know why parents don't do this more often. Usually it makes the kid laugh. Sometimes it sends him into shock. Either way it quiets him down. If you're a parent, acting like a rhino has another advantage. Keep it up until the kid is a teenager and he definitely won't have his friends hanging around your house all the time."

Look! I finished some stuff! Go me! 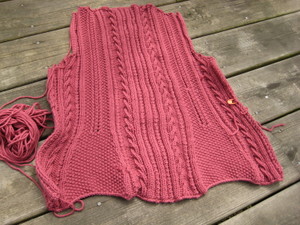 Nantucket back! (Yes, my plan is to use all exclamation points because am am that excited!)

Look at how gorgeous the photo is! 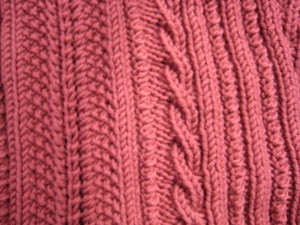 Cable-y goodness! ( I now have a macro setting but am still working it all out.) 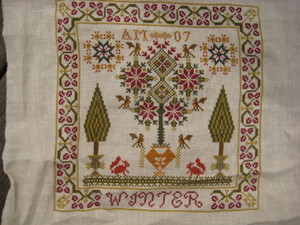 The "Winter Pot Sampler." I'm free at last! Well, free until I decide to do the rest of the seasons... 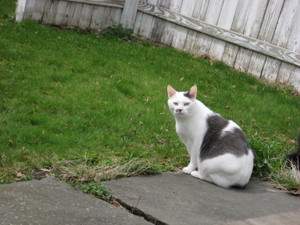 Mooch, who would like you to pay no attention to what he's doing in the yard. Nothing to see. Move along. These aren't the cats you're looking for. 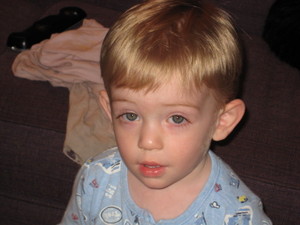 A couple of links, then I really need to work:

Amy singer went to my favorite yarn shop ever. One of these days, I'm going to stay at the Hotel San Jose. Just 'cos. Oh -- and Austin will always be one of my favorite places on the planet, contrary to what you might have read. But you have to admit that the summers are long and miserable. 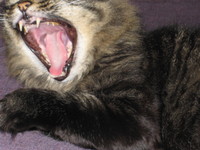 RUN FOR YOUR LIVES!

I think my new camera may be smarter than I am. But after a couple of hours of futzing, I'm starting to figure it out. It's way cool and stuff and I love it but it is much more complicated than the old cheap-ass digital that I had.

And that's today's news. *shrugs* Some days are like that. And some days there's pie.

You know how some mornings you just wake up and wonder about the futility of it all? About how it might just be best to give up already? To cancel every last thing you *have* to get done over the next few weeks? And to then just have a bit of a lie down and to play with the kids when they need playing with and to ignore everything else, simply because you don't know why you are really actually doing any of it?

Please tell me that's not just me.

Anyway -- that kind of day. Tired of tilting at windmills. Wondering why one bothers with, you know, stuff and work and knitting and stuff because, really, who the hell cares? Who would notice if I stopped?

It'll pass, I know. This is a momentary pity party and rather unbecoming. It lacks grace, is what I'm saying, and I'm all about grace. And is probably caused by the end of the term, a husband in tech, undergrads across the street who felt that bottle rockets at 2 a.m. were a fine idea as well as having far too much to do and not enough time to do it and, as a result, making more mistakes/errors in judgment than I'd like.

Tomorrow is another day. And I'll pick up the blog again then, so as not to inflict more of myself on others.

Oh -- and tomorrow there might be pictures from my shiny new camera, once I can figure out how to get them from there to here.

I am back ... from outer space. Just walked in to find you here with that same look upon your face. I should have changed that stupid lock....

Back from the trip to lovely Bowling Green, KY. A fine time was had by all. But more on that later.

The above is the good news. The bad news is that, while I had no problem making a tight connection in Chicago, my luggage was not quite as lucky. It is now in Albany, but will take the rest of the day to make it here, where I can love it and squeeze it and launder everything in it.

But that -- and classes and a bloodletting -- is all that's on today's agenda. Very exciting, I know. So -- here, something more exciting: Conde Mast Traveler paid one lucky travel writer, Mark Schatzker, to take a trip around the globe and blog about it. He's now in Istanbul (not Constantinople) but that link takes you to the start of the trip.

Kootie bolted to the left into the green-lit atrium, skidding and almost falling on the sudden smooth marble floor, and though he clearly saw the two figures who were sitting in chairs against the lattice wall he didn't stop running; he had seen the figures vividly but he hit the backyard door with all of his weight -- it slammed open and he was running across the dark grass so fast that he seemed to be falling from a height.
His hands and feet found the crossboards in the back fence and he was over it and tearing through ivy in darkness, getting up before he even knew he had fallen -- he scrambled over a redwood fence and then was just running away full tilt down some quiet  street.
His eyes must have been guiding his feet on automatic pilot, for he didn't fall; but in his head all he could see was the two figures sitting in the chairs in the atrium, duct-taped into the chairs at the neck and wrist and ankle -- his overweight mother and gray-haired father, mouths gaping and toothless, eyes just empty blood-streaked sockets, hands clawed and clutching the chair arms in obvious death.

Right now I am frantically trying to tie up dozens of loose ends so that I can go out of town for the Southern Kentucky Book Fest. It has been going about as well as one might expect.

If you're in the greater Bowling Green area, I'd love to meet you. As long as you're not crazy, natch, nor armed. You might also get the chance to meet my dad, who will be in the area.

Some levity:  I dare you to watch this video and not smile. The joy these guys have is contagious.

And, while I'm away rounding up my sundry headless chickens, an essay from Elizabeth Bear, whose books I'm going to have to give another try. My favorite bit is the last bit.

Dave Truesdale thinks that Imus and I are sisters in spirit.

He has a point -- I do need to offer an apology to the Japanese WorldCon committee. I wrote in anger and lashed out at the wrong people. I am sorry that I labeled you as "bastards." Mea culpa.

I do, however, know how the process works, even if it wasn't obvious from my column. And, no, I don't have much patience for online anonymity.

I also need to offer an olive branch to Naomi Novik. You are not a fern. You are a baobob tree. From this point forward I shall refer to you as such. :)

As for Truesdale and his allegedly maligned penis - I've  got nothing to offer. I don't know that we can agree on enough to disagree intelligently.  I will say that I am thrilled that there has been discussion about issue related to gender and the science fiction community as a result of what I wrote. That strikes me as a good thing.