[deity of your choice] bless the internets: creepy-crawly

I can do quite a bit from here thanks to the modern age. I have a laptop and wireless internet access. I can listen to tennis and deal with email and research a couple of projects and write stuff that doesn't require too much of my brain. (Some would argue that I don't use that much of my brain while writing in the first place. They, of course, can bite me.)

My mind still boggles a bit at how easy some things have become, thanks to the vast amount of info floating out there and easily reached with the aforementioned wifi. 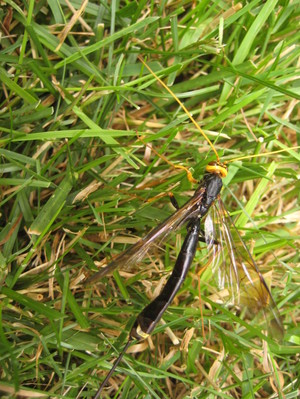 Since I had the camera in my hand while we were outside blowing bubbles yesterday, I took a picture of this bug (which I almost stepped on, much to the horror of everyone involved. (Maddy was horrified that I almost squashed it. I was horrified that there was a bug on the planet that is almost as long as my foot.)) with the sole intention of using the shot to ID the bug later. Yes, I am that kind of geek.

All it took was googling  "big identification," which led to this helpful site. I then googled the two possibilities and found some photos, which led me to this site on Ephemeroptra. So the bug above is a mayfly of some sort. I've been looking at other pixs so that I can figure out what sort of mayfly it is but I now have a strong cases of the creeps after looking at so many pictures of so many insects that I can't quite go on. It's enough to know it's a mayfly. I can leave it at that.

Our Trout, however, was remarkably uninterested. 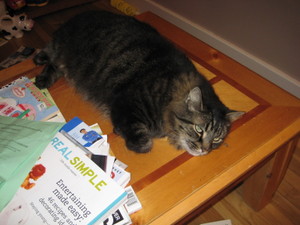 I just can't remember what we did without Google. What did we do?

Before Google we led sad, empty, ill-informed lives. Or course, we also went out into the sun and walked around more. So it's a glass-half-full sort of thing.

I don't know if you live in a place with cave crickets -- but they will always be my mostly terrifying bug ever. Thank God we dont' have them here. I still have nightmares. No bug can compare to that horror.

The mayfly did come close, if only because I'd not seen one before and it almost touched my bare foot. Ew.