Home Archives Profile Subscribe
[deity of your choice] bless the internets: creepy-crawly
Women and body image and food, with cheese

As I am every year on this day, I am stunned by how, through careful application of snacks and time, this: 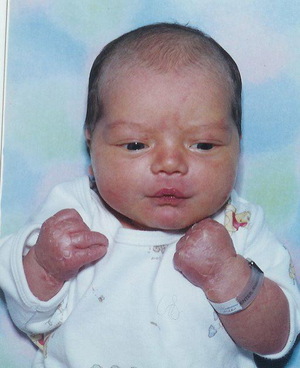 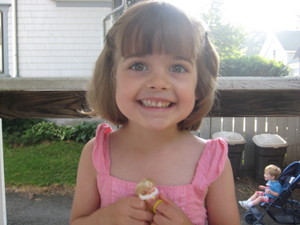 It's been quite a year, this four going into five.  Maddy's no longer the Diva she was. Day by day, she's turning into a bright, articulate school-aged kid who still loves things that are pink and princessy.

This year marked, perhaps, the Diva's biggest life change so far. There are certainly much, much worse diseases to have than Celiac. Still, it's hard to know that your kid will have to deal with having a disease for the rest of her life.

She, of course, has done beautifully with it. Only very, very rarely does the Gluten-free diet get her down. the Featureless Saint and I have more or less adapted. It's gone from something that we think about every minute of the day to something that we just automatically prepare for with little thought. Again, as diseases go, celiac is more of a pain-in-the-ass condition rather than a sturm-und-drang disorder.

Unless, of course, the Diva gets some wheat. Then there is a whole GI explosion to deal with. We shall not, however, dwell upon it.

In the last ten months since the diagnosis, the Diva has gone from a lethargic, grumpy, randomly vomiting and itty-bitty child four-year old to a downright peppy, mostly cheerful, ravenously hungry and tall five-year old. That alone is proof that we're on the right track. Tomorrow we'll get hard data about how much she has grown in the last year. My guess is about 8 inches. 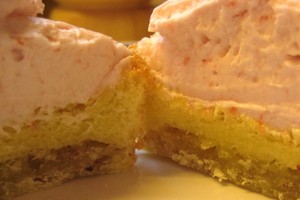 On Saturday, in honor of the Diva's skating rink party, I made GF cupcakes.

Gluten-free baking remains a mystery to me. I've learned a few tricks -- one such is that passover deserts are a good place to start since they are flour-free -- but don't have enough knowledge to venture out too much on my own. There are just too many not-wheat flours to choose from. I don't yet know all of the drawbacks to each. Except for rice flour, which I was already familiar with, if only because I find it unbearably gritty.

This recipe, found in a cupcake book at the Pie Goddess' mom's house, is fairly straightforward. The "flour" is a combo of ground almonds and potato starch flour, which are ground together with some sugar in the food processor. Eggs and more sugar are whipped to death, then the flour is folded in. The resulting cake was tasty as all get out -- I love almonds in almost anything, frankly -- but the texture was off. The flour settled to the bottom of the cupcake, which made an enjoyable marzipan-like wafer.

Of course, I told the adults that ate them that's what I meant to do. Julia Child's lessons weren't lost on me.

With a little tinkering, I'll have it, I think.

The frosting is my favorite buttercream with strawberry jam whizzed in it because the Diva could exclusively eat strawberries if given a chance. Regardless of the texture problems with the cake, the frosting was perfection.

Tonight, there will be no cake. It's way too hot to turn on the oven. We do have a bowl of leftover frosting in the fridge and plan to put a celebratory candle in a dish of ice cream when we do our singing to the girl.

Five years old. Who would have thunk it?

Happy Birthday to Maddy! We're sorry we missed her big day. We'll have to have our own celebration when we get home. Perhaps a trip to Pie in the Sky!
Love,
JJM&C

Happy Birthday to the Diva! Does turning 5 mean that kindergarten is coming up this fall?
p.s. just LOOKING at that frosting recipe made me gain 5 lbs. Yum!

The five pounds is totally worth it. It's the perfect not-to-sweet frosting. The only real trick is to make sure that the egg whites are over 160 -- for me, that means I can just barely keep my finger in for a second -- and there is no gritty sugar left.

And, yup, k-garten. Can barely believe this myself.