ARIES (March 21-April 19)
It may be difficult to figure out how your problems are necessary, but that's what I'm asking you to do. What part does your suffering play in holding your world together? How do your most intractable dilemmas help you avoid reaching goals you're afraid to strive for? In what sense do your crazy-making frustrations entertain you or keep you from being bored? Do you ever find yourself sort of bragging to others about the difficulties you have to endure? Are they essential to the construction of your self-image? Please write out your answers and mail them to yourself.

And, yes, it's been a week. But I won't brag about my endurance. Not now, anyway, now that I've been called on it.

In honor of the last book and the movie and my cold, cold neck, a Hogwarts House scarf. 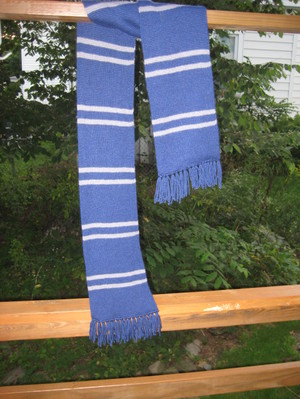 In Ravenclaw colors, natch. Although the colors are more true in the bottom to pixs. 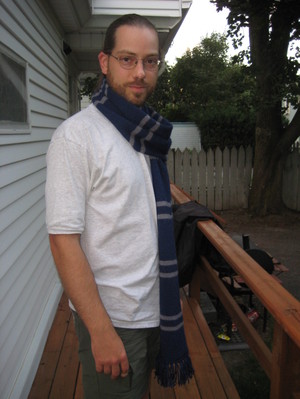 Eight balls of Knit Picks Andean Silk in Navy. Two balls in Slate. Number 8 needles knitted in the round. For this part of the world, this'll just about be warm enough, what with being two layers thick. 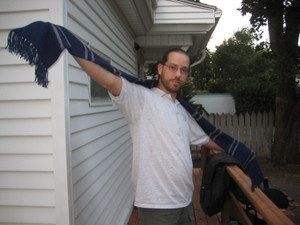 Ten balls -- with about half a ball of slate left over -- gets you a scarf that is more than 6' long, given that my helpful (and Featureless) model is 6'1". The fringe guarantees that I'll always be pulling a cat off of my neck. Woo.

I have also finished a hat for the Diva. Once she consents to model it, there will be pixs.

Speaking of knitting, is it a bad sign that I keep checking Ravelry to see when I'll get to join the club? That just can't be good.

It would be wrong to steal the computers of 3308 people, yes?

* Sheri at the Loopy Ewe reminds me why the fall is the most wonderful time of year: Pumpkin Spice Lattes. Sadly, oh so sadly, the nearest *bucks is an hour away. Woe.

* Also sadly -- the nearest Wegman's is an hour away, too. But I do have the We Love Wegman's blog to keep me company.

* Creepiest kid's show ever.  The Diva, however, loves it.  Kids are weird.

* Lastly, in case you ever need it, Iain M. Banks has a list of all of the Culture ships up on his My Space page.  Ain't the internet grand?

SUCO classes start on Wednesday, which I suddenly realized is, like, tomorrow. Feh.

Even if the Featureless Saint and I weren't gainfully employed by the college in question, I would know classes were about to start because Oneonta is crawling with students who moved in over the weekend and, more importantly, have NOTHING to do until classes start. Last night was a great one for Undergraduate Street Theater (which would be more enjoyable if it started at a decent hour) and I suspect tonight will bring more of the same since the weather is supposed to be gorgeous. At least bongo boy hasn't returned. It's the small favors.

Still, it's nutty when their hands are idle and filled with beer. 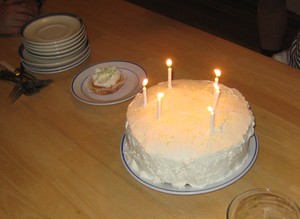 'tis also birthday season. Last week, it was Grandma Char's. There was cake. The cupcake is gluten free. And it seems that I've perfected my buttercream.

Today is Adam "violently executed" Lipscomb's birthday. Go wish him a happy one. And, yes, he is now officially old. Well, older than me.

I included this picture not because it is a good one of the adults -- but because this more of less captures the Dude's response to fire. We are doomed. 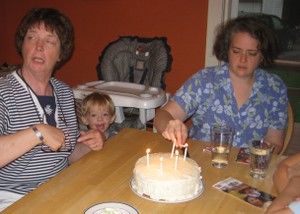 Because the Featureless Saint and I are the sort of folk who do such kooky things, we took a quick trip to Ithaca to visit Eisha, from 7-Imp, and her honey B, both of whom we knew in Knoxville.

Ithaca is one of my favorite cities. I wouldn't want to live there -- it just doesn't feel like a *real* place somehow -- but it is awesome to visit, if only for a few hours. I feel the same way about Asheville, NC. Great place; not real.

If anyone can explain the meaning behind this concrete block I'd be much obliged. It's on the sidewalk near the Chanticleer: 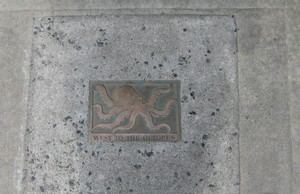 B also pondering the Octopus: 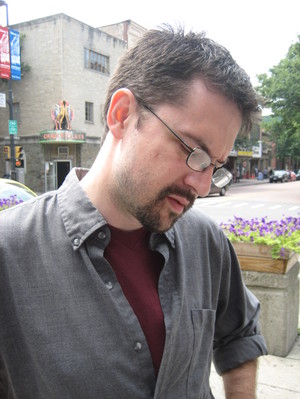 And, of course, the Featureless Saint, E-dawg and me (in mirror): 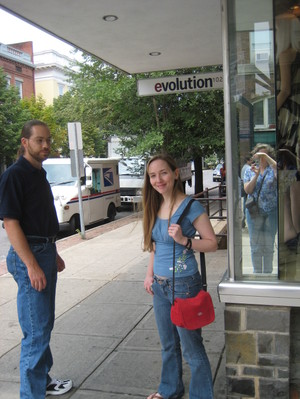 You are The Moon

The Moon is a card of magic and mystery - when prominent you know that nothing is as it seems, particularly when it concerns relationships. All logic is thrown out the window.

The Moon is all about visions and illusions, madness, genius and poetry. This is a card that has to do with sleep, and so with both dreams and nightmares. It is a scary card in that it warns that there might be hidden enemies, tricks and falsehoods. But it should also be remembered that this is a card of great creativity, of powerful magic, primal feelings and intuition. You may be going through a time of emotional and mental trial; if you have any past mental problems, you must be vigilant in taking your medication but avoid drugs or alcohol, as abuse of either will cause them irreparable damage. This time however, can also result in great creativity, psychic powers, visions and insight. You can and should trust your intuition.

What Tarot Card are You?
Take the Test to Find Out.

qotd, hey look over there! edition

"The CIA was editing Wikipedia; one CIA entry concerned lyrics in a song from the television show "Buffy the Vampire Slayer." A CIA spokesperson responding to queries about the edits stated, "I cannot confirm that the traffic you cite came from agency computers. I'd like in any case to underscore a far larger and more significant point that no one should doubt or forget: The CIA has a vital mission in protecting the United States, and the focus of this agency is there, on that decisive work."

Unrelated - yesterday was the Diva's last day at the preschool where she has been for the last 3.8 years. I didn't expect either of us to cry as much as we did. It was pretty clear when I showed up for the "blast of to kindergarten" festivities that she'd had a weepy day. Truth be told, her weepy day started the night before, when she woke up at 3 a.m. in tears because she didn't want to leave Bugbee.

And, yesterday, when she started, I started, too. Then her teachers -- who are wonderful -- read some poems and sang some songs. Maddy and I went into the hall to weep like infants, especially when we started to flip through her binder of 3.8 years of stories and pictures. Lordy. I'm welling up just thinking about it.

I can see where she gets her fear of transitions, you know? Who knew it would be this hard?

She's still psyched about kindergarten, by the way. Just doesn't want to leave the old place. I can completely understand -- even though I keep pointing out that we'll be back, if only to pick up the brother-man. Because, tempting as it might be some days, we can't just leave him there.

I like cross stitch. I do. I took it up mostly to give my thumb and wrists a break from all of the typing and knitting but I am starting to enjoy cross stitch qua cross stitch. 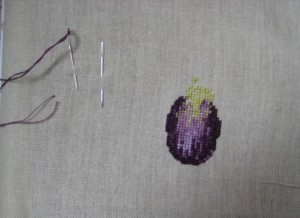 It has taken me an obscenely long time to get this much done. I keep having to stop because I get this deep, uncontrollable urge to throw it very hard across the room. Then to jump up and down on it.

Is there a trick to this? Or am I just not cut out for keeping track of all of these little pieces of thread?

Regardless, it's about to be banished to the closet of shame, where it can sit and have a good think about what it has done while I move on to something that might be more fulfilling, like teaching the cats to heel.

A word (or four) about living with two worthless cats who like to eat plants:  the only answer is to get creative and put plants where said freeloaders can't get to them.

(I once thought that the answer was "cacti." On a cat-related level, it was a good answer. On a me-with-plants level, it was a failure. It turns out that my brain frequently confuses "low maintenance" with "no maintenance." Cactuses do need to be watered occasionally or they will collapse in on themselves, like a marshmallow that you've heated in a microwave then cooled. Ask me how I know this.)

I decided that the space under the cabinets above the kitchen sink would be a perfect place for plants. 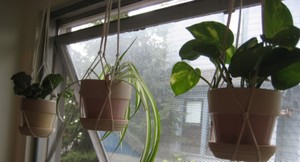 Nothing is ever easy, of course. Armed with little more than a vague memory of macrame-ing keychains as a kid, a ball of cotton string and a book about the craft from 1968 that I borrowed from the library, I tied some knots. 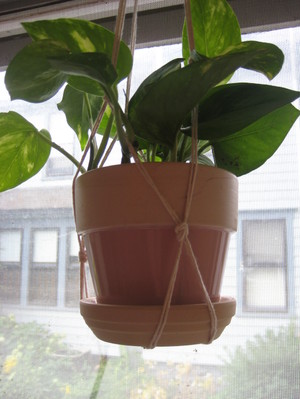 No, they aren't perfect -- but they have a lovely whimsy that I like. 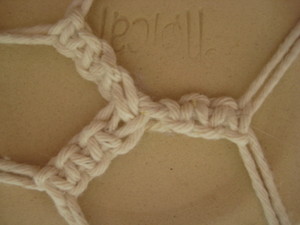 If you look at the first picture again, I'd like to point out that I intended to put the yellow pot in the middle, so that there would be some adherence to symmetry. Mooch, the rat-bastard, decided that the spider plant couldn't be on one of the far sides, because those fronds were just too tempting. Now he has to stand in the sink to get to them, which slows him down enough for me to catch him.

Because I can't leave well-enough alone, I also made a magnetic wall under another set of cabinets. * 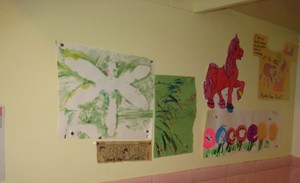 This took about 20 layers of magnetic primer** and two of the latex paint. 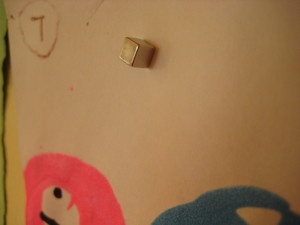 Even with the 20 coats, the magnetic pull isn't that great. I wouldn't fear for your facial piercings, is what I'm saying. Rare earth magnets work about the best -- and are just cool as hell to play with.

* I know these pictures are dark. I was waiting for a nice sunny day to take them -- but that may not be until next summer. The weather, she has turned.

The kitchen project has entered its last phase. The easy phase, given that the tedious priming, wallpaper stripping, re-priming, painting, taking off cabinet fronts and drawers, painting and touch up have now been accomplished. My last project was to get decades-old vinyl floor clean.

Let me cut to the chase -- five hours, four of those magic eraser thingies, several buckets of clean water, a big sponge and my aching knees and wrists. I also appear to have sanded my fingerprints off.

Still, it's done. My grandmother still would think it's filthy -- but if it's any indication of how bad it was, the Featureless Saint saw it half-cleaned and made some crack about how it might save more time to redirty the clean parts rather than make the filthy parts clean. He had a point.

1) Is it news really that gifted kids are being left behind in our government's misguided quest to accommodate every child? And is anyone else thinking of that Vonnegut short story? Maybe all of those lead toys are a way to level the playing field.

2) Must make Fried Coke. Might be even better with root beer, no? Why am I not surprised that this originated in Texas? I know -- deep fried Shiner!