Cute kid story. Skip at will.

The Boy talks now. We've reached the stage where we understand him about half of the time and spend the other half of the time throwing words at him in futile attempts to figure out what he means. But there is one word that keeps coming up. It's halfway between "rabbit" and "ribbit." Whatever it is, it is something he is adamant about. The Saint and I haven't nailed down what the Boy means, but we do know who he reminds us of....

"If someone calls me up and says her toaster is talking to her, I don't refer her to professional help. I say, 'Put the toaster on the phone.'"

-- Sal Ivone, Weekly World News editor, as quoted in Tim Harrower's Inside Reporting, which is my favorite journalism text ever.

Plus, if you've ever wanted a look deep inside my writing brain, hop over to Elizabeth Merrick's Secret Agent column at Bookslut.

The deadline ducks are quacking at my heels. So, two things:

1) Women are less happy than they once were, according to new studies as reported by David Leonhardt in the NYT. Sample quote:

Ms. Stevenson was recently having drinks with a business school graduate who came up with a nice way of summarizing the problem. Her mother’s goals in life, the student said, were to have a beautiful garden, a well-kept house and well-adjusted children who did well in school. “I sort of want all those things, too,” the student said, as Ms. Stevenson recalled, “but I also want to have a great career and have an impact on the broader world.”

The piece is interesting in its own right but really begs the question -- should women go back to having smaller (in terms of number, not importance) expectations? Is that the path to happiness?

2) I can never get through an entire issue of Vanity Fair or Harpers or the New Yorker before the next one arrives, which is why I don't subscribe because the guilt that all of those piled-up unread issues induces. Still, it's nice to see that VF is putting the good stuff online, like this piece on Stephen Colbert. The Colbert Report isn't a fave of mine, but I've always found the guy himself oddly fascinating.

* My kitchen, which I spent the summer stripping and painting and scrubbing, is slowly coming together. The best part is that I finally got to  hang this poster: 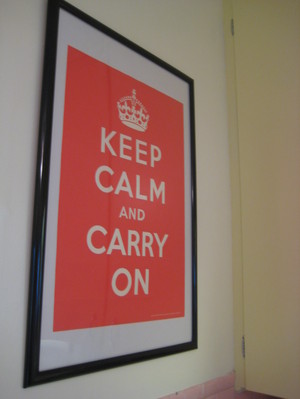 Words to live by.

* The past few days have been blastedly hot here. Today is hot (90 on my back porch) and muggy. It is wrong for late September. I am against it, for the record. Which is why this piece that I wrote about leaf peepers just ran, because the weather gods hate newspaper editors.

* For those in the area, the Cauliflower Festival is this weekend. I am oddly excited.

* And because there has been one for a while and the union will revoke my blog card if I don't do this on a monthly basis, a picture of Mooch and the Jingle Bug, which is the best baby toy ever. 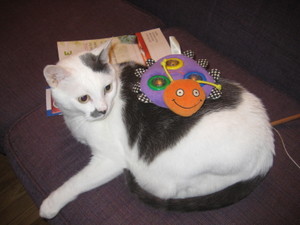 in need of advice

Because this is *exactly* the sort of event that I find exciting beyond belief, I'll be making a pilgrimage to the Sheep and Wool Festival in Rhinebeck, New York. I know that at least the Pie Goddess will be coming with me. There's still room in the van, tho, if you have a yen to come.

But this isn't about that. What it is about is advice. Even though I've been to the 'beck once before and I live a mere 2-ish hours away, I know little about what's cool to see in the Hudson Valley. Which restaurants are worth a trip? Any neat places to stay (and, yes, I figure the ship has sailed on this and that there aren't any rooms anywhere anymore but I'll store the info away for next year.)?

My goal is to finish the Nantucket by then. It's good to have goals.

Oneonta, which is the small town in New York where I live, is also known as the "City of the Hills." Given that we're on the western edge of the Catskills, this is an apt description.

To give you, dear reader, a sense of how I maintain my girlish figure (heh!), my walk to my Hartwick office. With pictures.

My car -- a '98 Saturn -- is on the other side of the giant Cadillac Escalade. Yes, the Caddy has Faculty stickers. Yes, teaching must be quite lucrative for someone. Not me, mind, but someone. 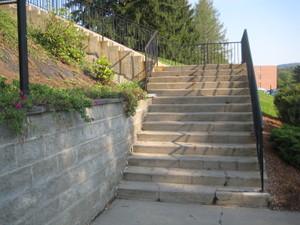 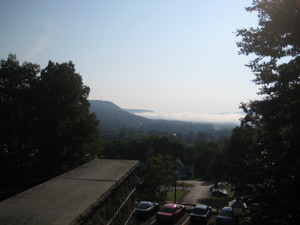 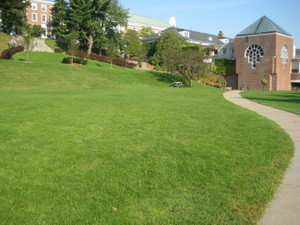 In the upper center of this shot, you'll see a very small white tower. My office is under it. Dead ahead is the student union. 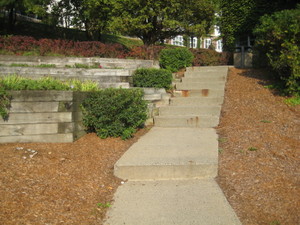 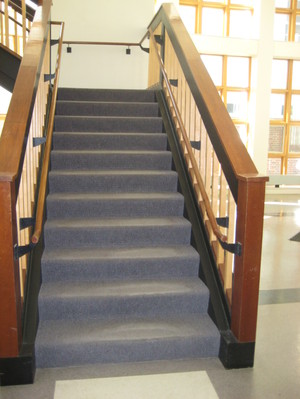 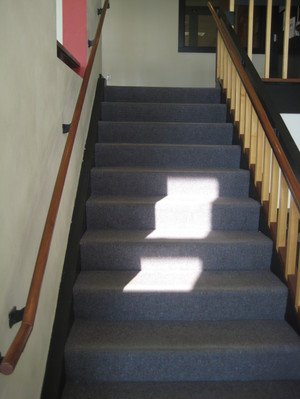 When I stopped to take this picture, I could hear the woman who had been just behind me for most of the climb wheezing. 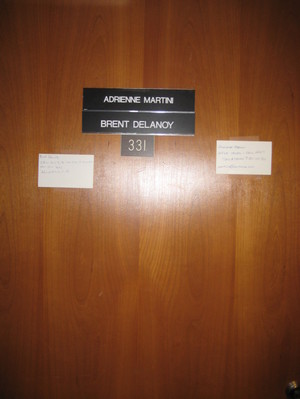 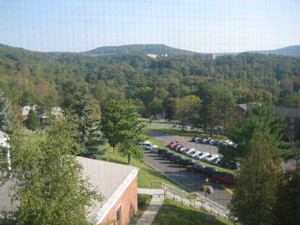 Again, at least it's scenic. That white building off in the middle distance is part of the SUNY-Oneonta campus. Thankfully, I don't have to walk there.

his coat is nice and shiny

Cute kid story. Skip at will.

One of the Dude's* favorite things to do is to sneak into the kitchen to eat cat food. Fortunately, the cats eat dry kibble so the Boy gets a crunchy treat rather than one that is more like pate.

This morning, Scott saw him walking out of the kitchen with something in his fist. He was also chewing on something.

"Are you eating cat food?" Scott asked, knowing full well what the answer was.

And so the Boy has developed both the ability to lie and to use his imagination. We are doomed.

* Just to give you a complete picture of his Gooberness, he's currently walking around** the living room with a paper towel draped over his head as if it were a very white and very floppy beret.

** His sister spent the better part of the evening wearing only one shoe and one sock. Why? No idea. But it gave her a very silly walk.

"I'm not afraid to write anything anymore. A lot of that has to do with the big picture - having a child and realizing that life's too short to be afraid of a fucking piano ballad."

-- Head Foo Dave Grohl on how being a dad has changed him.

"People used to complain that selling a president was like selling a bar of soap. But when you buy soap, at least you get the soap. In this campaign you just get two guys telling you that they really value cleanliness."
-- David Brooks, NYT promo flyer thing.

One day I will have sufficient grace and maturity to not post when I am irritated or otherwise grouchy. I would not suggest that one holds one's breath until that day arrives, if only because one would be very, very blue if not otherwise dead.

After a decent night's sleep, the realization that it is silly to consider my book career over at the ripe age of 36, and an episode of America's Next Top Model -- I'm pulling for Heather -- my sense of perspective is as intact as it ever is. I've decided to take it as a good sign that I've sold one-third of the print run as of March 2007.  A book about depression is a hard sell, no matter how much you stress that it's only sort of about depression and is, in fact, kinda of uplifting by the end.

Instead of focusing about how less-than-stellar sales make selling book number two exponentially more difficult, I'm going to spend that energy on making the proposal better, which is the nut of what my agent said. It still flips me out that I even *have* an agent, so I must be doing OK.

What also kicked my whiney ass was this bit from a Galley cat piece about Kimberlee Auerbach and Tarot cards:

"I'm usually such a verbal person," she explains, recalling one of the first cards that connected with her: a picture of a woman in a birdcage, throwing herself angrily against the bars, and failing to notice the unlocked door behind her. "It was great to be able to learn more about myself through images."

Which isn't to say that I've given up on promoting as I can -- and, yes, Mrs. G, it would be awesome if your book group picked up the title and if everyone whose read Gothic passed it on to another person -- but I'm going to stop beating against the cage of sales being the same as success. For now, anyway. I'm sure this will change.

For thems that care, quotes of the week are coming this afternoon.

Also, for thems that are going to Rhinebeck, anyone want to go to lunch/dinner at Blue Hill at Stone Barns? It's not that far from the fairgrounds...

No, I didn't disappear into a Ravelry hole. Our cable is out, which means no internet and no phone. Even now, it's a little sketchy, so we'll see if I get to post this. If you're reading this now, I guess I did.

I did have something else planned -- I took pictures and everything -- but can't upload them now because of the aforementioned situation. And, so, um, well.

In the writing whingery department, I just got off of the phone with my agent and received my bi-monthly statement on book sales. To make a long story short, it looks like no one is knocking down my door to buy book number two and the sales on book number one, once adjusted for return, suck like a mighty thing that sucketh.

I'm trying to not let it get me down. I keep reminding myself of all of the good things in my life. They are many. I've got a very good life. I am not my amazon ranking. Lather, rinse, sob.

Rather than dwell on that, I've decided to dwell on my absolute hatred for the One-Legged King Pigeon Pose, which I had to attempt yesterday for the first time in a long time. I'm usually good about keeping my eyes on my own mat. Given how I could only attain the very first little bit of the above pose and had to go back to something less taxing, I had some time to look around the room, at everyone else's grand pouty-breasted pigeons. Mine looked more like a grackle. With gout. And the mange. My Warrior's getting fierce, tho. So there's that.