This is how Mooch spent most of Friday night: 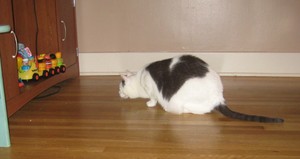 Shortly after the Featureless Saint and I finished watching Dr. Who*, I looked over to notice that both cats were intently staring under the bookshelf. Near as I could tell, there was no reason to do this. The bookshelf has moved by itself for a good long time and does not need minding.

My best guess was that Mooch was just messing with us, which he does. Trout, being a simple creature, fell into his trap as well. Still, I stared with them for a good five minutes, just to make sure -- and nearly jumped clean out of my skin when a little mousie snout poked out at us.**

Scott, because he seems to love this sort of thing, went hunting for a flashlight and  pointed stick, which is what one needs to deal with a mouse 'round these parts. The only flashlight that currently works is the kids' cow flashlight. It's shaped like a cow, appropriately enough, and moos every time you turn the light on. 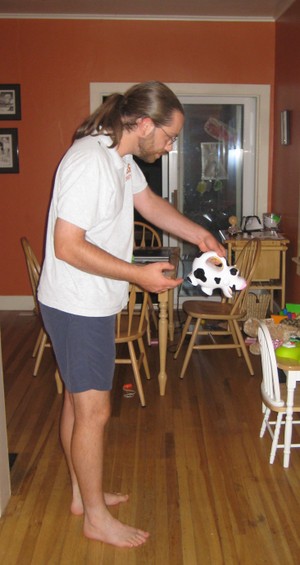 You'd think that there are plenty of pointed sticks in a knitter's house. You'd be right. But a) they aren't long enough and b) I don't want mouse innards on them. While we were hunting about -- a paint roller extension pole thingy was deemed a good mouse herding device -- the mouse in question skittered from under the bookshelf to under the tv, pictured above. The cats acted like teenagers at a Beatles concert. And were too excited to do much good.

Scott secured a path for the mousie to get from his hiding place and out the dining room door. My job was to keep Mooch from killing it while it ran.***  I armed myself with a broom.

Scott shoved the entertainment center out of the way. We waited for the mouse. No mouse.

We shoved it more. Looked around with the cow.  No mouse.

We looked for holes that the mouse could have escaped through. No mouse.

Since I already had the broom in my hand, I swept behind the entertainment center, where I found enormous dust balls that looked like mice and missing puzzle pieces and a rice cracker. No actual mouse.

We gave up. Mooch was convinced the mouse was still under there, despite all evidence to the contrary.

Just as Scott was coming up to bed, the mouse darted out from under the tv, where some kind of wacky space/time portal must be hidden, and darted into a coat closet, where he still may be.

Mooch, however, spent the rest of the night staring under the entertainment center. Remind me again how cats ever survived in the wild?

* This first few episodes of this season left me meh. The Edwardian-era teacher one picks up quite nicely, however.

** I would have though that the local mice had learned a Very Important Lesson after the last incident. I was wrong.

*** We didn't want to chuck Mooch outside because he would simply stake out the door and jump on the mouse as soon as he could. We couldn't chuck him upstairs and shut the door because the kids were sound asleep and he would wake one of them up just out of spite. Trout, however, did what he does in times of stress, which is hide in the basement.

I've had cats that wouldn't even bother getting up to look at it. Good thing they're cute.

LOLMPLAMF. (Laughing out loud making passers-by look at me funny.)

>> Trout, being a simple creature, fell into his trap as well.

They haven't done this in a while, but as kittens Electra used to do the starring at nothing thing and then, just as Meeko got interested, she'd go take a nap. Being downright stupid (but so very cute), Meeko would continue to look at the nothing. And it really was nothing. I'm convinced E got M to look at nothing because she's wiley like that and he's really that stupid.

Wow. I'm really verbose in the comments today. I think the meds I started taking last week are making me a bit manic. I kind of like it.

Is anyone else seeing the date today and having a "whoa, 9/11" moment?

Christmas eve one year, while I was in the midst of wrapping gifts, one of my gerbils decided to make a break for it. Much hilarity and frustration ensued. Mostly frustration. Somehow, the creature made its way into the lining on the bottom of the couch. We ended up flipping the couch over and trying to lure the little guy out with cheese. Seriously, it took a good 3 hours to catch him.

As the nights begin to cool, we call this time of year "Mouse Season." Despite the best efforts of Great Stuff and our Ehrlich pest guy, we still wind up with mice in our house every fall. It doesn't help that our cat brings them in for us to "help" with. Our entertainment center is a monstrosity that I designed and my dad built (out of solid oak), and mice instinctively know it for the Rock of Gibraltar that it is. And through the open vent behind it (through which all our many techie-geek* cables and cords run to our computer room). And, thus ... mice in the walls. And another call to the Ehrlich guy.

*We love Doctor Who, too. I download them as soon as they broadcast on the BBC. Waiting for series four, eagerly. Have you tried Torchwood, as well?

I spent 9/11 sitting in the Boston world trade center at a tradeshow. It felt odd.

Luckily for us, the crack team of two cat-like dogs (chows) and one faintly dog-like cat (part Maine Coon) are excellent mice exterminators. When they stare fixedly at a wall or pile of books, I start keeping an eye out for mouse corpses.

I am glad I'm not the only one with useless pets.

So far, I love Torchwood, if one can profess one's love based on just one episode. I like the idea of downloading Dr. Who from the BBC but that requires far more intellectual gumption than I have on any given day. Besides, I like the Sci-Fi Channel promos.

I had my 9/11 moment when I got on campus and the bells started tolling to mark when each plane hit the towers. I'd forgotten until that very moment.

I'll send Edison via UPS. For a tiny little tuxedo cat, he is an ace mouser. Unfortunately he likes to sneak down into the basement to hunt,then race back upstairs just as I'm sitting bleary-eyed with my first cup of coffee,and deposit a half-alive mouse at my feet.