Opportunity is missed by most people because it is dressed in overalls and looks like work.

Stolen from Kathryn of Threads of Desire., who adds some good, Tim-type advice about getting stuff done. Which is what I have to do now.

you had to know this was coming

I still can't look at picture of Mooch without welling up a bit. Stupid cat.

Some will remember this picture from the vet's office, snapped during one of my many visits with Mooch: 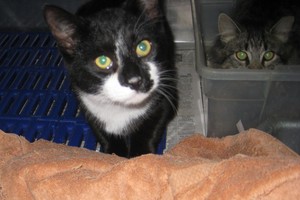 Some will notice a striking similarity with that cat and this one, who I found sitting just outside my bedroom door: 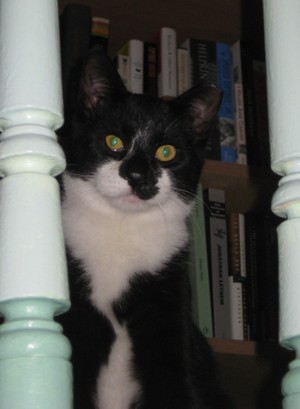 This one -- who we are calling Barnacle because a) he was found in a barn and b) likes to cling to the undersides of things --  is four months old and has brought out the kitten in Trout, who seems to be adapting with aplomb. No real hissing. No real territory disputes. I think Mooch had already taken the fight out of Trout. Plus, it's Trout's true nature to be fairly placid.

For the first 24 hours of Barnacle's residence, I figured I'd made a huuuuuuge mistake because he refused to come out of the basement. In fact, we almost named him Crawlspace because that is where we figured he'd always be. Now, however, he's developed a knack for being underfoot and sleeps with Scott and I, so I think he's settling in. The kids still freak him out -- but they still freak me out sometimes, so I can't really blame him.

Barney, as we tend to call him because it looks like he's already suited-up, is no replacement for Mooch, thank god. I worried that it was too soon but realized that the house just doesn't feel right without two cats in it. And Barney just kept squeaking at me whenever I came to pet Mooch, which felt like some sort of sign.

So we have another cat. He's fitting in. I miss Mooch, still. We move on. 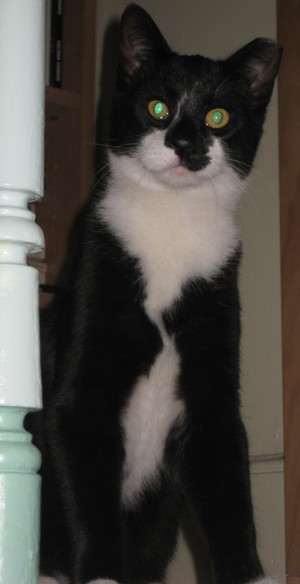 all hands on the bad one

Having some problems with coherency today. So, a list. Of stuff. In no order.

* From Slate: Women get no respect, even when they do a great job. In other news, water still wet.

* Katha Pollitt, whose the literary and parenting voice that I didn't know I needed to hear until this morning, is interviewed by Ada Calhoun at Babble. (Hat tip to Katie.)

* ETA: Hillari Dowdle, who I knew in Knoxville appreciates her body, despite it not being perfect. She's on to something. And I didn't know Coury, my former boss, could be so wise.

* Not a sheep but I still love these lamps.

* City Mama lists some do-it-at-home mass produced holiday food gifts. This year, I think I'll be whipping up some of Alton Brown's Free Range Fruitcakes. I do need to start soon, tho, since they cure for a couple of weeks. Just need to figure out where to stash them so that kids or pets or mice don't find them. Hrm.

* Redneck Mother on weaning: "He was well past breastfeeding for sustenance, and the day he started blowing raspberries while nursing was the day I decided that his emotional needs were secondary to my personal dignity." I actually LOLd.

* Christopher Hitchens gets a Brazilian wax -- and gives folks a feel. Ah, to be a member (heh) of the NYC literary scene...

Some yarn-related items cluttering up the place. 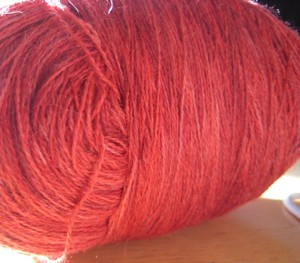 Speaking of, the Christmas knitting consists mostly of square washcloths**: 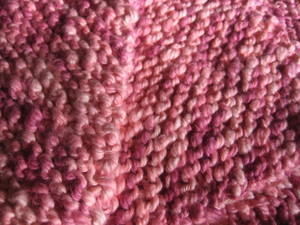 When packaged with cool soap, these make great teacher gifts.

Given the confluence of a crappy cat week, impending finals (and holidays) and living with two kids, I can't free up enough brain space to start anything complex. So, more squares. These are for Miss Kay's Oliver blanket. 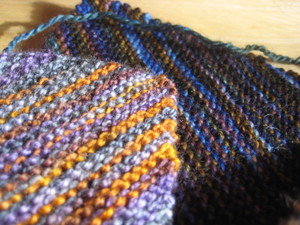 Currently, I have six to send, which I'll do this afternoon after I pick up the Diva. One of the six might be having some problems meeting the four-inch requirement but I'll send it along regardless. I won't, however, send along the two that are barely three inches per side, which happened because I forgot how geometry works. Um, twice.

And now for the lusting after the fibery pursuits of others:

My new moral imperative is to knit a Nisse! According to Theresa's response to my comment about how much I love her troll, the Alan Dart pattern might be available. Or not. Still, I might try winging it.

I covet Clara's new office space. I can only begin to describe how much I covet it. I have started eyeballing the barn in our backyard but am too much of a realist to glean much hope.

* Because I have no swift, I drafted my father to act as one over the long weekend. He, like all those I convince to perform swift-like duties, wondered why my husband started laughing when my dad agreed to sit there with his arms out. And as much as I love the alpaca and the lace-weight yarn, it is a bitch and a half to wind into something ball like. My dad required beer and victuals afterward.

** For those that care, the yarn is the delightfully squishy Patagonia Nature Cotton. I also am doing some in green.

Mooch's marker and a question

Thanks to a tip from Lisa H., we found the perfect marker for Mooch. Plus, it was on sale. 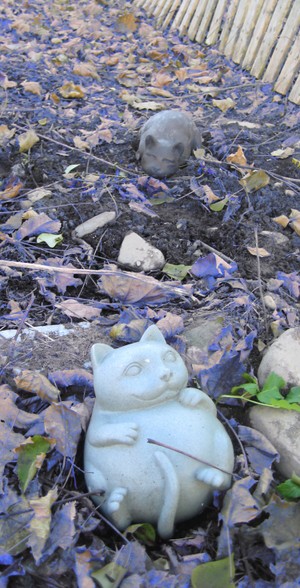 Sabian's marker is in the foreground; Mooch's is in the back about to pounce. It fits more than you can imagine.

The lighting effect is courtesy my camera and all of its many magical settings. Seemed appropriate for a burial site.

The Mooch is dead. Long live the Mooch!

And, now, a completely unrelated question - does anyone know of any good games for a 5-year old? Board games or card games would be preferred. Please save me from another round of Candyland. Please.

And, now, an unrelated, self-promotional link: my feature on local toy trends in the almost-daily.

You're Jordan Cochran, the adorable fast-talking GIRL scientist of all things. While she may not be up there with the other super-geniuses of the '80s, her awesome mechanical aptitude and geek-girl cuteness have made her the sweetheart of nerds for over 20 years.

"I never sleep, I don't know why. I had a roommate and I drove her nuts, I mean really nuts, they had to take her away in an ambulance and everything. But she's okay now, but she had to transfer to an easier school, but I don't know if that had anything to do with being my fault. But listen, if you ever need to talk or you need help studying just let me know, 'cause I'm just a couple doors down from you guys and I never sleep, okay?"

"Gratitude is the antidote. It is useful in combatting a variety of diseases, from something as vague as the discontents of civilization to something as specific as personal grief. Thanksgiving is the holiday of gratitude, and I am always willing to celebrate it."

"The most damaging and persistent delusion we’ve acquired about sleep is that the vital human function is optional. As one psychologist puts it, “You don’t have people walking around figuring out how to get by on less air.”"

From the NYT magazine's cover story on sleep by Jon Mooallem*

FWIW -- as a result of our agreeing to be on DIY's To The Rescue, we were given a new Sleep Number bed. It's a perfectly acceptable bed. Can't say it changed my life but it is just fine.  The only problem is that no one ever tells you how you know when you've found your perfect sleep number. Over the last few years, I have probably changed it four dozen times. When I finally hit it, I expect a choir of angels singing hosannas.

* thanks to Doula K for pointing it out.

Sorry about the quiet. The past two days have been a whirlwind of activity. In the best way. Except for the cleaning. That was just tedious.

And, now, stuffed silly and about to put the pumpkin pie in the over to reheat. Prosecco will be opened. How can that be bad?

In short - I am thankful for the luxury of a feast and two nifty (if occasionally irritating) children and family and a nice, toasty house full of the above.

Pictures of something anon. But now there is pie.

And, lo, I finished the Nantucket. There was rejoicing. 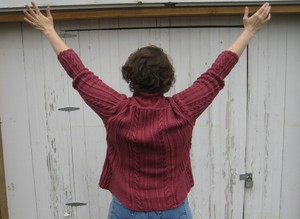 Yes, it is gloomy here today -- but if you wait for a sunny day in the middle of November...well...you haven't lived here long. 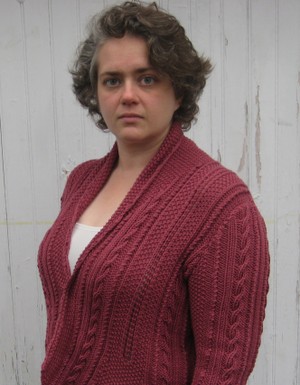 My stand still shot. Note the lack of buttons. In the shot, I held it together with a paper clip. Given that I infrequently button cardigan sweater because I'm usually wearing them over something else, I don't plan to put actual buttons on this. Especially now that I see how round it makes me look when closed, even when closed with a paper clip. 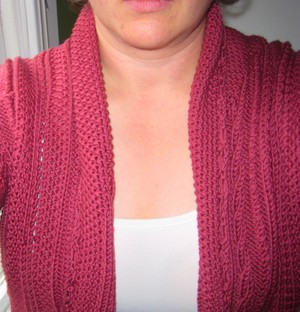 Besides, it hangs better when not closed and the collar doesn't do that weird thing that it does in the above shot. 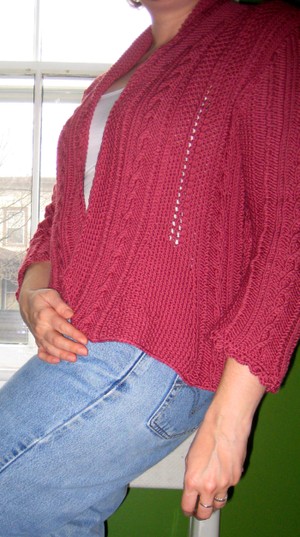 One thing that bugs me is that I managed to get the crochet around the collar pulled waaaaay too tightly, which makes the front do something wacky. Right now, I lack the will to pick it out and take another pass.

While I like the way this turned out, for the most part, and it represented a huge step in my knitting skillz, I'm a little meh about it. We shall see how I feel about it after I wear it for a day, rather than just chuck it on to take some pictures. Besides, I usually feel kinda meh about finished objects. It's one of my many quirks.

Would I knit it again? Sure. But not right now. There are too many other projects that have caught my wandering eye...

Plus, there's all of this Christmas knitting that the elves aren't doing. Stupid elves.