I can only begin to tell you how tickled I am by this: 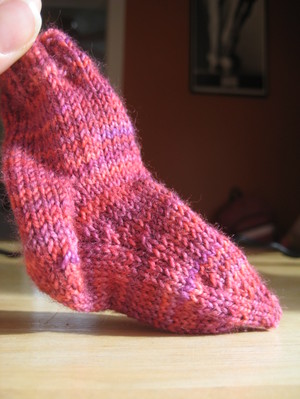 Yes, it is just a wee red sock. To give you a sense of how wee, that flesh colored blob is my thumb.

To answer some questions I know you have -- No, I don't plan to knit another one. No, I don't know what I'm going to do with it but I'm thinking Christmas ornament. No, there is nothing noteworthy about the construction or the yarn. No, I can't tell you what the yarn is because I don't know myself.

Still, I am tickled because it isn't something I'd ever choose to knit but did because it was a gift for placing an order at The Loopy Ewe, whose goods I'm using for a swap. The wee sock kit was so cunningly packaged that I couldn't resist  casting on, despite the fact that I'm not even that wild about red. It was a brainless two evening project whose results I couldn't be more satisfied with.

I know. This is probably a sign of some kind of mental decline but, still, I am tickled. It is, as the Quakers* say, a gift to be simple.

* This might have been the Amish. Or the Shakers. Or Ben Franklin, who was a Quaker (or Shaker). I get 'em all confused.

Which Buffy the Vampire Slayer Character Are You?

Here's the odd bit - I've taken this quiz a couple of times (I feel I'm more a Giles than a Willow) but keep getting the same answer. And, yes, I *really* should be doing something else.

Quiz stolen from Gwenda B.

Oh, and -- ACL will be showing their Hardly Strictly Bluegrass episode this Saturday. One of the clips on the site is Gillian Welch singing Miss Ohio. Love. Oh, and Dad, if you've read this far, set your DVR because it also features Emmylou Harris.

And -- for the Italians to whom I am related and others who like really good soup, this seems like it might be close to my Grandmother's pasta "fazool." I might whip up a batch this weekend.

But if you haven't seen it, you can't judge. When I first read about it, I thought it was the worst piece of crap tv to come down the pike, the last desperate scramblings of a writer-free world. I was completely wrong.

Given that it is hosted by Dr. Drew, who is among the smartest and most compassionate "celebrity docs" out there, I should have given it the benefit of doubt. Dr. Drew has always been the anti-Dr. Phil. Dr. Drew is not in it for the bombast or the moral judgments or the fame.

Still -- I know. Celebrities in rehab. But it's not that. It is real rehab, with the puke and the searches and the turmoil. I have a little bit of experience with locked wards -- and this series brings out all of the worst and the best of what happens in one.

Is it exploitive? Yes. And no. You just have to see it first. I can almost promise that your first thought will be similar to this one. Then you'll get it.

From an interview with Dr. Drew, who I want to, I don't know, adopt me or write with me or have a cup of coffee with me:

"Drug addicts are funny. Out of the most poignant moments comes great comedy. We use comedy and laughter to deal with these intense experiences, and that goes for our staff and our patients. To make light of or to belittle these people’s experiences, that concerns me. However, to laugh at them comes from a deeply connected place. People are funny. People are funny even in the most intense circumstances."

"It is treatment. It is the human experience. It doesn’t pull any punches."

And that is why I can't stop watching it.

don't get any ideas

CadaverForSale.com - How much is your cadaver worth?

Unrelated: I have a sudden compulsion to make a Queen Elizabeth cake. Or maybe the flaming pilgrim. I'll wait until Maddy's old enough to get it, though. Link stolen from Ellen Kushner.

Also unrelated: I must get this fabric, yards and yards of it, but where? Anyone?

I thought I'd actually shaken off week-before-last's mystery illness. I even gave my immune system a little pat on the back for being so brave and so strong. As it turns out, the dread illness had merely gone into hiding, where it festered and bred. Now my entire head is the scorched battlefield, where only the brave or evil dare tread.  The doc said so, in not so many words. Woo! My first Z-pack of the new year.

Let's write together. I'll start the poem. You tell me the next line:

"The key to a happy marriage is speaking the same language. My husband and I both speak sarcasm fluently."

Also -- a Scrabble match I wish I'd gotten in on, even though I hate Scrabble with a dark, deep passion. John Hodgman! John Oliver! Sarah Vowell!

Look! I finished something!

The Rippling River scarf is done. 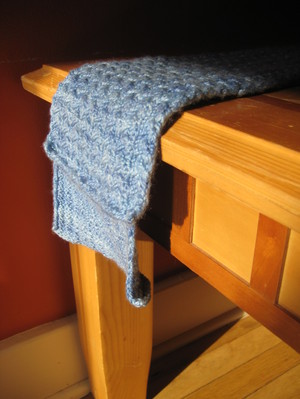 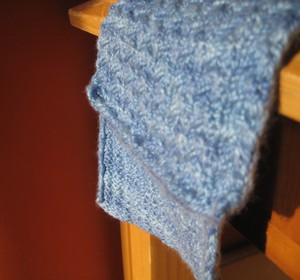 Details: one skein Maple Creek Farm 50/50 in sapphire. Shifting Sands pattern from Grumperina. In an ideal world, I would have bought two skeins for  a truly enveloping scarf. As it stands, it works -- but more would be better.

In other knitting news, the beloved gray sweater project has another swatch, which looks enough like the first swatch that I won't even bother showing it to you. The size 1 needles were the winners. Now I just need to save up my penny for a gazillion balls of Peruvian Baby Cashmere. I should also budget in a seeing eye dog for the day that this project with dark gray yarn on wee needles makes me go blind.

In other crafty news, the Featureless Saint rocks. My late Christmas gift is now in the house. 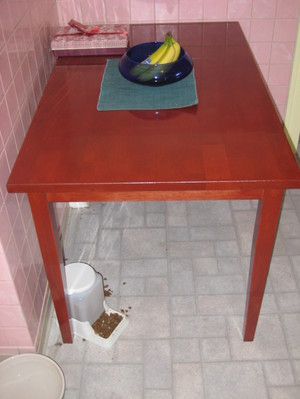 A new kitchen table, purchased unfinished. The Hub did a lovely job, eh? Eventually I'll whip up a runner and a less blue bowl. And, yes, I'm aware that it doesn't really go with the pink walls and gray floor but someday (someday!) we will live in a house that doesn't have a pink kitchen. Alternatively, someday I will lose my mind and rip the pink plastic tiles off of the wall.

A little story about why it is truly amazing that I can get anything done:

The Featureless Saint and I have been netflixing*  Bones. While the murders and mysteries that surround them are meh, the character development of the ensemble and between Boreanaz and Deschanel is more than worth the price of admission. Besides, it's not like there is a lot of other stuff on.

Last night we watched the one with the Skull in the Desert. It's nice that Angela is finally getting some decent backstory as is Zack -- but that's not the important part, w/r/t this post. No, the important part is one of the songs. Their music supervisor is a genius, if only because we seem to like the same things. Everyone who shares my taste is a genius.

One of the songs that was used was one that I have loved, loved, loved since the moment I first heard it. But I could not remember who the artist was. Thanks to the wonders of the internets, I was able to track it down. It's "Rain" by Patty Griffin, btw. I was also able to find it on iTunes and thought I'd go ahead and buy that track when I realized I already have the CD, whereupon I got up from my desk and found it. There was a brief search, if only because my relationship with the actual alphabet is tenuous, at best.

And the song, it must be said, is as wonderful as it always has been. I love Patty Griffin.

But that's not what makes me amazed that I can get stuff done. Even though it required a trip from the tv to my computer to the binders with the CDs, the time elapsed might have been 5 minutes.

This morning, however, I untold amounts of time finding and watching various versions of "Rain" on YouTube. My fave: "Rain." Then I had to watch "Chief," which is my second favorite song on that disc. And then my mind went noodling off the coincidence that there is a song called "Making Pies" and that today is National Pie Day and that there is no pie in my house to be had. Then it noodled off to Hillbilly Gothic and how I wanted to include one set of lyrics from "Chief"** as a chapter hed but acquiring the rights was taking too long as was too much of a pain in the ass. Then I thought that it'd be fun to do a "Living with Music" piece for Dwight Garner's NYT blog but then remembered that I am a nobody.  Then I noodled off to a story that Scott Miller told me about picking Griffin up at the airport when she was doing some background vocals on one of his albums. Which meant I had to track it down: Miller and the car. And then I realized that Miller is playing on Feb 23 at the Laurel Theatre, which is one of my favorite Knoxville venues. I couldn't find airfare for under $400 and knew that I'd want to go with the Featureless Saint, which isn't at all feasible right now.

This doesn't even begin to describe all of the connections that I started to chase down, which involved Shawn Colvin, "Four Seasons in One Day," and Steve Martin. Like I said -- it's a wonder I get anything actually accomplished.

I don't know if this is just a writer's mind thing or if everyone does this. And the fact that I can even use the phrase "writer's mind" without snickering is amazing. My mind just seems to like little shiny things that it can line up into odd little rows while wasting staggering amounts of the day doing so.

** The lyrics:
I don't really know what I'm doing
I'm just watching myself in some play
And the actress looks like she wants to go home
And lie in her bed all day***

*** I also wanted to include the opening lyrics from The Old 97's "Timebomb"**** but that was an even bigger pain in the ass than getting the rights to the Griffin song. It took two months to even get someone to call me back. Bastards.

If you can tear yourself away from the hamsters... 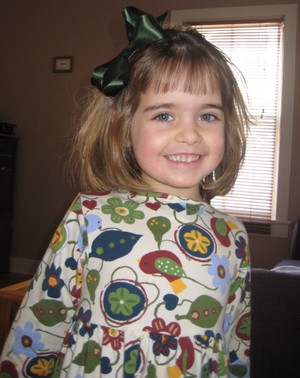 Every now and again I'll look at the kids and wonder "how the hell did that happen?" The above picture is one of those times. 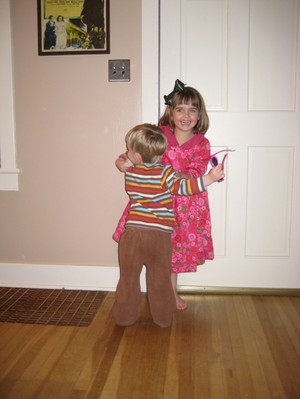 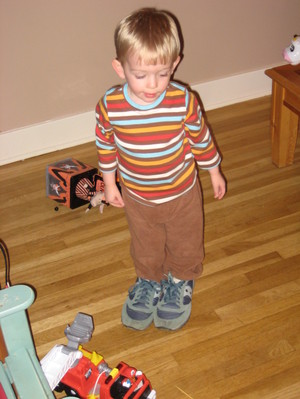 He also loves to stomp around in my tennis shoes.

In case you were wondering where my kids go those great outfits, wonder no more. The short answer is Camellia Cottage* in Middletown, DE. The longer version involves a message board, Knoxville, a fabulous woman named Georgia who owns Camellia Cottage and a big box of fabulous clothes that arrive on your doorstep. It's one of those only in the internet age stories, like the one involving Doula K and my skirt.

* The website seems to be more of a placeholder more than an accurate indication of all of the stuff they have at any given time. Still, I like to link when I can.

because all of your time won't waste itself

O! For the joy of flight! With hamsters.

Eventually, there will be something more substantial here. I need to make it to the treehouse first.