"Whereas religions, wittily defined by Simon Blackburn in his study of Plato's Republic, are merely fossilized philosophies, or philosophy with all the questions left out."

-- Hitchens, God is not Great, which I finally finished.

and, sent by my Featureless Saint:

"It's very easy to outrun lava."

* The Boy and the Ballpoint Pen: Part 2, the Aftermath. 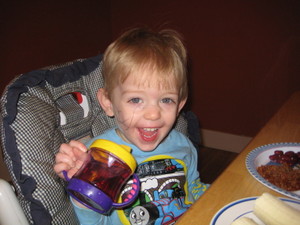 * The Diva has her first loose tooth, which is exciting enough. But now I have to figure out how the Tooth Fairy will visit. I've been trolling Etsy for themed tooth fairy gear but am on the fence. Any suggestions from those who've already sorted this out?

* Oh, joy. Dr. Dobson has a new book coming out about Parenting Girls. A quote:  Most importantly, we will talk about spiritual training at home, and why moral purity must be taught in the preschool years.

* Today is Trish's birthday. Go tell her happy birthday! (And, um, T, you're on the extended gift plan. You might get it before next year. I have all of the pieces, tho, and just need to find the time to assemble them into something useful.)

I think I might be about to strangle someone. I don't quite get it. We live in Upstate New York. It snows here. Sometimes, it snows a lot here. We have plows. We have salt. I can very easily get the Diva to school today. Really. It's not that bad. And yet -- snow day.

I will never, ever get anything done ever again. Ever.

Two things are keeping me from completely losing it:

1) The Teeny Project Runway entries are up.

2) The Trunk Monkey.* I will be buying my next automobile from Suburban, where ever they may be.

Let's all hope that there is school tomorrow, otherwise, well, let's just hope, shall we?

Feh. I will never get anything done again. Ever.

The Featureless Saint, however, is getting a lot done. 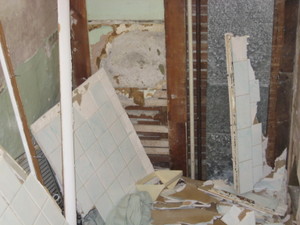 This is what remains of the downstairs bathroom. 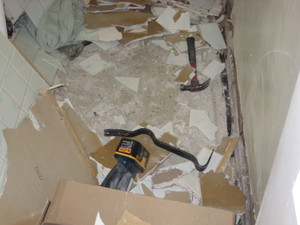 The various implements of destruction.

One of the best parts of these sorts of projects in old houses are the layers of wallpaper. 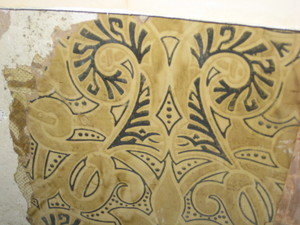 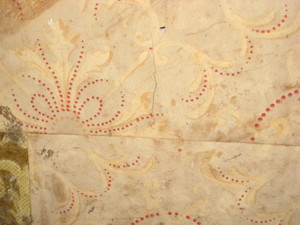 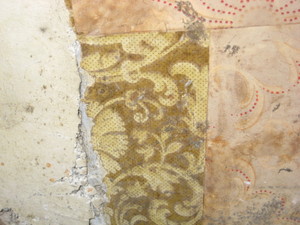 And, of course, eye protection was worn. 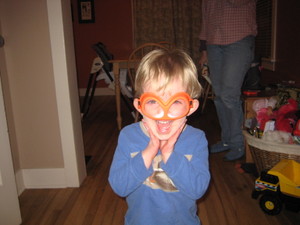 busy day of much busy-ness

No time to talk -- but plenty of time for some parenting infographics.

A moose fell from a 150-foot cliff in Alaska, just missing state trooper Howard Peterson. Peterson thought the moose might have been lonely, as the area is populated mostly by sheep, but state wildlife biologist Rick Sinnott disagreed. “They occasionally have bad days,” he said of moose, “like the rest of us.”

I am so sick of the sound of my own voice I can't even begin to tell you. But to tell you I'd have to hear my own voice, which would only add to the sickness of it. So, here, a link about pantsless subway riding via Doula K. Watch the video, then look at the pictures. My favorite bit was this:

"As usual, we got all sorts of different reactions from people. Most laughed and smiled. Some looked around with wild bewilderment. Others tried to ignore us. A few got angry and offended. There was a woman who was standing next to me for 10 stops. She didn’t crack a smile the whole time or give any indication that she even noticed what was happening. Right before her stop, she took out a camera phone and calmly took exactly one picture before exiting the train. Even she couldn’t resist."

I am now going to STFU for a bit.

the story of Maddy and the rock

It's not much of a story, frankly. I fear I've built it up too much.

The Dude, because he can't resist touching M's stuff, found a pink purse that had a big rock in it. It's a lovely rock, white and sparkly and granite.

"But what if he breaks it?"

"But. Moooo-ooom. He's touching it and it's my special rock!"

Cory, being Cory, then tried to hit her with it. Which effectively changed the conversation.

And there is the story of Maddy and the rock.

FWIW - in the because my life is weird department, there is a filmmaker getting B-roll over my shoulder as I type. She just started muttering about getting the sound of typing as "room tone." Odd. Very, very odd.

The bad news: Paul Krugman on poverty. If you can get through this without wanting to kick something, you are a stronger person than I.

The "internets are full of stuff" news:

The amusing news: Dave Grohl and Will Ferrell sing "Leather and Lace." NSFW, natch. If you can get through this without choking with laughter (especially on the line "you're f(&#ing me up, Will," you are a sterner person than I.

because my life is weird

A couple of months ago, I got an email from a Berkeley-based documentary filmmaker who is working on a project about post-partum depression. She wondered if I'd be available/interested to be involved. Sure, I said. I figured nothing would come of it, frankly, since that's what happens more often than not.

Several dozen emails and a visit to Oneonta later, she'll be in town following me around at the end of this week and beginning of next. So if you see me -- I'll be the one trailing an entourage and looking embarrassed -- say hi. Or, if you're camera shy, don't.

I'm not at all sure what to make of this. I feel I should go get a haircut or something. Instead, I plan to rearrange the yarn closet and grade papers.

It's hard to say when/where you can see the finished product. The director is planning on taking the festival route and will see what happens. I'll keep you posted.

Yes, my life generally is this odd. Remind me to tell you about Maddy and her rock.