"[Poodles are] the most desperate breed there is. They are just a little too bright for the servile role of dogdom. So their loneliness is a little more excruciating, their welcomes more frantic, their desire to please a little more intense. They seem to think that if they could just do everything right, they wouldn't have to be locked up in the silence -- pacing, sleeping, brooding, enduring the swollen bladder. That's what they try to talk about. One day there will appear a super-poodle, one almost as bright as the most stupid alley cat, and he will figure it out. He will suddenly realize that his loneliness is merely a by-product of his being used to ease the loneliness of his Owner. He'll tell the others. He'll leave messages. And some dark night they'll all start chewing throats."

-- John D. MacDonald, Nightmare in Pink. Clearly Travis McGee was a dog lover. Wait. Not lover. What's that other one?

Also - Nightmare didn't hold up as well as one might hope. Ah, well.

I just mailed my big box o' handknit off to my Loopy Ewe swappee.

In it was this: 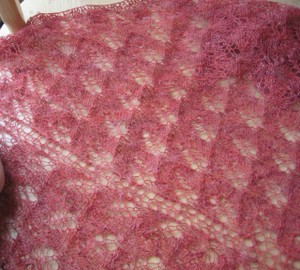 Kiri in All Things Heather Alpaca Lace "Russet." The color is more true in this picture: I'd completely forgotten how satisfying it is to block lace. It goes from a suspicious looking pile of crap to an actual pattern that makes sense. There's an analogy here that I can't find yet. Need more coffee.

I've posted pixs already of my favorite item from my swapper -- it's fingerless mitts, btw -- but Keitha gave me plenty of  goodies to choose from. Usually, I'm not a swapper. This one just tickled me and my expectations were low. But, dang, I am thrilled with how it turned out. As is Maddy, who carried off the pen and the notepad mere seconds after I took this picture.

Other knitting tidbits - Ann over at Mason-Dixon Knitting is hosting a contest that forced me to turn to the Featureless Saint and ask him if he had any taxidermied animals in prop storage. He doesn't, btw.

On the V-day and knitting tip - Rabbitch and her family know how to say "I love you."

On Book #2 - I hope I won't be giving too much away when I mention that I just spent $134.03 on a book of patterns. And have now looked at the patterns. And now want to vomit, just a little bit. What have I done?

On that note - February is my least favorite month. It's not the light, it's just the routine of the coats and gloves and hats and boots and shoveling and salting and snow days etc. starts to get me down. And I'm a little down, truth be told. Not like clinically or anything just can't work up much enthusiasm for much of anything, which makes the slog that much sloggier. Seems like some of y'all can relate.

The two-hour delay actually turned in to a snow day. For Maddy, that is. The rest of us had to work. There has been juggling. Woo.

And, it goes without saying (but I'll say it anyway), a lot of snow, big fat flakes the size of biscuits. I actually caught an undergrad -- who seemed abashed that I noticed him doing this -- catching snowflakes on his tongue with a sort of childlike glee. But it's that kind of snow.

This link may or may not work but -- this Get Fuzzy reminds me why a lot of me is glad Mooch has passed. I still miss the fat bastard, tho.

Spore looks like it will be the sort of game that I could waste vast amounts of time playing. I must be strong. Of course, my courage is fairly easy to maintain since the game's not out yet.

Lastly -- this email from one of the supervisors on one of my college campuses really says all you need to know about how we're all feeling about mid-February. It has a nice 19th century tone, yes?

"The mail deliveries will be a little late today as sickness has taken our mailperson and both backups.  The rookies assigned will do the best they can.  Thank you for your patience."

This week is trying to smother me. Nothing bad -- just lots o' stuff. And, soon, it appears, lots o' snow.

The second college at which I teach started their Spring term today, which means that my schedule on MWF is now very, very full. Also, my brain hurts. Tonight's only plan is to sit and watch the Westminster Dog Show. No, I don't know why I love it. Yet, I do.

In keeping with that, I want Irene Gallo's Cyclops Dog sculpture.

And that's all I got.

-- Roy Blount, Jr. in Long Time Leaving: Dispatches from Up-South, which I'm listening to as an audiobook. The woman who was laughing to herself walking down Center Street this morning (I'd gotten to the part where he called Tom Delay  the "thinking person's Satan") was me. Blount is a funny, funny guy, as both a writer and a reader.

Oh -- and when I have ample amounts of free time, I must make Eric Bloodaxe. It's a moral imperative. I also might have to knit a few mushrooms.

This time, it's not an object that I have knitted. My Loopy Swap partner, the fabulous Keitha, sent me some fingerless mitts that I adore. Why? First, my office is cold and I can wear them while typing. Second, virtually all of my shirts are too short in the sleeve department because I have freakishly long arms and these mitts warm my wrists.

Here's a close up: 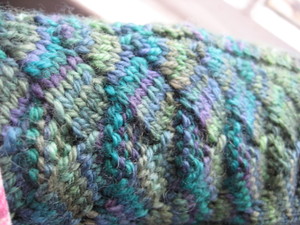 Her box o' goodies came a little early so I won't do the full reveal yet. But here's one other thing that was in it. 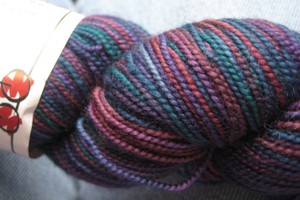 And, um, no. The thing I'm knitting for my partner is not yet done. Soon. 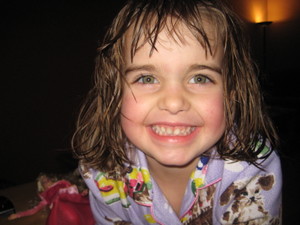 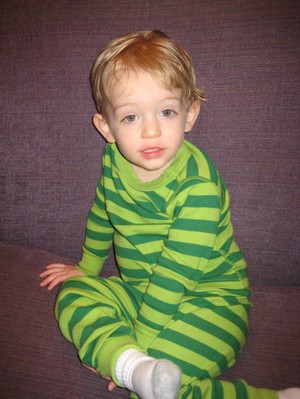 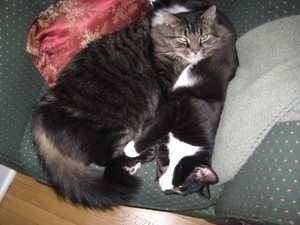 The cats are very cold. Do something, peasant.

Since my yoga class was canceled because I was the only one who signed up for this session, I decided to take another class at the local Y. For me, the whole fitness thing works better if I have to pay for a class. The thought of how many dollars I'm wasting if I'm a big, fat slacker is motivation enough.

Anyhoo. New class, one that combines weight training and aerobics and Pilates. Which sounds like it shouldn't work but is awesome, if exhausting. Most of what makes it work is Heidi Tanner Brantley, the instructor, who is exactly what you need. Positive and perky, but not annoyingly so. She's really good at targeting very specific parts of muscles, which is cool -- but I now can't lift my arms well or, you know, walk.

So now would be a good time to show you this -- Steven Brust wrote Firefly fan-fic. Mmmmmm.

Yesterday, when the Diva and I were driving home from school, she asked me about the campaign signs that are tacked to telephone poles right now. I explained that today would be the day that we voted, which is when we chose who we wanted to run the government. I mentioned that this was a presidential primary -- but didn't want to go into too much detail. I also mentioned that most of the time we were voting for offices like Mayor, Governor or President.

"So is the Governor a boy?"

"And the Mayor and the President?"

"Oh. But usually they're boys," she said.

"They usually are," she said.

I'll be bringing her with me to the polls this afternoon. I might even let her pull the big red lever because that is the coolest part when you're five. I'm not sure if we'll be voting for a girl or a boy, yet -- but we will be voting.

Nowhere near as charming as the hamsters, but still oddly satisfying: Kitten Cannon.

shameless self-promotion, number 287 in a series

Thanks to one and all for the congrats. There are days when I feel like a big, important writer person -- and it's been a weekend full of them.

This morning marked the end of that, though. The Boy walked up to me this morning as I was eating a bowl of cereal and said "This is for you." He then wiped a booger onto my outstretched hand.

That's how we roll around here. So this piece about The joy of germs, from the local almost daily, fits right in.

In other news - Knoxville has a moment to shine in the NYT. No, wait. Not shine. What is the opposite of shine again? Still, I have to echo Katie and say that the world needs "Thus Lumpy Spoke" t-shirts.

Also, a pair of bloggers are reading Infinite Jest, which is the best book ever. When the series start with comparing DFW to Johnny Depp, you know it's going to be good stuff.