Makes me feel all momified, which I'm not sure is good. I'm not sure it's bad, tho. I'm conflicted. I also need to hop off the fence about the gray and either color it or stop caring. And in the above picture I was trying Tyra's Smile With Your Eyes technique. I'm clearly doing it wrong.

Here's the thing I've been meaning to do for at least three years. Pictured below is my office chair, which has become very much like Steve Martin's cruel shoes. 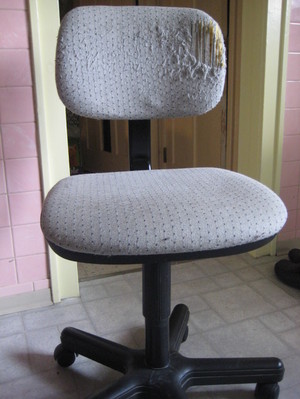 The chair was purchased when Scott and I moved into our second apartment in Austin in 1994, which would make this chair almost 15 years old. It was a cheap chair to begin with, mostly because I didn't need to spend all that much time in it but was sick of having to perch on the end of the bed to use my computer.

I did not intend for our relationship to still be going on, lo these many years later. Yet here we are.

I've been eyeballing replacements since we moved to Oneonta but could never justify spending the money. But the chair, which I wrote all of Gothic in while pregnant with Cory, is no longer meeting my needs. It no longer cushions what needs cushioning. The seat leans to one side, which makes my creaky back hurt. Two cats have attacked the back, each trying to outdo the other in terms of sheer destruction.

It was time, finally. 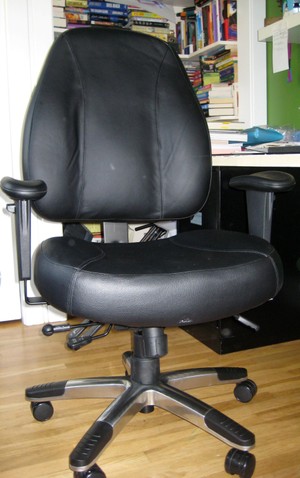 Meet my new chair. I am sitting in it now. It is bliss.

There are, however, about a billion different ways to adjust it. 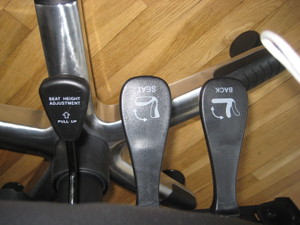 And I know that once I find perfection someone will come along and push one of the levers, thereby messing it up. Still, it is good.

Lastly, for Trish, who once said almost exactly what Rob says in this Get Fuzzy strip.

LOL. I remember that. Lo those many years ago.

Congrats on the chair.

You need some gel and slick up the sides of that baby... :)

I'm tempted to dye it purple. But the gel is good, too. I'll make it all Heat Miser.