Now that they are safely in the hands of my swap partner, let me present my version of Eunny Jang's Endpaper Mitts: 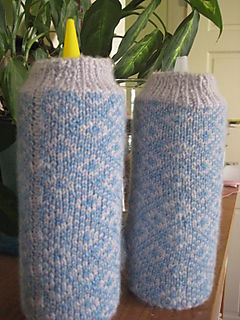 Here they are, blocking. Once blocked, they weren't quite so oddly lumpy. And Jang's purled seams are freaking brilliant bits of design.

Because the spouse is more spacial than I*, I engaged him in a conversation about what he might have lying around prop storage and/or the scene shop that would be vaguely wrist-sized and cylindrical. His answer was ketchup and mustard squeeze bottles, which were perfect.

The progress on the Mary Tudor: 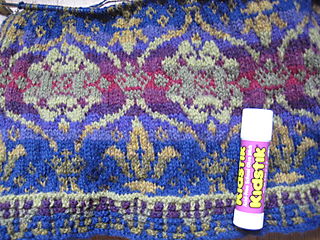 Glue stick provided for scale. One full repeat down, three more to go. On the body, that is.

Two random things, then I've got to do some real work -

A fifth severed foot has been found. It's amazing how quickly something moves from oddly fascinating to downright creepy. Why was it the fifth foot that pushed everyone over the edge?

I'm fuzzier than usual this morning because Trout, in his infinite twitchiness, was spooked by the sound of his own breathing (or something) at 3 a.m. and freaked the fuck out. Unfortunately, my face was in the path of his mad dash and I now have a deep scratch/puncture wound just under my left eye. I intend to tell everyone I was attacked by pirates. Play along.

* Spacial, not special or [airquote]special.[/airquote]

Hey, as long as you don't have to knit pegleg cozies if he spooks again. :-)

Trout did narrowly come close to losing a leg during the whole thing. But I wouldn't be able to live with the guilt.

And the foot thing gets odder...

Must have been something in the air. We were rudely awakened at 3:30 a.m. by a vicious (if very, very short) dog fight. After which Milo fell down the stairs. Find out, after dragging Milo into the vet, that the poor sap got chomped on the muzzle to the tune of a nasty gouge closest to his nose and a puncture wound right through his lip.

Although my vet did tell me of an even more disturbing story--a couple were sleeping the sleep of the just when the neighbors' cat, walking over their roof, fell into their bedroom (and onto their bed) through the open skylight. While their own cat was also asleep on the bed until rudely awakened by the interloper. At which time the couple woke up to a full-on cat-fight.

The sweater is looking gorgeous! And ..hee-hee.. thanks for providing some scale.

Our oddest woken-in-the-night cat story involved our first cat, Franklin (R.I.P). We groggily half-woke to the unmistakable mouth-full grumbling meow that indicated a fresh catch.* Joe had just enough time to begin saying, "I think Franklin caught a..." when Franklin dropped the thing (mouse/vole/something) in the middle of Joe's chest. Euuaaagh!!! Startled, Joe flung the dead critter, cat, and ... me clear out of the bed.

*This is particularly disturbing when you learn that at this stage of his life, Franklin was a strictly indoor cat.

I can see that I got off easy on the unpleasant-cat-awakenings front. But I do wonder what was in the air a couple of nights ago. Freakish animals.