we had 40 pictures of his shoes

Last weekend, we went to Baltimore to visit my grandmother, who is in a nursing home there. Of course, we also had to go see the aquarium. The following may only be of interest to my immediate family. You have been warned. 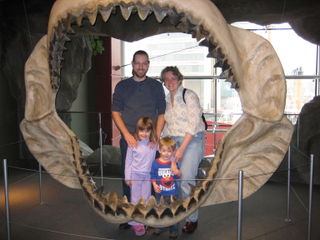 The megalodon. This one was just a baby. We were all impressed. The cowfish, which is my new favorite fish, if only because they are so funky looking. 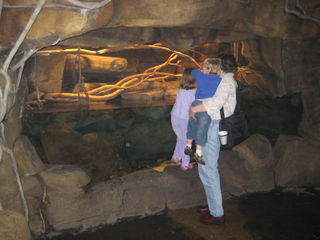 Imagine me holding this pose for an hour. One day, he will be taller. That will be a happy, happy day. 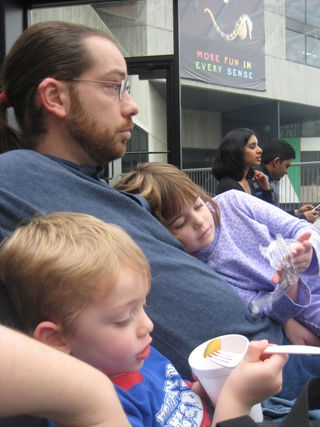 It was right around here, as we were waiting for a bird show to start, that Cory discovered that a digital camera makes a fine toy. Which is why the next 20 shots are a variation on this: 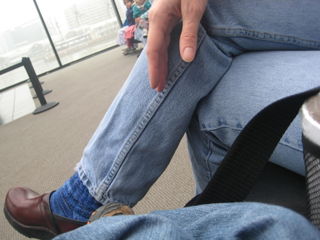 For Cory, the rest of our stay looked a lot like this: 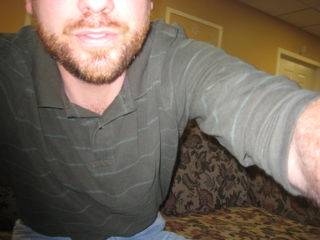 Outside of the aquarium, Maddy found her calling. She may be a scurvy dog. 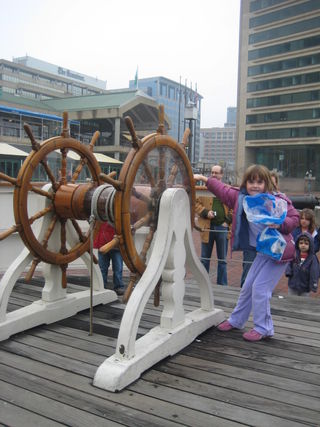 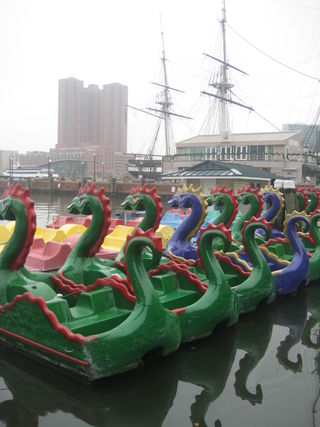 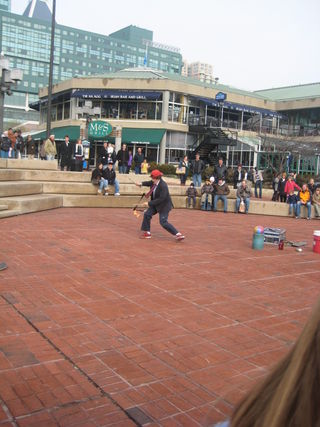 When the street performer lit his torches, Cory broke into a joyous grin and screamed "fire!" We are doomed.

The rest of the trip was fairly uneventful. We had brunch with insane and/or deaf friends who bought their boys drums for Christmas. We visited with my grandmother. We had dinner with my aunt and uncle. Family stuff -- but good, mostly. We'll be back sooner rather than later, if only so that I can see the cowfish again.

As for tonight, our grand plans are to continue doing mostly nothing, then going to bed. I may bake a cake. We might chuck the kids out in the snow, which we got a lot of last night. We are party animals, we are.

In celebration of the time off, we spent the last few days in Baltimore. There'll be -more on that tomorrow, since I haven't the energy to upload the pictures right now.

So, a small list o' stuff while I finish up the several tons of laundry that the trip seems to have produced:

* What I need come spring.

* This is a very guilty, guilty dog.  (Stolen from Making Light)

* The existentialism of Satchel the Dog.

* Maureen McHugh applies the 10,000 hours idea to fiction writing. What she said also applies to non-fiction, imo. One of the great advantages of working for a paper, whether daily or weekly, is that you have to write buckets of words on a regular basis, which means that you can build up the hours and get paid. Of course, you have to have logged enough writing time to be competent enough to get hired -- but that is a discussion for another day as well as yet another reason to write as much as you can in and during college. Which my students don't seem to believe -- they seem to think that writing is something you can learn through listening to lectures about writing.

* Mochimocki's MIL is a cross-stitcher after my own heart. And I'd pay for a bunch of these designs, plus any that Mm comes up with.

* I might be the last to jump on the Happy Meals & Happy Hour bandwagon. Glad to be on it, tho.

* Finally, some shameless promo: a feature I did for the local almost-daily that asks if "you are better off this year."

It will be covered to a depth of seven
inches by the little white plastic
chips at once soft and repellent
to the touch and with the ability
to bounce like baby beach balls
under the table and under the radiator.
They come in boxes with toasters,
with vitamin pills, with whatever
you order, as packing material : they
will conquer the world. They are
doing it already beginning
with my kitchen.

(Stolen from The Writer's Almanac)

House If it wasn't for Socrates, that raving untreated schizophrenic, we wouldn't have the Socratic method — the best way of teaching everything, apart from juggling chainsaws. Without Isaac Newton, we'd be floating on the ceiling.
Wilson: Dodging chainsaws, no doubt.

quickly, before I have to go wrestle the ham

I made a wreath! 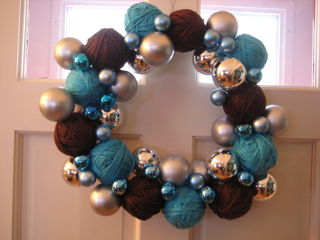 Once I saw the tutorial, I knew that my mission was clear. 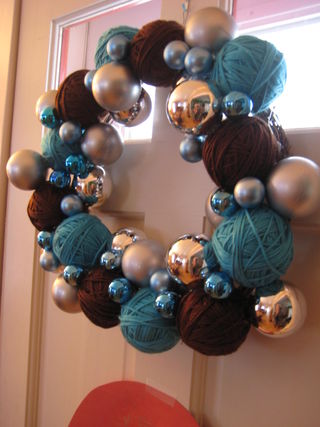 The yarn is Caton's Eco something-or-other. The balls came from Wal-mart. The hardest part was finding a wreath form, which the Wal-mart no longer carries. A local florist -- Gary's on Main for those in the area -- whipped a grapevine version for me for a whopping $4. I am dead pleased with the result.

Scenes from the morning/afternoon:

Christmas waffles with one of the gifts I got for the spouse, which was Dakin Farm bacon. Yum. There's nothing like handing a box of smoked meats to your significant other to make the holiday merry. 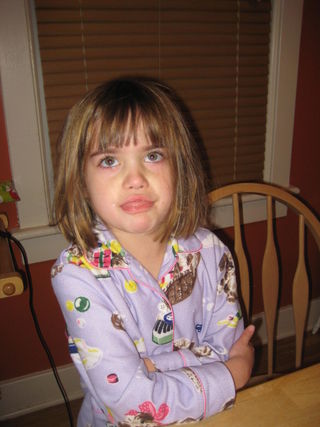 And, finally, it's not Christmas until someone sticks a projective to the ceiling: 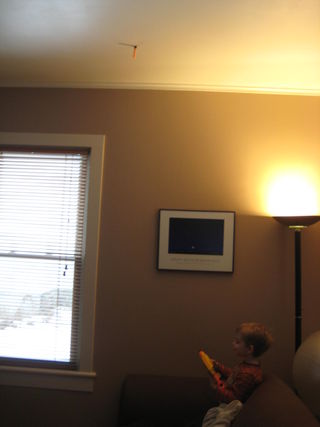 I hope your day is merry, happy and peaceful. And projectile free.

Tonight, as a nod to my Italian ancestry, I will make crab cakes.*

If I were going to be in Pittsburgh, I'm sure I could drop in on any number of relatives for the traditional seven fishes. And also those delightful pignoli nut cookies that my Aunt Terry makes -- but that's another post.

I've always liked the idea of the seven fish more than it's actuality, mostly because I really don't like most kind of seafood other than crab. I've tried. I have. I just can't cultivate a tolerance for it. No, not even lobster.

Still, I miss the family tradition aspect. And all of the wine and cousins and noise. And even the idea of rolling out the door after eating for four hours so that you can go to midnight Mass, despite the fact that it has been at least 20 years since I've been to a Mass that didn't also involve a wedding or funeral. I've always enjoyed the theater of it, however, and would go just for that.

Anyway, tonight, there will be crab cakes. I'll explain to the kids why I do this, even if I don't do the whole shebang, like Maria Laurino's family, which she wrote about in yesterday's New York Times.

In case I miss you tomorrow, which is likely, consider this an early Buon Natale. May it be appropriately merry and happy.

*Scott, in a nod to his love of fish, will make probably fry up some catfish. His ethnic heritage is more Swedish/Germanic than anything else. But his folks have been in this country long enough that the European traditions have been subsumed by the American ones.

* Make your own grenadine. My Dad and I were talking about all of the corn syrup in mixers and how it must be better to make your own. Now I need a recipe for homemade Rose's lime juice.

* I will know that I have "made it" when I can buy all of the Heath Ceramics dishes that my kitchen requires.

* I have some weird recollection of going here. I might have it confused with Christus Gardens, which I am saddened** to learn was knocked down not long ago.

* Frescapies! All of these sound so, so good.

* It is interesting what you find when you're looking for something else.

* Something I've always wondered: why isn't December the coldest month of the year?

* I seem to be becoming obsessed: more yarn-y wreaths.

* For the person who has everything: The Beef Jerky Purse.

** relative value of "saddened," of course. I love a surreal roadside attraction about just about any subject -- and Christus Gardens more than fit that description. Plus, now that it's gone, there's one less place that I can point to and say, "My friend Andrea almost got me kicked out of there."

not sure how it happened

I am slowly rediscovering the top of my desk. I'm stunned, too.

I also finished the ornament that has been waiting on my desk. Here it is, in situ (or "in treetu"): 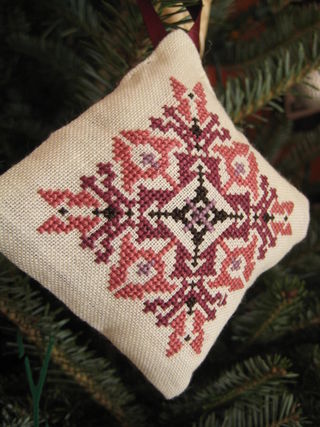 Later on, I might actually deal with Christmas cards. Again, stunned.

Kinda unrelated -- but it is because I got the above ornament  off of my desk that I found the note about this event that I'd hidden under it: For those in the Oneonta area -- The Green Toad is hosting a women-only book trivia night on Thursday, Jan. 29 at 7:30. Anyone want to team up?

Right. What else can I get done? I'm giddy from all off the finishing.

Yesterday's snowmageddon wasn't as bad as the weatherfolk feared. Only 5-6 inches, rather than the 7-12 that was predicted. Still, it was lovely and Christmas-y and all. Walking home from a cookie exchange last night, the Pie Goddess and I marveled at how pretty and quiet it was. 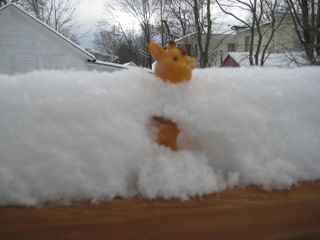 It's supposed to start snowing again tonight and well into Sunday. I need to look around for taller toys.

If you are squeamish, look away. 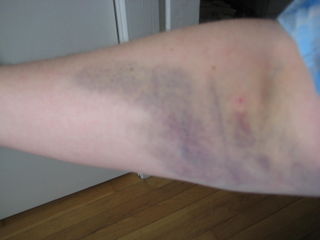 It's probably for the best that my camera and I were having some problems focusing this morning. The bruise is even more spectacular in person -- and goes almost all the way up to my armpit.

It looks much, much worse that it feels. This in no way should keep anyone from donating blood; it was just a random event that was more indicative of how my day was going than anything else*. I'll be going back once I don't have this whole hematoma thing going on.

"Please turn on the light. There's too much dark."

My blood adventure was just the beginning, as it turns out. Almost everything I tried to accomplish yesterday was foiled by my timing being off by *thismuch.* I spent the afternoon trying to do interview for a freelance project due on Jan. 1 but couldn't catch anyone at their desk -- even though we had prearranged when I'd call. Because of all of that -- I never did get the interviews and am trying again today because a good reporter never says, "fuck this. I'm going to bed." -- I didn't finish reading the last book  for my Locus column, which I need to do today because it's due tomorrow. Little things just kept adding up because my cosmic timing was just off.

I've decided to compensate by making cookies this afternoon.

I still don't have the interviews I need but will control what I can control and finish what I can finish. See? I can be taught that the universe won't bend to my will, no matter how much I stomp my feet and insist that it does.

In other news, we are currently waiting for the big snow to come. School is dismissing at 11:50. It looks like it might really snow-snow this time around, rather than just ice and sleet. We shall see.

I might have to break out my snow giraffe. Mmmm...winter.