down the rabbit hole

Long story short - I was looking for something else and found these. It's telling that I can no longer remember what that other thing is.

I had no idea that Etsy was chock-full of cross stitch patterns.

Yes, yes, you can get some renderings of common characters whose legal status is, at best, questionable. But there's a host of other cool stuff. Like beefrank's dedications to all things Whedon; TeaPartyRevolution's Gothic Lolitas; Larripin Labs' portraits of Schrodinger*, Kaku and Feynman; ExpressionEssentials hip-ass owl; Xavier Crafts' interpretations of Arabian rugs** and Maggiemwdesign's interpretations of the same; Nrapture's Cthulhu; tinymodernist's mid-century chairs***; andwabisabi's chandeliers and kiwi fruit****; and knottyyarn's movie quotes *****.


It makes the pattern I'm working on, pictured below, seem lame. 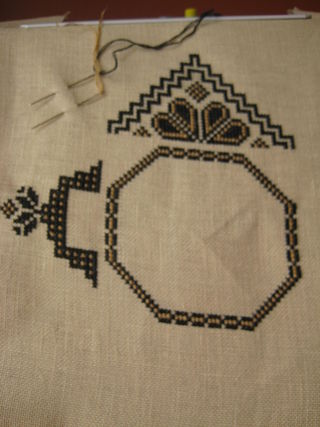 I love it anyway.

* No word yet on when the cat-in-box companion piece will be completed.
** which blow my mind, frankly. Especially this one.
*** for the Hub: the Barcelona is here.
**** and a martini glass.
***** I had to google the last one.

You just had to do that. *sigh* And I thought I was so over cross stitch.

Is there a particular pattern that moves you? And I find that xstitch gives my poor achy thumb and index finger a rest.