one down + easy garter stitch squares

The Diva is up with Grandma for her President's Day week break. My mind still reels at how much easier it is when there is one less kid to deal with. It's probably best that I don't have a time machine because I would use it for wacky crap like going back to one of the days when I was feeling harried with having just the one child so that I could point my finger and laugh at the mom-to-one me.

And if you can follow that sentence, good on ya. Coherency is an option that I am choosing to not exercise today.

In other news, I took all of 20 minutes on Friday to knit a square for the Dizzy Sheep's Blanket for Change. 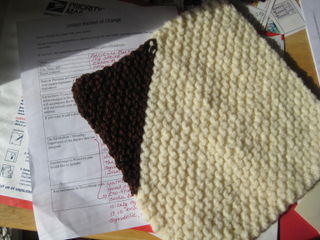 For a full explanation of why the square looks like it looks, click on the picture below so that you can make it big enough to read: 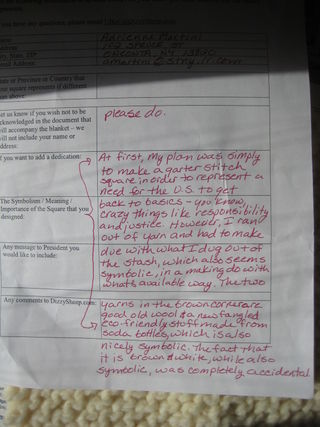 In other other news, I discovered on Friday that Lisa Horstman has a blog. Who is Lisa Horstman, you ask? Lisa is the former art director for Metro Pulse, the newspaper of my former employ. More importantly, she's a children's book writer/illustrator who is currently doing neat stuff with stuffed monkeys.

I find myself itching to knit some little monkey chapeaux or scarves or socks or something, once I get through my current unpleasantness. And speaking of, I think one of the cooler things about being a visual artist is that you can point to something at the end of the day that you did, even if you can't stand it. At the end of the day, all I can point to a file on my computer desktop and say, "No. It's bigger. I swear!"

It would be nice to have some sort of graphic representation, is all I'm saying.

Right. Back to it.

You can make graphic representation. It's how I managed to finish my dissertation! I had a list of each chapter and how many pages were in each and a running page total. You could totally do it with a running word total.

And if you need to be even more visual, make one of those fundraising thermometers.

Hey, thanks for the shout-out, you cheeky monkey!