I don't know that there is much holding all of this together other than we happened to have actual sunshine on Friday, which made we want to take pictures of things. The coming of spring also made me want to run around outside without a coat, boots or pants -- but the fact that it was only 50 (or 10C for you metric folk) was what stopped me.

So I took pictures while the light was good.

As a reward to myself for finishing the dang draft of the next book, I bought a small box of chocolate from Foodzie, which is a small site that acts as a clearinghouse for independent food crafters. This Etsy, but edible.

These were from Luca Chocolates. The packaging rocked.

The chocolates themselves -- vanilla buttercream, Earl Grey truffles and sea salt caramels -- were OK. My earth remains unmoved but they were good enough.

In the crafts-I'm-working-on department, Just Nan's* Winter in the Square

and Eunny Jang's Tangled Yoke cardigan in Jo Sharp Silkroad Tweed DK that had been marinating in the stash for a couple of years. 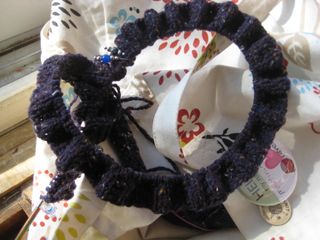 So far, so good. But it's hard to tell at this stage, eh?

Oh -- and this is my first project with Knit Picks wooden interchangeable needles. Anyone have advice on how to ensure that they don't unscrew themselves? So far, I've used the provided pin to tighten them as much as possible, which seems to be working. But wonder how long that will work.

Also, if you buy my house, I'll chuck in this lovely photographer's assistant, who does not like it one bit when you use his patch of sun for a backdrop. 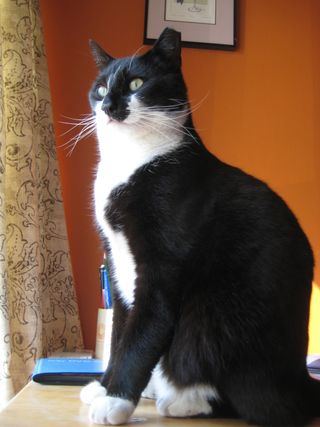 * As a rule, Just Nan isn't to my taste. I like these Season/Square jobbies, tho. I just ordered Spring, because I feel that my stitching should be aspirational even if we are certain to have a few more weeks of winter. What can I say? I'm quirky.

I'm one of those weird people who has never had a KnitPicks needle come unscrewed. I've pretty much given up the little key thingy. A large safety pin works just as well and can be attached to a knitting bag. I've also never had a wood tip come out of the metal base, but I'm pretty good about holding them by the base when I screw them together.

I suspect that people who have problems with them unscrewing are doing something in their knitting process that rotates one needle (or both in opposite directions). I say this as someone who deconstructed Denise needles while knitting with alarming regularity. I always chalked that up to being a tight knitter and having the wiggle stitches from the cord back to the needle. (You only need a quarter twist to undo a Denise needle; Knit Picks needs couple complete revolutions and you are going to have a stitch-snagging gap while it's partially undone.)

Actually, having used Denise needles before KnitPicks may have broken me of several twisting tendencies. Now that I think about it, I used to hang on to my needles more when I turned my work. I now use the end of the row as an opportunity to let the needles relax out of any kinks that may have developed.

My experience with the KnitPicks circular needles is that tightening with the little thingie makes *all* the difference. Since I've started using it consistently I haven't once had needles come unscrewed in use. Gonna have to find a safety pin, though, since the one thing that makes me nuts about the little pin that comes with is the lack of a closed loop to allow it to be chained to something.