I never became a biologist, but it was nice to think the experience wasn't wasted; one of the best things about writing is how it redeems, not to mention recycles, all of one's prior experiences, including -- or perhaps especially -- the failures.

shameless self promotion, 311 in a series

Apparently, this is the week in which writing that I'd forgotten about finds its way back to me.

In addition to the Edible Austin piece making it online, this Locus review of Adam Roberts' Yellow Blue Tibia is up as well.*

And, yesterday, just as I was walking out the door to my day job, the phone rang. Caller ID said it was UT Austin. I assumed that it was the alumni office begging for money, so I proceeded to not answer it.

Got to campus -- my commute is about 2 minutes and doesn't involve a traffic light -- and there was an email from George Sylvie, one of the profs I had at UT. Rather, there were two emails; one was sent to my SUCO address and the other was sent to my personal address. He had also called Scott's office phone because that it the phone number that SUCO's guide lists as my office phone, too.**

I hold this up as an example of what good journalists do. When you really need information, come as close to stalking as you can without breaking the law.

All of these messages, since, yes, that first call from UT was also from Sylvie, were less exotic than one might hope. The department is putting together a first year J text and wanted to excerpt a bit from class story I wrote in 1997. Sylvie needed my permission, which I gladly gave.

FWIW, I have no idea if this snippet will be an example of what to do or what not to do. I also really don't remember the story. I only vaguely remember the class, for Pete's sake. I do remember Sylvie, however. Good guy. He collects matchbox cars, or did 12 years ago.

Is it weird that I can recall that but can also promise that I wouldn't be able to pick him out of a line-up? And that the only things I remember from my copyediting class were Rusty Todd's stories about Kim Jong-Il? How on earth did I manage to pass?

** It's not, technically. But I also don't have an office, so calling me there is as good as anything else.

shameless self-promotion, 310 in a series

Somehow, I lost track of this one. My memory is a colander.

Cooking Gluten-Free from the Spring Edible Austin. Now if only I was in Austin to enjoy these eats.

* When looking for the agent of your death, look in the mirror, not abroad. (Scroll down a little to get to the beginning of the essay.)

* True Mom Confessions just make me sad. I should be the last to judge but if you are that unhappy,  you're doing it wrong and need a break. Martyrdom isn't its own reward.

* A slideshow of botched disaster responses, lead off by Italy's whistleass-in-chief Silvio Berlusconi. I need to remember to ask my Dad - also a Silvio - how he feels about Berlusconi trashing his first name.

* I loved Mike and Mel on The Amazing Race. I love them even more in this interview with Terry Gross (who I think was flirting with Mike). Also a hoot is Gross' interview with Russell Brand, who I want to have read his book to me.

* I'm all for crafting whatever it is that you want to craft. Still, I have to admit that I don't quite get these potted plant cozies. What am I missing?

* This poster full of advice for time travelers has been posted all over the place. Here it is again, because I love it.

* This makes me sad: Dr. Steven Parker died. Who will give us common sense kid advice now?


* On a more life affirming note: from Doula K: More proof that train stations are the theaters of the future.

** in a totally nonsecular sense

Monday and a question for the fiber people

(Attention fiber folk - I have a question for you at the bottom of this post. Skip there, if my parenting musings don't appeal.)

There are parenting moments that take you by complete surprise. Yesterday morning was full of them.

Given how not-religious we are, Easter morning generally involves finding candy filled eggs the Bunny left, followed by sweet breakfast treats and crappy TV. Later, there will be a big dinner, - turkey this year. Then, bingo-bango, Easter is kaput.

It's not a big hairy deal in our house. Which is why I had no qualms with letting the Diva leave on Good Friday for a weeklong road trip adventure with her grandmother. And yet, I missed her something fierce yesterday, even though I also enjoyed just having one  kid to manage. Going from 2 to 1 is a freaking spa vacation.

But it's just not the same, you know?

Still, I think the Boy deeply enjoyed finding all of the eggs himself, without being shoved aside by his sister. We shot a video for the grandparents -- or anyone else amused by a 3.5 year old discovering eggs. Please ignore my spectacular Easter morning garb. Also, the squeaking noises are Barney, pictured here behind bars earlier in the day: 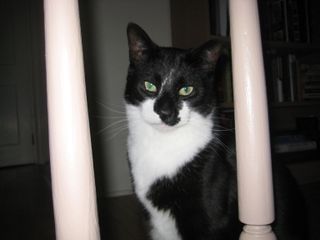 I don't know what he was trying to tell us during the egg hunt. Timmy was not in the well.

Right. Now for the completely unrelated question for the fiber people --

What is the most glorious object you could imagine making with handspun yarn?

... Second, two Bush terms that went about as well as Biblical flood—see above—have left the party denuded of all but its most ideologically-driven elements. A party answerable to Sean Hannity and Rush Limbaugh is going disapprove of just about anyone and anything in what during the Bush years became known as the “reality-based community” simply because, well, it’s there...

I decided to rethink my plan for patching the elbow hole in my beloved gray sweater. Rather than make the koigu work, I re-dove into my box of odds and ends, pulling out all of the yarns that I thought would felt. Then I knitted a rectangle out of two of them. 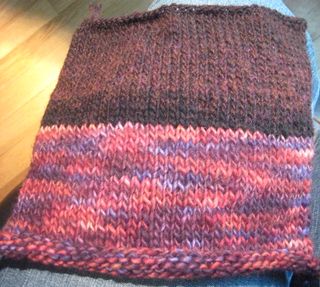 The top half is Noro Kureyon; the bottom half is Malabrigo worsted. Colors unknown because the labels have been stolen by gnomes to line their nests. Or something like that.

I chucked the whole thing in a pillowcase, which I then chucked in the washer. Then I cut patches, sewing one from the inside out and the other from the outside in. Why? No idea. Just feeling kicky. 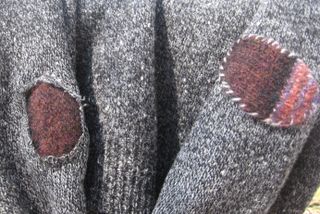 I'm not sure I'm in love with the end result -- but this is a sweater I only wear around the house anyway, so I'm not too worked up about making it better. Honestly, I just would like my elbows to be as warm as the rest of me. On that level, it's a win.

Also a win is this picture by Maddy: 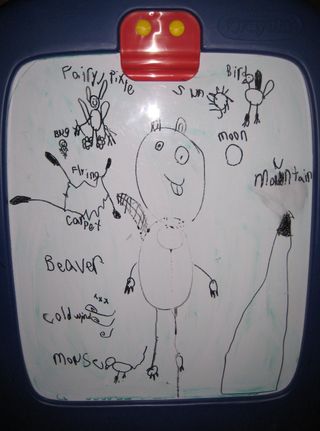 The flying carpet is my favorite bit.

Also a win is this gift from the Hub: 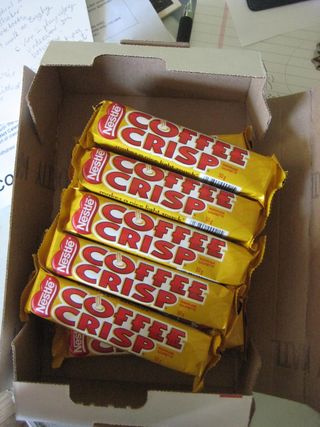 Yesterday was my birthday and I am now officially in my late-30s. I celebrated by driving to Binghamton with the Pie Goddess and buying underpants because I am that much of a party animal.

I had some great idea for a post today but can't remember what it was. I would take this as a sign of my advancing decrepitude; however, I'm not that old and forgot everything when I was in my early 20s, too.

So, something to think about, instead.

Artist Lee Gainer has a series of prints showing what sorts of diamond wedding rings men in various professions could buy for their intended. Leaving aside the politics/ethics of diamond marketing, am I the only one who can't tell a difference between any of these rings? Granted, I'm a minimalist when it comes to jewelry* and have no eye for it. Seriously, tho. All of these rings look the same, no matter how much you spend.

It's not just me, right? Right?

* When I first read their signs, I assumed that these local protesters were just really big Battlestar Galactica fans. Then I read the story, which proved, among other things, that I really need to get out of my house and away from the TV.

* You had me at "Braised Sweet Sausage."

* If I ever get a Kindle, this is the cover I will make.

* Finally! Slate's Explainer agrees with me about how 3-D movies still, even with all of the new technology that has been much lauded and/or ballyhooed, give me a pounding headache. I'm feeling all vindicated now.

* Your feel-good link of the week: Five tips for dealing with feeling under-appreciated. Oddly, not one of those tips is "Kick offender in shins until he/she tells you you are wonderful."

* Stolen from Making Light: A sign that made my week.

* It's too bad that this title and cover image is already taken. That's really the sort of subject I could work with.

* A group blog by students at Pomona College who are studying the works of DFW. I want to take this class.

* Further proof that I am easily amused: this critter cracks me up.

signs that there may be a thaw soon

Last Thursday, the weather was pleasant enough here to take a nice long walk in the woods, of which we have no short supply.

I didn't take that many photos but it may be telling that the ones I did take revolved around either moss or crocuses. Why I am drawn to these plants, I don't know.  In my defense, there were also some shots of lichen, which came out looking like, well, lichen, whose true beauty seems to be impossible to capture in digital form. 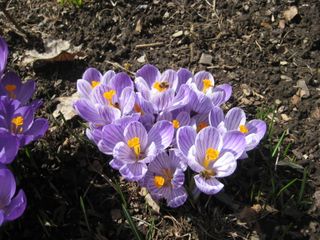 The little black dots in the photo above are bees. Bees! Proof that this long, dark cold time may be making its way back to the underworld from whence it came. Today's weather notwithstanding. 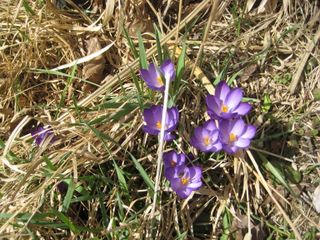 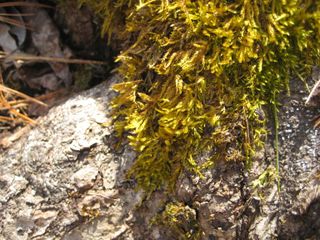 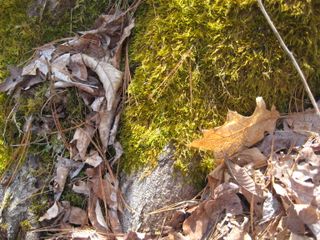 I also passed this house on the walk back home. Every time I see it, I wonder if there was some kind of geographic rift that dropped in in Upstate New York from its home in Florida. I also think that it might have been inspired by Duplo blocks. 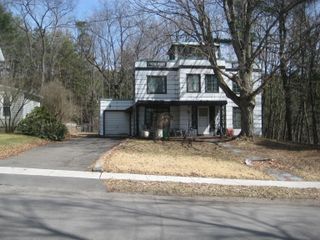 Finally, the Pie Goddess made cupcake lollipops a la Bakerella for a school bakesale. 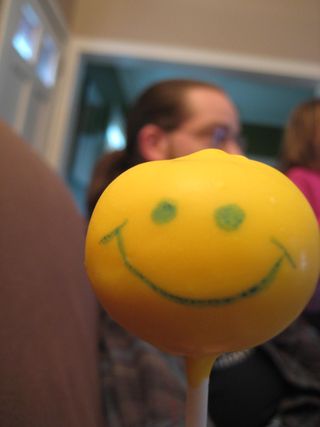 Sure, he's all smiley now. Wait until you take a bite into his brain.