two movie recommendations, should you need them

Go see UP. I now know that I hadn't really lost my sense of wonder, just misplaced it in my skull somewhere.

Rent Hamlet 2. I laughed. I laughed some more. It's probably funnier if you've done theater; still, very funny even if you haven't.

Oh, and ancillary quote of the week from one of the lawyers at the house closing: "That form is accurate but incomplete." Lawyers just don't speak the same English the rest of us do...*

* There was also a form labeled "Duplicate Original." I'm still not sure how time would have to bend to make both of those descriptors true.

These Wall Street players are enormously compensated, which supposedly means that society highly values their work and is willing to pay them a premium to do it. Having been given that kind of responsibility and trust, these assholes should not then force us to police them as tightly as we police those who we expect to steal from us, like third-rate car salesmen, telemarketers, hookers and three-card monty dealers. With that kind of money they should be setting an example. We are paying them as though they are leaders of society, so they should lead. Instead they ripped us off like common criminals. I mean, the level of morals here is astonishing. In my entire life I’ve never met a drug dealer who would even think about trying half the shit that banks like Goldman Sachs and Citibank pulled during these years.
-- Matt Taibbi

The great unpackening continues. But I now have internet! Let there be rejoicing!

because it is never easy

In the last 48 hours, we have moved all of our crap, closed on two houses (one sold, one bought) and convinced the daily paper to start delivering to the  new house. Slowly-- oh so slowly -- order is being restored.

I'm still waiting for Time Warner Cable to come flip the magic switch that will bring the wonders of the internet (and phone and TV) back into my life.* They did a great job with getting us disconnected spot on time. So much so that if you sent email and/or phoned during the last 48 hours, I can almost promise that  I didn't get it. If you don't hear back by the weekend, holler.

Speedbump two is that it looks like we're going to have to replace the hot water heater in the next few days. I know what a dying hot water heater acts like because we JUST HAD THE ONE REPLACED IN THE OLD HOUSE BEFORE WE SOLD IT.

Back to the great unpackening...


* I'm posting this via an unprotected network that Scott's computer can pick up from the back of our house. Thanks unknown wifi source! I promise to use you only for good.

Right. I'm posting this early because we'll be spending most of tomorrow lugging boxes to and fro. Then, just as a programming note, I won't have internet access again until Thursday sometime. So, um. I'll see you on the other side....

* Mostly for my husband but still one of my favorite Friends bits ever.

* An engineer's guide to cat yodeling.

* One of the reasons why I find traveling with kids so difficult.

* In this economy, one must have priorities.

* Kirstie Alley can join Tom Cruise on my list of people who can suck it.

* Yet another example of why journalists should not be the ones who interpret the data. Question the results, yes -- but actually formulate theories on what the numbers mean? No.

* I could waste vast amounts of time with Colorhunter.

* Betty Crocker is coming out with a range of gluten free baking mixes this summer. I am mostly happy about this.

* Not only is Mary Roach a wonderful writer, she's a darned engaging speaker as well. Of course, her subject matter, which includes Danish farmers and pig orgasms, doesn't a lot of the heavy lifting for her.

* Galaxy Zoo! Help astronomers figure out all of the data they've pulled out of the SDSS. This makes me inexplicably happy.

shameless self promotion, 313 in a series

Monthly column: in which the Boy assaults Princess Belle.

qotd, plus my anger breeches its dike

The Greek word sardonios means "of Sardinia," referring to the Mediterranean island where the silver-bellied fish are still abundant; it also bequeathed upon us the word sardonic, in reference to a Sardinian plant that produced facial convulsions "resembling horrible laughter, usually followed by death."

-- Bottomfeeder by Taras Grescoe, whose Sacre Blues I plan to read before heading to Montreal. Great writer, so much so that he's kept me captivated by a food I don't eat.

I was cool with letting the previous administration off the hook for all of the (allegedly) illegal acts they committed. While I do think that breaking the law deserves some kind of punishment -- or, at the very least, investigation -- moving on did seem to be what the country as a whole needed. Why mire ourselves in the muck of the last eight years for another eight (or 12 or 20)?

After Cheney's most recent speech, I'm done. My post-ironic defenses have been breached. I want to see him on trial. Full stop.

(Actually, not full stop -- most of me wants to see him waterboarded live on the TV but I'm aware of the contradiction. So I'll settle for a trial. )

more on the post-its

Since my brain is threatening to leak out of my ears, another example of M's post-it note work, which was unearthed during packing. 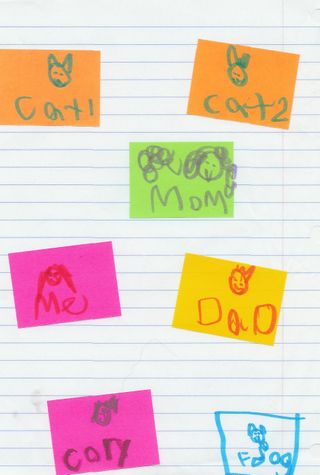 The art itself is done with highlighters, which makes the colors a little wonky when I scan them.

Scott and I still can't figure out why she doesn't write the cats' names. She knows them. She knows how to spell them.We are, however, thrilled that she has started to include her brother in these portraits again. And the "F-dog," we think, refers to a "future dog" rather than a "fucking dog." At least, that's what we're hoping.

Before anything else, knittas should read this. Heh, I say. And heh again.

While it's not a nine-dimensional hypercardigan, the Tangled Yoke, she is almost done. 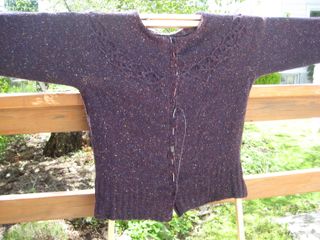 FWIW, I arsed up one half of the cable pattern.  Given that it doesn't seem to bother me,*  I am done with the knitting portion of this project.

All that remains are buttons. My button stash, such as it is, is packed for the duration. I'm fairly certain that I won't find enough appropriate buttons in the bottle, however, and will have to go on a shopping expedition, which is more than my feeble brain can cope with right now. So buttons (and a finished-finished picture) will have to wait.

Oh -- and my unique closures for the blocking process? 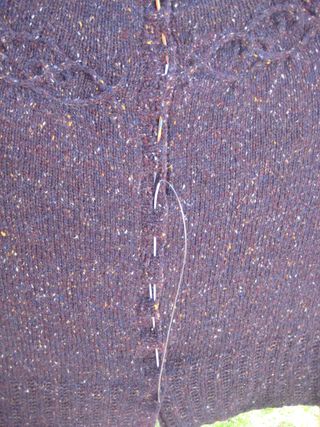 The needles I used to knit the thing, pressed into action because my pins are also in a box.

Speaking of hacks, anyone have an idea for homemade yarn bobbins? I'm going to need some soon for a sekrit baby project but mine are, you guessed it, in a box. Feh.

A shorter list this week since all of the end-of-semester crap and moving prep is eating into my sitting in front of the computer time:

* Two of my favorite male celebrities, talking to each other, one of whom is wearing a kilt.

* Lois McMaster Bujold is working on another Miles book. Great is my W00T.

* More wisdom from Dan Savage, this time with regard to frozen pot pies.

* I want to go on about six of these.

* I'd much rather listen to a speech given by someone who failed, since that is much more likely than unmitigated success. It's what you do after you fail that makes the most difference.

* Great piece in the NYT about what your credit card company knows about you.

* More about space: a slideshow of scientists discussing their favorite pictures from the Hubble.

Also -- for those in the area -- do you know of anyone who'd like a massage table?

why I can't keep track of my post-it notes

Maddy likes to play on my computer, which is on my desk, which is scattered with office supplies. I can never find post-its, despite the fact that I buy them in the mega-extra-super large packs. I've finally figured out why. They make perfect (if wee) little art canvases. Her most recent series, doodled while watching Sleeping Beauty on my Mac: 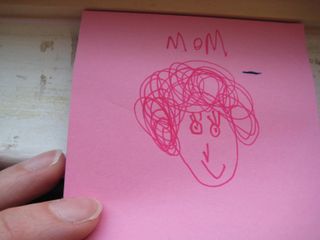 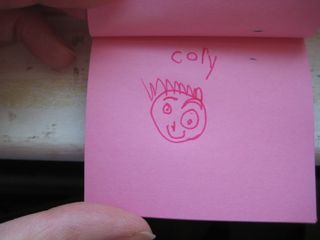 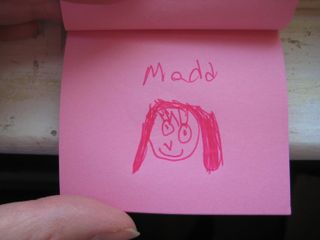 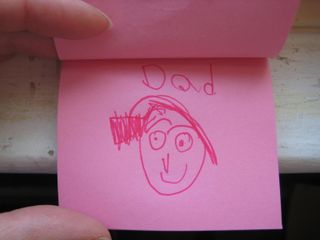 Scott doesn't have an ax handle sticking out of his head. I believe she was trying to capture the j'ne se-qua of his ponytail. 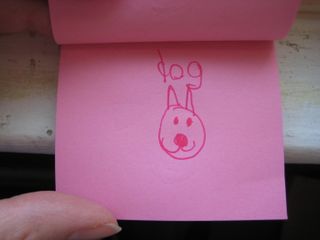 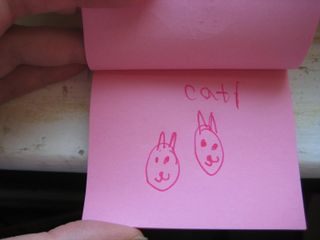 I think she got the resemblance pretty close on that last one. 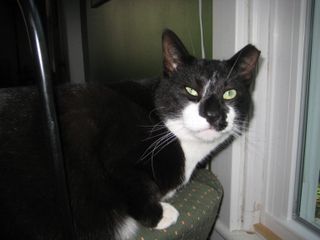 This is his smile.