Quick list today. Must take the Diva to her 7 year well kid visit. Any guesses on her current height?

* Our next vacation might have to be to the Wisconsin Dells, if only to go to Wizard Quest.

* Also on my next vacation, I'd like to tölt.

* Scratch all of that. I want to build a vacation around little known places in history.

* From my sister-in-law, who discovered this while looking for something completely different (and Russian): a wine rack. Literally.

* "Why do they so easily dare, not just to judge, but to give expression to their disdain, disapproval, smug superiority? And why — perhaps most to the point — do we put up with it?"

the mighty temptress that is sleep

As mentioned earlier,* we've started locking The Boy's door at night until he winds himself down and goes to sleep. For what it's worth, I don't even lock the door anymore, for the most part. Once he figured out that it wasn't going to open, he stopped testing it.

Anyhoo. There is a new complication. We've added a bookshelf in his room. Now he wants to stay up all night pulling books off of the shelves and lying on the floor to read them. Sleep keeps winning, tho. 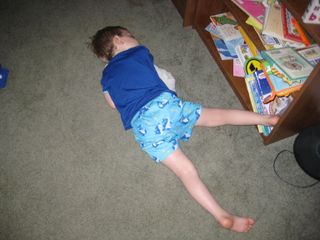 And, offered with only the comment that the easily offended might want to look away, Exhibit B: 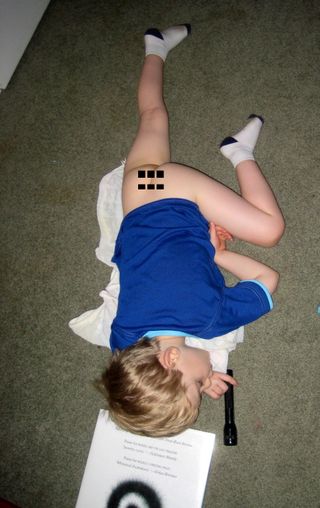 It's going to be a long summer.

* So far, there's only been one piece of "how dare you!" mail, the writer of which wanted to remain anonymous. Her message was, essentially, the ASPCA and the Department of Child Welfare ought to be called. Also, I ought to be ashamed of myself. Noted.

qotd, as a new york resident myself...

On behalf of the people of Illinois and New York, I’d like to thank South Carolina for giving us Mark (“I’ve been unfaithful to my wife”) Sanford. Finally, a governor who’s weirder than Rod Blagojevich and less responsible than Eliot Spitzer.

go on without me

I seem to have celebrated Maddy's first day of summer vacation by getting sick. Nothing serious, just a summer cold. But, still, she's a little irked that the mommy who moves around and does stuff isn't to be found on her first! day! of! fun! Times are tough all over.

She is thrilled, however, that tomorrow is her 7th (!) birthday and that Saturday is the party. My hope is that I can remain upright through it all.

Back to flopping on the couch. Woo.

I finally sewed the buttons on. 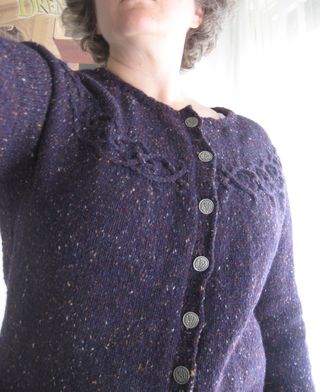 I could not be more pleased. 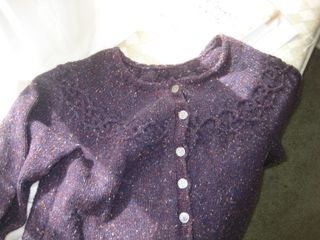 The buttons are from The Ram's Horn Studio. There was a weird snafu when I ordered more of 'em -- I'd already bought five at Rhinebeck a few years ago -- and they tossed in an extra card o' buttons just because. Which was just sweet. 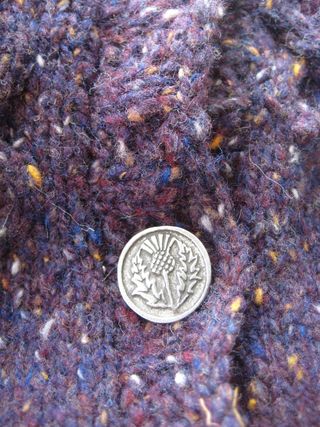 it's a good thing I got this done. Maddy's last day of school was today. That sigh you heard was a district's worth of parents resigning themselves to hearing, "I'm soooooooo bored" for the next 10 weeks. Woo.

Hope I get a chance to finish this, tho: 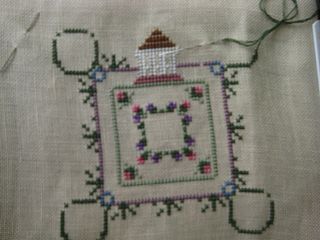 Sorry about yesterday's silence. I finished up book edits, then realized there was nothing left in my brain that could even be moderately interesting. But the edits are now in and my summer can begin in earnest. This summer will be filled with kid schleping, new house tweaking and proposal writing. Not sure any of that will be remotely interesting. Will do my best.

* Has anyone tried making their own shampoo?

* An NPR story on going gluten-free. This is also a good argument for parents trusting their instincts.

* If someone could deliver a Heaven and Hell cake to me, I'd be much obliged.

* Dooce captures how wrenching those first few weeks as a parent of two can be.

* From Boing Boing: The Crap They Built Where the Beautiful Old Train Stations Were.

* I am increasingly convinced that Jo Walton and I have the same books on our respective shelves.  The Crow Road is perhaps my favorite non-SF Iain Banks book, which means that it's one of my fave books ever.

* From the sublime to the ridiculous: Double XX's round-up of stripper memoirs.

shameless self-promotion, 315 in a series

My Daily Star editor is running a betting pool on whether or not this piece earns me a visit from DCPS. If you want in on the action, I'll forward your name.

Reading was not an escape for her, any more than it is for me. It was an aspect of direct experience. She distinguished, of course, between the fictional world and the real one, in which she had to prepare dinners and so on. Still, for us, the fictional world was an extension of the real, and in no way a substitute for it, or refuge from it. Any more than sleeping is a substitute for waking.

-- Jincy Willett, Winner of the National Book Award, which I am loving. How have I not read Willett before?

These may only be of interest to the grandparents. Still, I wanted to get them down before I forgot and they don't lend themselves to a longer column that I might actually get paid for.

1) Now that he is in a big boy bed in his own room, Cory has a new nighttime routine. When he was still in the crib, we'd read him two stories, fling him in the baby cage, turn off the lights, shut the door, and listen to him sing himself to sleep. Now we do about the same thing, but substitute bed for crib. He doesn't sing as much, which makes me sad. He has realized, however, that he can lie in bed and look at books. As long as he's quiet and in his room, neither Scott nor I actually cares what he is doing.

When we come up to bed, which isn't that long after they go to bed, because Scott and I are old and tired, I usually check on the Boy and turn off his light. Sometimes he falls asleep with a book or two clutched to his chest, which is so sweet I almost can't stand it. The other night, I started walked into his room to do my nightly lights out. I noticed that even though his eyes were closed, he didn't really look like he was asleep. And so I said, "Are you sleeping?"
To which he replied, "I am."

I nearly wet myself. He didn't get why it was so funny.

2)  The Diva was invited to a playdate at a new friend's house. It's a family that I'm acquainted with but don't really know that well. I know them well enough to trust them with my kid, of course, but don't know every last detail of their lives, if you know what I mean. Besides, she's almost 7. She has a pretty good radar for unsafe people and situations.

Anyway. I walked down to fetch her. On the walk back, I mentioned that her friend's mom wasn't home. Her dad was, tho.  I also mentioned that while I know both the friend's mom, I almost never see both parents together. Given that I'm not always the most observant toad -- proved by my just realizing that the parents of another acquaintance family had gotten divorced three months ago -- I asked the Diva if the mom and dad of this family lived together.

"I think they do," Maddy said. "There was cleanser in the bathroom. A mom must live there."

i can haz grammar? (part two)

"Perhaps the best advertisement for the restorative powers of yoga is spending a few minutes in a room with Cyndi. She is warm, bubbly and infectious."

- Me, from the Sweater Quest manuscript.

In other, more silly news, I love the Real Housewives of New Jersey. There. I've said it. I know these women. I grew up with these women. Except for Danielle, I think there are far worse women you could be. And if my relationship with my teenage daughter is as comfortable  (in a parental way, not a best friend way) as Dina's with hers, then I've done something right.

Back to the edits. Woo. I just passed the halfway point, tho. Go me.