"...if I have learned anything about money in my thirty-seven years of living, it is to ignore it. It just scares you. It's like, what if you had to add up all the meals you would need to eat to keep yourself alive for the next forty years? What if you had to sit and calculate all those sandwiches and potatoes and all those pounds of broccoli an all the trips to the store to buy all that stuff and all the time it would take to cook it? Well, you'd be too exhausted to eat. You'd be too worried about how in the world you were going to accumulate nineteen thousands pounds of chicken.

Same way with worry, in general. You take it one meal at a time, and you put your faith in digestion."

So here I am, diligently beavering away on writing stuff -- yes, that is the technical term -- when I look up and see this from my second-story office window: 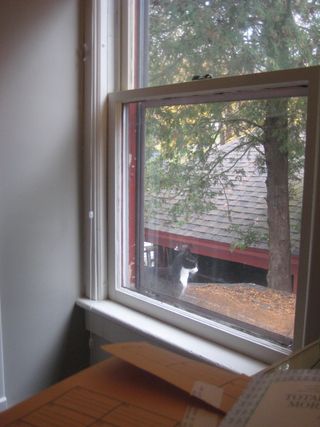 That would be Barney. 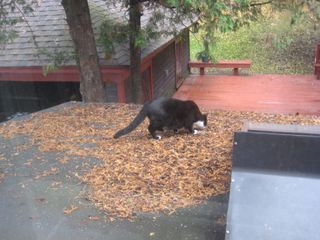 He doesn't seem to want in. Just wants to sniff the roof for birdies and bats. Or a squirrel. A squirrel would be lovely.

And then he was off again. 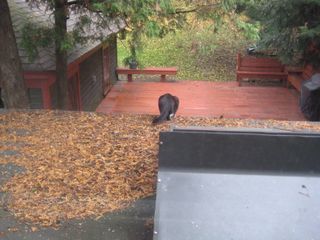 This could very well be the most excitement I have today.

shameless self-promotion, 323 in a series

From Upstate Life, the quarterly magazine published by the almost daily: Fall is a great time to get on a horse.

Also, and unrelated, a Canadian friend of mine once lambasted me for the fact that Fox News is the most watched news network in the US. I didn't have a great response for her. Scalzi does, tho. I defer to him.

* Double X's Samantha Henig does the "Master Cleanse," which is interesting in and of itself. However, I'm just thrilled to now know the term "Orthorexia."

* It is the time of year when a less-than-young woman's follies turn to snow gauges. I like this one but am not in love. Anyone have a recommendation?

* The new steampunk revival is making me want to dress up. It doesn't help that it dovetails with my craft problem. But where would I wear such an outfit? Hrm. The upside is that that many layers of clothing is practical in Upstate New York; the downside is that my students would snick.

* One of Iain M. Banks' Culture stories will be made into a movie. I'm not sure how I feel about this. Good, I guess?

* I seem to be largely invisible at Home Depot, too.

* I'm fairly certain I could never do this.

* Another entry on the list of Things I Don't Need But Still Sorta Want: Pussy on the Prowl.

* On the days when it all seems to be too much, all I need to do is watch this clip and suddenly all is well again.

* The irresistible allure of baby faces. (Stolen from blogless Ed)

* Coming soon to a theater near you. This may only be funny to those with small children.

another front in our war against nature

So Friday night, round about 12:30 a.m., long after the Spouse and I fell into our usual exhausted sleep, I was awakened by the strangest noise. It was a rattling, sorta, then the sound of fingernails on glass, then a bunch of soft thumpings.

I ignored it. The night was windy, I reasoned. It's probably just that.

But it kept going. Then, because that wasn't enough, there was a weird growly noise, too.

I flung the covers back and tracked it down. The source was one of the windows in our bedroom. Barney was on his hind legs, staring at the closed blind intently.

I went back to my side of the bed for my glasses. I was certain that this would require glasses.

I pulled up the blind and was staring into the beady eyes of a little brown bat, who had gotten himself trapped between the screen and the window.

I will admit that I shrieked, just a little bit. Because, dude, bat near my face. Even if it was on the other side of a pane of glass. 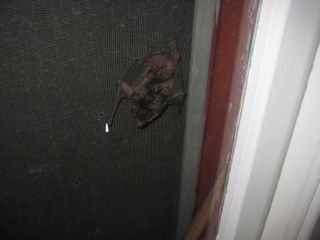 Scott was up by then and trying to figure out what the heck I was doing. We both realized that we had no idea how to free the bat back into the outdoors without a) having to get a ladder and scale the outside of the house at 1 a.m. on a rainy, windy night or b) releasing said bat into our bedroom.

I did what any sane person would do, which is get my camera. 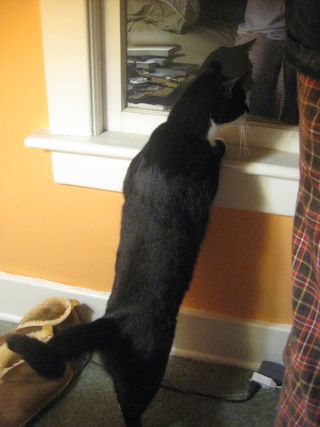 There was hemming. There was hawing. Barney just wanted us to open the damn window already.

Eventually, Scott, who secretly lives for these sorts of problems, came up with a plan that involved two cookie sheets and a bath towel. I closed the bedroom door so that if the bat did wind up in the house, it would be confined. I made sure Barney was on our side of the door. He can be remarkably useful.

I didn't tell Scott that part B of my plan involved diving under the covers and not coming out until the bat was dead.

We moved quickly, cracking the window open enough to get the cookie sheets into the gap, then moving both cookie sheets and window in tandem so that the bat couldn't fly out the bottom of the gap and directly into our faces. When Scott could get his hands on it, he lifted the screen. We shoved the window back down and waited for the bat to release that freedom was just a fall away.

This took longer than expected. Clearly, only the less-than-clever bats wind up in such situations.

Eventually, tho, he flapped away. Barney spent the rest of the night staring at the window. Scott and I went back to bed.

So how was your Friday night?

shameless self-promotion, 322 in a series

From the local almost daily, a celebration of the United Nation's birthday. Sorta.

Obsessive-compulsive disorder runs in his family, Mr. Chabon says, from his grandmother who “washed Dixie cups fresh from the package in soap and hot water,” through his father, who was an “obsessively completist collector” of things like stamps, bubblegum cards and Ovaltine premiums, down to himself, who “can’t stop trying to fix something that’s broken, some lock that won’t open even with the right combination, some computer program that won’t run or channel that won’t TiVo” even if it means staying up till 4 a.m. When he writes, he says, he often rocks back and forth — “like a junkie who needs a fix, a madman on the subway, a devout Jew at prayer,” and “the more easily the words come, the more wildly I rock.”

-- From Michiko Kakutani's review of Chabon's Manhood for Amateurs.

Some days, I rethink the whole concept of being a responsible adult and getting out of bed in the morning. This, almost needles to say, is one of them.

Miss Thing made it until 9 a.m. at school before the nurse called to have me come get her. Maddy doesn't appear to be deathly ill -- although the fact that I have been upstairs and undisturbed for the last two hours is troubling -- but everyone is understandably twitchy. Especially since a local school is closed today because everyone is ill.

The call came just as I walked in the door from dropping Scott off at work because the van is in for routine maintenance. They called him shortly after I got home with Maddy to let him know that it also needs about $1200 worth of work.

The call that followed that one was Scott again, letting me know that the folks who installed the pellet stove, which was here before we moved in, didn't allow enough clearance around the windows, which means our home owners insurance won't cover the place until that defect is removed. Which means either ditching the pellet stove entirely, which would suck because I have grown to love it, or moving it elsewhere at a not insignificant cost.

In the good news dept., now that I'm at the proof stage, I'm actually enjoying reading bits of Quest. Since I'm always my own worst critic, this is a good thing. Also, I finished the M fairy for Maddy's room. Now to get it framed...

So how's your Thursday looking? Any better than mine?

* A cocktail for your Harry Potter-themed Halloween party.

* I can't figure out if this update on the Clue board game is the best thing ever or a sign that something has gone horribly wrong.

* Yet another thing to go see the next time you're in New York.

* The Harper's Weekly Review is especially amusing this week, especially in the last graf.

* I think so many writers also suffer from depression because it's good if you already live with a certain amount of despair and have mechanisms already in place to deal with it.

* It's said that when you have to compare your opponent to Hitler, you've already lost the debate. The same can be true when you compare an unfortunate situation to rape.

* Judith Warner nails it. Sample quote: "This is the cruelty of middle age, I find: just when things have gotten good — really, really, consistently good — I have become aware that they will end."

* Three things that made me laugh hard enough that I scared the cats: the very, very end of this video from "Modern Family;" this Cute Overload post; and this Sarah Haskins Target Women video.

Another Rhinebeck has passed. Still fun, mind, but I noticed a distinct lack of singing/rapping restroom attendants. Maybe I just picked the wrong stalls? Got to see quite a few folk who I only run into once per year but who I blogstalk on a regular basis. I didn't spend much this year. I have enough yarn right now and don't need to acquire mass quantities. I did, however, buy Clara's new book and some Heal My Hands, which is fabulous. As is Clara's new book, natch.

I did have to buy just a *little* yarn, mind. 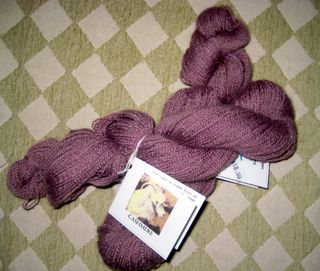 Some Still River Mill pure cashmere, which I think will become a Smoke Ring of some sort, possibly with beads. 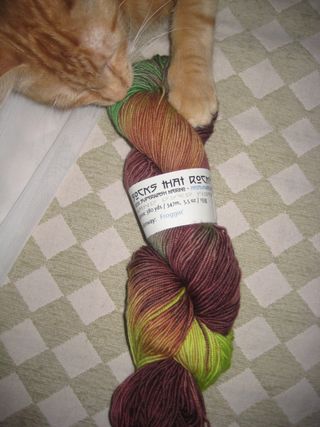 And some Mediumweight Socks that Rock in Froggin', which McGregor has adopted as his own.