And so another Thanksgiving has passed. Turkey was et. The house is pretty much trashed. Fun was had.

The Boy was so wiped out last night - after nearly five days of non-stop movement - he spent the better part of the evening sitting on the couch with me and cuddling his stuffed Paz. This never happens, btw, which is what makes it so bloomin' noteworthy.

Also over the long weekend, I made gnomes. 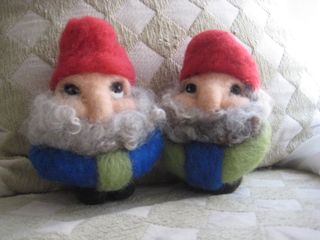 The kit is from Halcyon and the instructions make these an easy afternoon project. Stabbing things repeatedly with needles is always fun, too.

I'm not 100 perfect satisfied with their faces but am still playing with them, in the hopes that they can look more puckish and less psychotic.

This is how Greg spent the best part of the weekend: 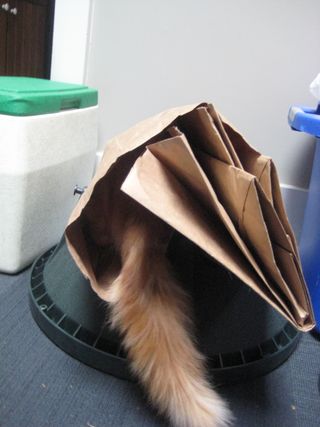 We will be staging an intervention later.

We've spent the last few days doing what Americans do during this time of year, which is eating ourselves silly and generally being thankful for the opportunity to do so.

In addition to that, the Diva spent some times channeling her inner Edie Beale: 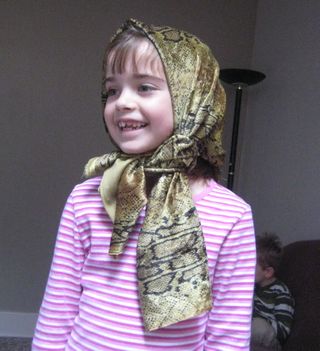 Which I find somewhat alarming, frankly. 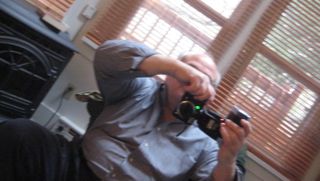 When he wasn't pretending to be Lightening McQueen. 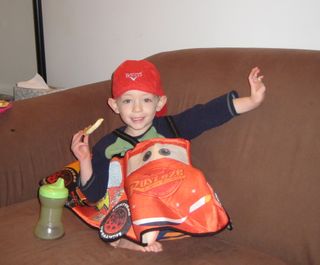 * Want to live longer? Shack up with a smart woman.

* Oh, Paper Source. Why do you torture me so?

* The Featureless Saint sent this piece about overparenting along. The part that slays me is that there are now consultants who will come to your house and teach you how to not overparent. Of course, it can be *really* hard to let go, especially when you lose one of them in the woods. And Ali and I had the same response.

* There is something steampunkish about these ads.

* RuPaul's Drag Race will be back soon! Can. Not. Wait.

* I don't have a link for this but Karen Joy Fowler (whose Wit's End you should read)  has an essay about grief in December's Real Simple magazine. It is very, very good.

* Katha Pollit on Gail Collins' book When Everything Changed. I try to not get to ticked off with women my age and younger who "aren't feminists," yet still do wacky things like have jobs or own property or divorce abusive spouses or wear pants...

This Saturday, I helped shepherd a bunch of Brownies down Main Street for the annual holiday parade. Of course, one of those Brownies was my own. 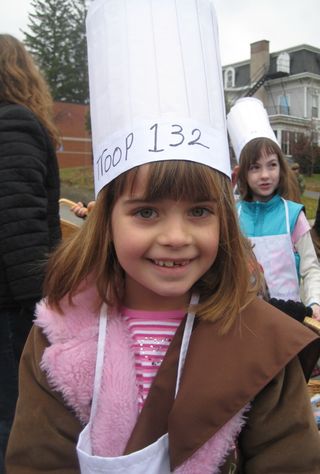 There were dancing Santas. 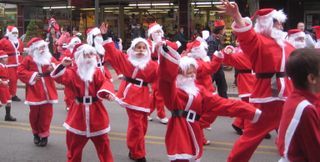 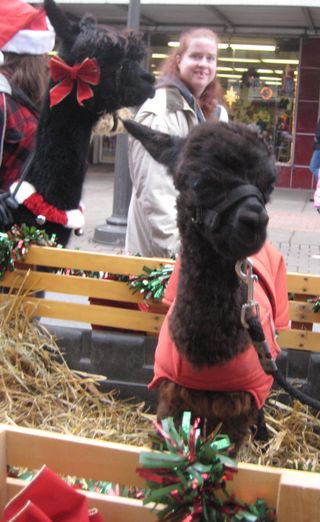 What I mostly saw was this: 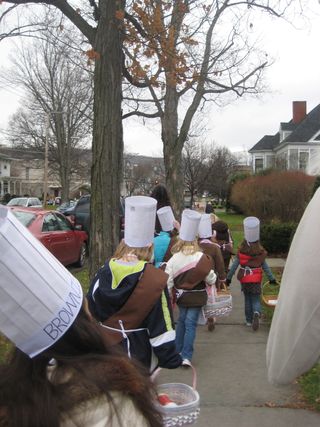 All of the Girl Scouts in the parade were wearing chef's hats and aprons because they were collecting food for the local food bank. I was simply stunned by the amount of canned goods, etc., folks gave us along the parade route. Which tells you something about both my low expectations and the generosity of people in the region.

A fine time was had by all, it seems, even though hot cocoa needed to be applied so that we could feel our fingers again. Which is what you expect in late November but I foolishly failed to bring either gloves or a hot cup of joe to carry with me. Next year.

"Amy could not recall ever having laughed this hard. She did not feel, as the cliche would have it, as though her sides would split, but rather as if something high in front, her breastbone maybe, would buckle, or maybe her heart would just seize up. This was 'hysterical' laughter, and finally experiencing it confirmed her most deeply held belief: that all laughter, except possibly the nervous tittering sort - which was counterfeit, really - stemmed from the same source: an accidental glimpse behind the curtain of denial at the Real Deal, an uncontained porridge of nothingness and stars through which meteors, comets, entire galaxies whiz like shaving-cream pies."

- Jincy Willett, The Writing Class, which is a gorgeous, nuanced-yet-simple book about writers and writing and life. And I seem to be smitten with it.

I've had some time on my hands, which means that I was planted on the couch finishing UFOs while the Boy watched Spongebob. And, so, Multnomah: 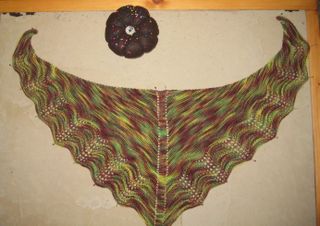 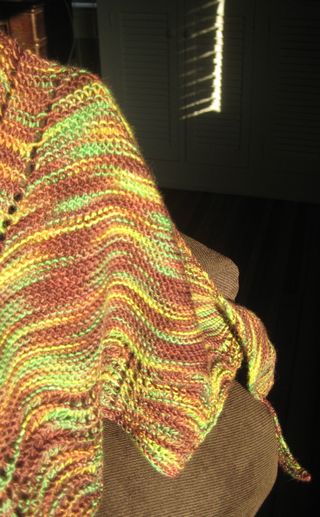 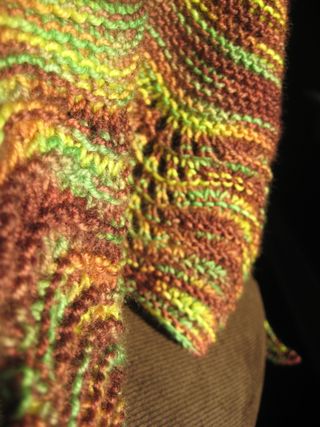 My helper during the art shots: 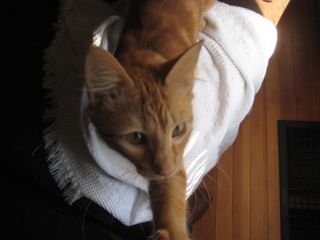 The deets: Blue Moon Fiber Arts Socks that Rock Mediumweight in Froggin purchased from The Fold at Rhinebeck 2009. Size 5 needles. Took maybe two weeks to knit? Something like that. Quickish and satisfying.

On a completely different note, I'd usually save this for a many things post but I'm not certain how long the link will work. The River Valley guy is placing his ads in the local almost-daily again. I was worried about him. Nice to know he's still f'king that chicken....

shameless self-promotion, 325 in a series

Paintfest! It's quickly becoming a can't-miss event for those of us with kids. My kids missed it this year because they were lying on the couch being pathetic and ill. But, still, can't miss if you're not contagious.

In related news, the Boy is more or less back to normal. And now that I've typed this, he'll start running a high temp again and have a mandatory 24 break from preschool. Because that's just how it goes. I am feverishly trying to get some things accomplished during this window, however. I don't know how long it will stay open. Who will be next? Anyone care to place a bet?

Update from the plague house: The Diva is back in school and more or less OK. The Boy is well enough to be a pain in the arse because he's bored but not ready yet to do much. Scott sounds like a phlegmy Barry White. I appear to be well and will now go knock every wooden thing I can find.

So the many things, which aren't as many as usual because I haven't been at my desk all that much during the last few days.

* I can't remember if I've ever mentioned my great love for underground mass transit systems. If not, let me make my love official. I'd rather ride the Tube than in a cab. I'd rather take the Subway than the bus. It's not just the underground train part that appeals, it's also the art. Thanks to this bit of the NY Transit site, I now have a list of stations to visit. That's totally normal, right?

* Pink it and shrink it. "Computer cologne?"

* A good friend of ours (who we visit yearly, at the least) lies near Bath, ME, which is just up the road from Freeport. We almost always wind up stopping in Freeport on our way to or from but never quite know what to do, other than hit LL Bean. Now we know.

* Mostly for Doula K but good for any Austen fan, I think.

* If you need a laugh: "It's like Ethan Allen shoving his bait and tackle in your face."

* Brustian wisdom. It took almost three years of living in the South before I realized that particular phrase was an insult.

* It makes you wonder if the aftercare worker would have said the same thing to E's dad.

The Diva got something suspiciously flu-like on Thursday. On Saturday, the Boy officially had it, too. At least they have staggered the sick, which makes it slightly easier to deal with.

While illness has plenty of downside, there has also been upside. I've been getting some neglected projects finished-finished, rather than just chunked in a heap on my sewing machine table. 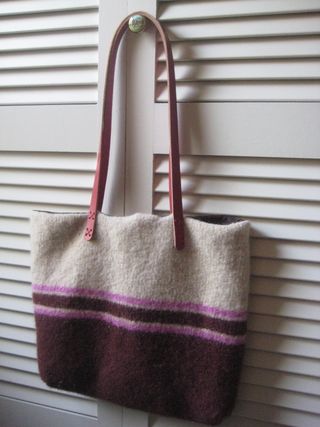 I'd felted this bag years ago - pre-blog, in fact - but could never find straps that satisfied me. I used grommets at one point to attach some far too thin straps but both straps and grommets kept pulling out, which left big ugly holes. So I stored the whole thing on the shelf of shame.

This past Rhinebeck, however, I stumbled onto Homestead Heirlooms' booth and, well, heard a choir of angels singing hosannahs. That could also have been the sheer amount of coffee I had had, coupled with the wool fumes.

Still, their kitted up straps with buttons and waxed twine are a work of genius. And while I was at it, I cut off the ripped-up top of the bag and lined the whole thing with a fabric scrap: 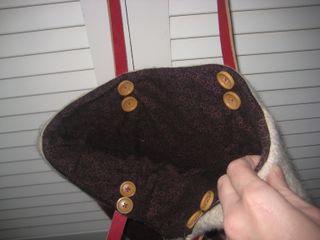 It's nice when it all comes together, even if it takes a half-decade.

Also finished-finished is the "M:" 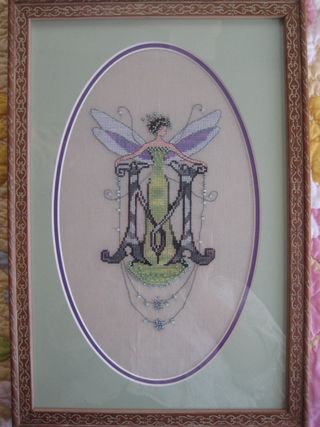 A close-up of the beading: 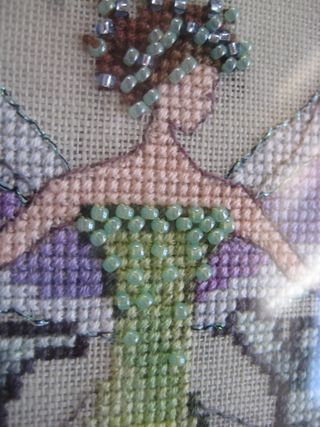 Ms Thing seems to love it. It's so hard to tell with her. You always know when she *doesn't* like something - but it can be hard to puzzle out if she likes something. I'm pleased with how it turned out. So there's that.

Back to tending the Boy, who, despite being feverish, won't stop talking. Sick days would be so much more fun if I could get just a few seconds of blessed quiet.