qotd, that's what she said

I am not easily impressed by snow. However. The past 24 hours have made even the most jaded Northeastern say, "whoa." We've been saying other things about it, too, but I won't repeat them.

By way of example, I whipped out the snow penguin. Those who remember the snow giraffe should take a minute of silence in his honor. 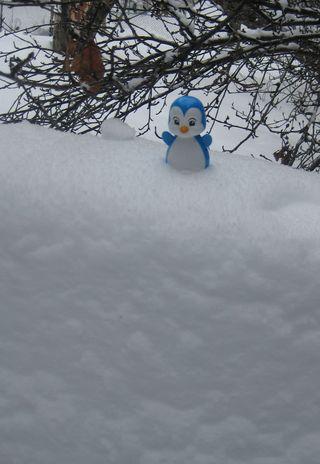 This is the penguin on top of the snow in our backyard. 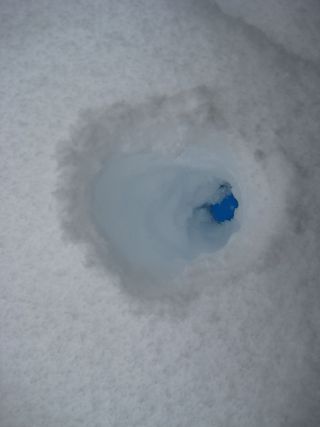 This is the snow penguin pushed into the snow up to my elbow. He could have gone another foot but I didn't want that much snow in my sleeve.

Put another way. This is where I was standing to take the picture: 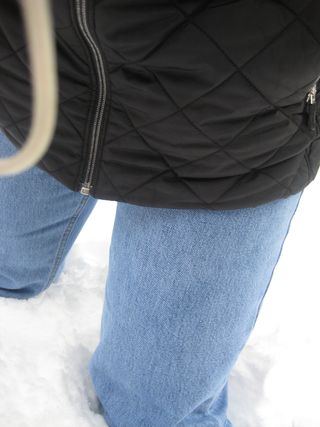 I am in up to my knees. And, no, I'm not in a drift or where we tossed what we shoveled. This is the average.

Maybe this will give a better idea. This was the crabapple tree in our backyard:

And now let us have a moment of silence for the tree. It was a good tree and I will miss it.

We are now on Day Two of snow days. Hopefully we will make it through the weekend without burying one of the children in the snow, where he or she will be forced to stay until a thaw.

Have you entered the Sweepstakes yet?

Leaving aside all of the drama about her Evelyn and Evelyn project, about which I personally have little opinion, this quote from Amanda Fucking Palmer is golden:

"as far as people hurling the criticism that i am “hiding behind my art”….(this one has come up several times)

THAT, my friends, is hiding behind art."

memories. light the corner of a mind.

Moorcock was my first real, big deal, big girl interview. Photographer Kenny Braun and I drove out to Bastrop in my ancient Ford Escort. We were both almost giddy. That could have been a side effect of the ancient Ford Escort not having decent air conditioning and we were driving through Texas in late August. I think it was more a result of knowing who we were going to talk to.

Despite having excellent directions, we couldn't find Moorcock's house. Or, rather, couldn't believe that the house we found was Moorcock's, given how unassuming it was. His wife* invited us in but warned that we couldn't stay long because he wasn't feeling well. We wound up being there for almost two hours, which is a long time for this sort of thing.

Once we got talking, it was hard to stop. Kenny snapped pictures the whole time. At some point, when she came in to check on us, Moorcock's wife offered drinks. To this day, the taste of creme soda never fails to bring back that afternoon.

We kept trying to leave, mind, because we were both fundamentally polite people who understand that this man needed to conserve his health for things more important than talking to us. I don't say that in a sarcastic of self-deprecating way. Time is finite.

But one topic led to another. Then we were getting a tour of the house. And of the library, which still gives me goosebumps just to think about. Moorcock's wife kept reminding him to wrap it up. Kenny and I kept shooting each other "how lucky are we?" looks. I don't know whether Moorcock was trying to avoid writing or another tedious task or if we just wound up in the right place at the right time. Regardless, it was a slice of magic.

My raw notes and recording from that day are somewhere in a great computer graveyard. I have vague memories of putting them on a old school 5" floppy disk, which I no longer have the technology to run, even if I hadn't thrown it away three moves ago.

The Austin Chronicle (long may she wave) still has it online, tho. And this quote still tickles me:

MM: You look at all of the writers who are prolific, and it's basically genes. It's all it is. It's solid, peasant genes. They haven't been touched by anything. I've got a picture of my great-grandfather (points to it) and you look at his hands and it looks like they've just been smashed. He lived forever and my father is still hale and hearty. I think that's all it is, just sheer luck. The right genes fitting into place and bam, off you go. You might as well be behind a mule team but you're not, you're actually writing books.

AC: Which sometimes feels like being right behind a mule team.

Thanks again, Mr Moorcock, for everything.

* I'm pretty sure her name is Linda. Not sure I'd bet on that, however.

Also: have you entered the sweepstakes yet? You could win yarn...

The fine folk in the Simon and Schuster publicity department have whipped up a sweepstakes.

Enter the Sweater Quest drawing here. The grand prize is a $250 gift certificate to your local yarn store. Just think of what lovelies you could take home with that in your pocket.

That's a lot of cashmere, is what I'm saying.

Also, you can win a copy of the book and, as a lagniappe, a little knitted something-or-other made from the leftover yarn of my one, true sweater.

Spread the word far and wide!

Also in the excellent news category:

I have held an actual copy in my hand. Here it is, cunningly modeled by the Greg: 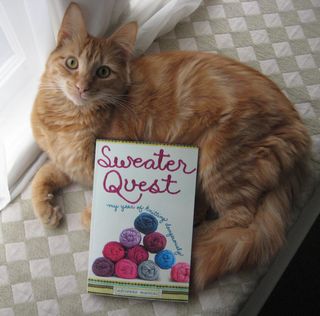 His excitement is hard to contain. As is mine.

* Curling condoms. Yes, you did read that correctly.

* Oh, Heather Ross. Just when I think I'm over my fabric problem, you pull me back in.

* Peter Sagal's theory on kids and entropy could not be more right. My vacuum, however, has no balls.

* See? The Oatmeal agrees with me about talking on the phone.

ETA: I lived in Knoxville for almost six years and never once saw a Sunsphere tchotchke. Hrumph. Next time I'm in town I'm buying a dozen of them.

After a week with the Diva home on a week's "spring"* break, I was looking forward to my own "spring" break, which is this week. I'll lounge, I thought. I'll watch the Olympics and knit. I'll catch up on all of my reading. It'll be fabulous.

You know how this ends, right?

My body took one look at my week of relatively little that absolutely had to be done and celebrated by picking up the dread snotty lurgy that the kids have been swapping back and forth. Hoo-ray.

It could be worse. I know. Still, so much for getting things done.

* Spring won't be here for another six months, at least. At which point it won't so much be "spring" as "warmish mud" season. I'm a big fan of Upstate New York's summers, falls and winters but spring can suck it.

qotd, on the olympics

"I stopped feeling jaded from the moment we approached the ski jump and I spotted a tiny dot sliding down a huge ramp. The dot separated from the end of the ramp and floated out over the mountain. Floated and floated, and each time I thought that surely it must come down it just kept on floating. I've watched ski jumps on TV, but the footage somehow doesn't capture the utter defiance of physics taking place. Put it this way: I involuntarily held my breath for the duration of each ski jump I witnessed in person. I do not hold my breath when I watch a ski jump on TV."

-- From Seth Stevenson's dispatch from the Vancouver games. (His dispatch on the snowboard cross and curling (two of my favorite winter sports) is equally awesome. Also awesome were the Danish curling women's uniforms. I want to live a life where I can wear that everyday.)

shameless self-promotion, 330 in a series

From Locus magazine: a review of Connie Willis' Blackout, which I recommend you all pick up.

because all dogs need sparkly skirts

We are deep in both the winter and the President's Week holiday. Which means that it is time to break out the crafts.

Yesterday, Maddy and I tackled the Project Runway dog design kit * that she'd gotten for Christmas. Rather, she did the bulk of the work. I was merely on hand to cut fabric because a) we had no lefty scissors that were sharp and b) in her opinion, I'm better at the menial work while she is best at adding the sparkles. She is correct.

Fun was had. As was a mess. 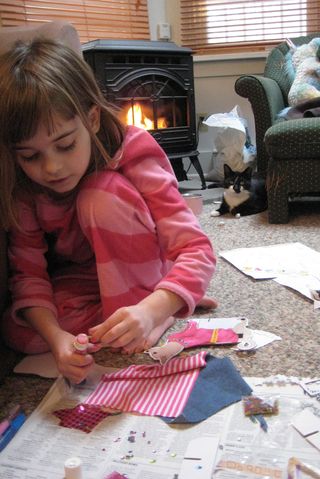 Note that Barney is in his official winter position, which is parked in front of the pellet stove. Because generating your own body heat is so *hard.* 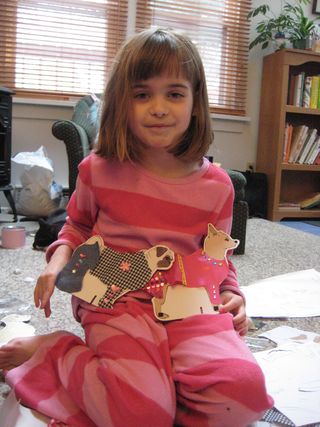 Right before I took this picture, M asked if I was going to put it on my blog. There was eye rolling.

I'm not sure what to make of our exchange, other than to think that the days of her not caring about what her mom does are numbered. And rightly so, given that she gets to have privacy if she wants it. Enjoy pixs of her while you can, friends. I suspect we're about to enter a whole new phase.

* We also watched Monday night's WKC show, which I'd recorded. M viewed it as an audition tape for a future dog.

* My day just got a little bit brighter. Also, the lovely Ms Pandora Boxx lives in the Hub's hometown. Maybe we can catch one of her shows...

* Reminder: Your vagina is not OK. Related: this might be the best gift ever.

* I can't wait to see how the Picture Book Report develops. Plus, Daniel Krall, who has illustrated some of my stories/reviews for the Baltimore City Paper, is involved, which makes it a double-win.

* Note to self: Spend more time in caves.

* Two stories that I'm putting here so that I remember to read them later: DIY Genetic Engineering and "How Christian Were the Founding Fathers?"

* Bitch, PhD writes one hell of a rant. That sound you hear is me, applauding.

* Stories like this one remind me how privileged I am to live in a developed country and that make me wish there was more that I could do to aid in such easy-to-solve situations.

* I couldn't quite put my finger on what the skaters in the Olympic Opening Ceremonies reminded my of. Fortunately, io9 figured it out for me.

The Boy got his hands on my camera again. 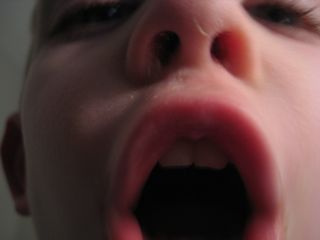 I have a feeling this week may be very interesting indeed.