ETA: Katie has taken her blog down for the time being. Which is understandable. If you want to do something tangible to help out the Granju family during this time, please consider Shane's reasonable proposal.

shameless self-promotion, 334 in a series

From the local almost daily: About the cheese and its color.

"It's a difficult thing to explain, made more difficult still by a phenomenon I've noticed many times since starting work here: it turns out it's very hard for people to listen clearly to a woman holding a butcher knife."

I'm kinda between here and there for the next few days so updates will be slim, if not nonexistent. Philadelphia has been swell, tho, if really warm, which is exactly the sort of weather where one wants to pull out a big wool sweater and talk about one's love for it.

I drove to the BING! yesterday to chat with Bill Jaker about Sweater Quest. The podcast version is here. A fine time was had by all.

And, of course, I made him pose with Mary Tudor. His eyes are usually open, fwiw. 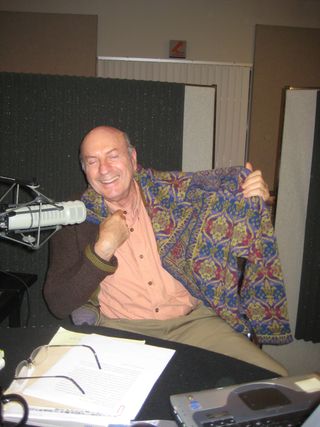 The sweater he's wearing was knitted by his mom and sister while Bill was in college. You can really just feel the love that went into it. What the picture doesn't make clear is that it was 80 degrees yesterday, which made wearing a wool sweater an act of bravery.

* If you choose to reject evolution, you should also reject germ theory.

* Bill Bryson has a new book coming out! So does Mary Roach! And there was much rejoicing.

* Full disclosure: I know the anthropologist who wrote this post about the political economy of craft fairly well. Still, I think it's an interesting idea to kick around.

* The Readercon programs are up! I'm excited to be going, if only to check out "David Foster Wallace wanted us to do This Panel: Authoritativeness in Fiction" and/or "Everybody Loves Dirigibles: Science for Tomorrow's Fiction."

* Scott and I always mock threaten the children with natto when they won't eat. Now it looks like we could do it for real. *shudder*

* On mothers, knitting and gay men. Read the excerpt. Prepare to giggle.

* Two from Boing Boing: What the Disney princesses teach girls and why you should care about four rare earth elements.

some weekends, the bear eats you

On Friday night, given that it is finally frozen dessert season, I went to get ice cream out of the freezer. What greeted me was not a lovely creamy confection but a waxed paper carton full of soup. Why is it that refrigerators only seem to fail in warm months?

Anyhoo, what followed was much wailing and gnashing of teeth. Which was then followed by a trip to Lowe's - because who doesn't like buying a major appliance under time pressure? Which is why I now have a new refrigerator in the kitchen.

And that was pretty much my weekend. Exciting, no?

There was also the occasion of the Diva's first successful sleep-over at a friend's house. It is a new era, one that I'm not entirely comfortable with, because it's hard to believe we're already here. Next thing you know she'll be in college.

Today will be spent dealing with a lingering writing deadline so that I can run to Binghamton tomorrow for WSKG's Off the Page. Please tune in - or catch the podcast later.

Today will also be spent stepping over McGregor, who has decided that the best place to sleep is at the top of the stairs. 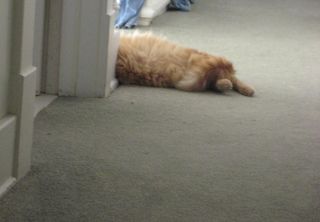 His head is dangling off of the top step in this picture. Weirdo.

Oh - and today will also be spent trying to not play Sushi Cat. Mmmmm. Tsunami roll ...

"'Multiple exclamation marks,' he went on, shaking his head, 'are a sure sign of a diseased mind.'"

- Faust Eric by Terry Pratchett, which I listened to on my road trip yesterday.

Quickly, quickly, for I must go fetch my children, since getting back from Troy took a little bit longer than I'd expected because while I did remember to take my camera, I did not remember to pack it up when I was leaving and had to double back. *sigh*

A few knitters (and crocheters) of Troy (or, technically, Brunswick) : 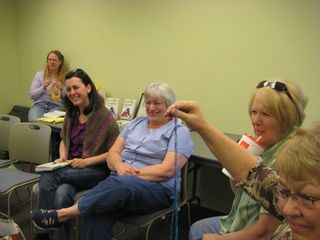 And there was cake! Didn't get a picture - but it was very, very good. Thanks for having me - and I hope I've inspired at least one more knitter to take the plunge.

In other news, I've started a new Fair Isle project... 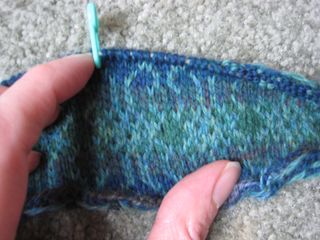 In other other news, a reminder: I'll be in Philly next Wednesday, May 26, at the Tangled Web from 5-7 and at the Philly Fiberists meeting on Thursday from 7-10pm. Come on out and fondle my sweater.

Must fly, lest they think they've been abandoned...

advertising is the mirror of a community's soul

Quick reminder: I'll be at the Brunswick Community Library in Troy, NY, at 10:30 tomorrow morning showing off my sweater. I hear there will be cake.

I found this ad in the almost-daily's classified section this morning. It made me smile. 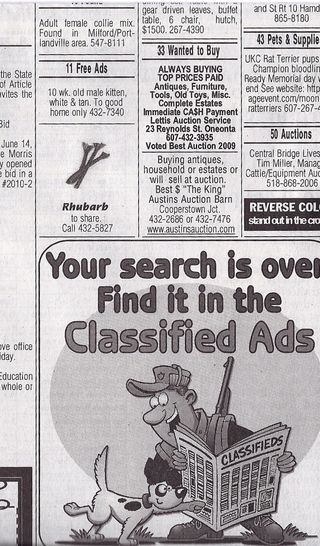 I wonder if he or she will also place an ad in late summer with zucchini to share? 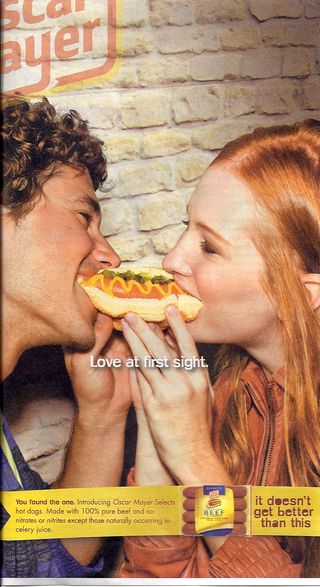 I'm tempted to mail the it to Jean Kilbourne, whose videos I force my COMM 100 classes to watch, to see what she would make of it.

And, finally, this ad for a product whose existence proves that idle hands may not be the devil's workshop but are the root cause of so many objects of dubious utility.

* Trucking statistics may be the best economic indicator. Also I offer this as further proof that economists get excited about odd things.

* I'm trying to convince myself that I don't need one of these.

* Further proof that Wonder Bread is not food.

* I can't find a link to the stories themselves there are two excellent stories in the June 2010 Real Simple: Jancee Dunn's Life Lessons column (in which she talks about lessons she learned from her Dad (including "Carry a Hanky")) and See How They Grow (which is about the Wonder Weeders in Woodstock (and, no, the first sort of weed you'd associate with Woodstock is not the focus of the story.))

* Can anyone help Mike out?

* Deb needs a new liver. Deb's friends and family are auctioning off stuff for Deb's new liver. And some of the stuff is amazingly great if you like books and/or baked goods. Please go bid.

* I think Colourlovers is a fabulous site. I'm just not sure what to do with it. Sure is pretty, tho.

* You know it's a trend with legs when the make-your-own jewelry books come out.

* Kids hate vegetables, even in Berkeley.

* A reminder of what the antecedent of "she" usually is.