The idea of tubular dinner came about because I wanted tamales and the Pie Goddess wanted summer rolls. And so a theme was born.

In keeping with the motif, the kids spent time playing with various handheld devices that use that series of tubes otherwise known as the internet. 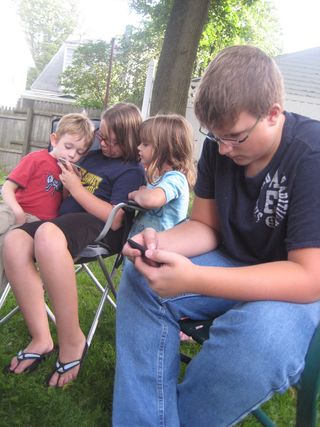 The adults had tubes of what tasted like uncut Windex. 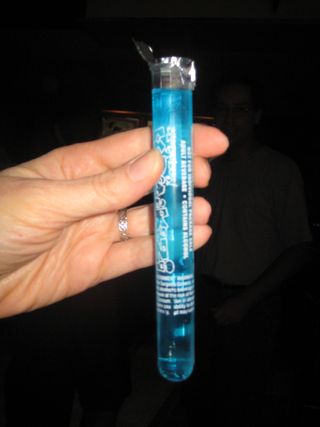 For actual eats, the kids had hot dogs, cheesy puffy tubes and watermelon.* 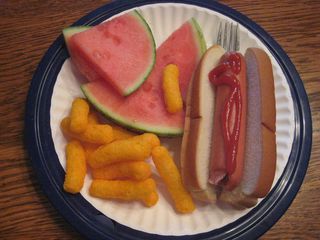 The adults had summer rolls and peanut sauce, which I made, tamales, which were divine and prepared by the Pie Goddess, and fancy sausages. There was also non-tubular Shiner Bock beer, which the Grill Master smuggled from Iowa for us because you can't find it in this part of New York state. Which makes us all very sad indeed. 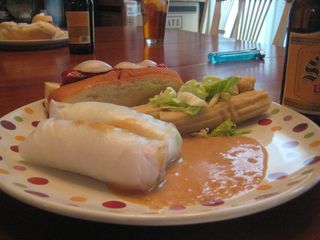 And for dessert, pumpkin roll.** 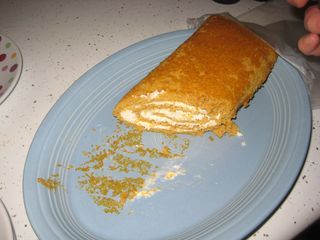 * Technically, it no longer looks like a tube once you slice it. Pragmatically, I had a watermelon in the kitchen that needed to be eaten, theme or no theme.

** Technically, orange winter squash roll, since my grocery didn't have any canned pumpkin. Tasted exactly the same because it's not about the pumpkin, really, but the cinnamon and nutmeg and orange.

Shiner Bock. I knew I liked you.

Cool idea! We haven't had a combined families dinner with friends in awhile and I miss it, theme or no theme.

Mmmm...Shiner. I miss being just down the road from the brewery.

Yeah, what's with no pumpkin?

We had the same nopumpkin problem last year. I think I'll just start hoarding it.