shameless self-promotion, 344 in a series + a recommendation and a picture

The shameless self-promo: A review of Scott Phillips' Rut from Locus. Most of the columns I write for Locus the magazine aren't online - so I thought I'd link to one that is. Also, I find the concept of this book's publication fascinating.

The recommendation: Go get yourself a copy of Jo Walton's Among Others and read it. I am over the moon about this book. I'd like to say more but a) I can't think of enough superlatives and b) I can't fully describe it, for reasons you'll understand once you read it. Which you should do.

The picture: Deb at The Woolery sent some pictures along from my trip there. They were a lovely memento for a lovely trip. This one, however, gave me pause. What the heck were we doing? 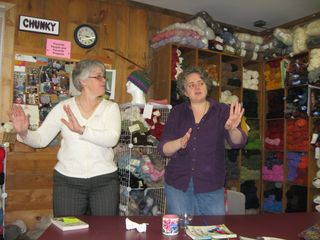 "The answer to why we bought the Beekman could fill the entire paper. Because we wanted a place to get away from the city. Because we wanted to grow our own food. Because the place looks like it belongs on the cover of a magazine, and we wanted a life that looked like the cover of a magazine. Because no one else in the area had the means to take care of such a high-maintenance historic building, and it seemed like a generous task to take on. Because I'm turning 40 next year and wanted something to show for it. Because we're vain, kindhearted, ambitious, shallow, deep, humble, trendy, old-fashioned, rich, poor, proud, and vulnerable. Those are merely the beginning of the reasons we bought the Beekman.

"But those are too many words for the reporter. She only needs one truth for the article. So we pick the one that sparkles most.

"We bought the Beekman to return to a simpler life.

"Truth isn't beauty. It isn't even always true. Truth is nothing more than consistency of message.

"I learned that from advertising."

-- Josh Kilmer-Purcell, The Bucolic Plague, which I strongly recommend, both as an interesting story and as a meditation on how to build stories.

and, lo, it is finished

Fresh from the wash/dry cycle, I give you Greenway. 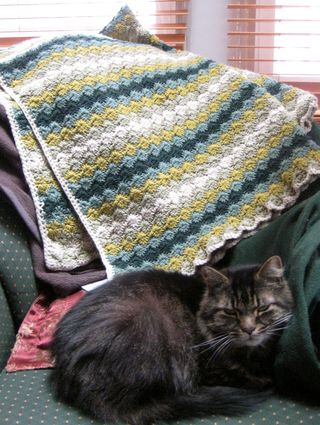 Also pictured is our elderly cat Trout. He'd like you to know he's very cold and very tired and that I will do nothing about either of those things because I am mean. 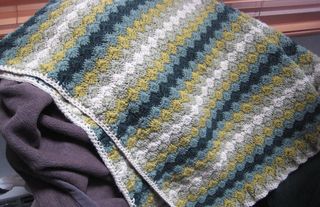 I didn't think I'd finish it so soon after complaining that I'd never finish it. In truth, I simply ran out of one of the yarns and took it as a sign from the universe that it was time to be done with this now. It's plenty big enough to use as a lap blanket, which is all I wanted.

As I was crocheting it, I kept wondering why the designers hadn't switched the yellowy green and the sagey green, given their relative color values. That would be even more beautiful, I thought. Then, as I was finishing the edging and looked at the picture in the book again, I realized that they had done that. I just screwed up when I started.

Will this cause me to rip it all out and do it again? No, because while I may have some OCD tendencies, I am not completely crazy. I like it just fine like this, thanks. 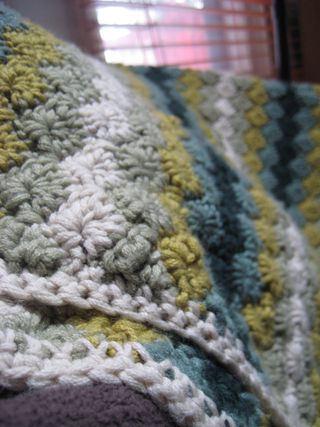 I'll let you know how it holds up in a house with cats and kids and adults who spill.

I also have my next big knitting project ready to go. Alice's Aran book is involved. More on that later.

up with figs, Medusa of the Passport Line 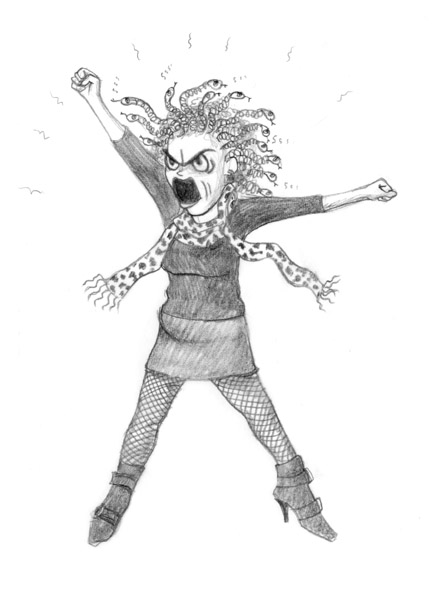 I was in line with her at passport control after a ten hour flight. Which is not when you want to run into the most irritated woman in the world.

She was wearing high heeled boots and fishnet tights, both black. Ditto her short skirt and tight top, which both acted like cotton/poly sausage casings. Animal prints were involved. Her dark hair was a mass of snarly cockscrews; her face looked like a dried apple face, the kind we made in second grade one October.

If she weren’t screaming at the passport clerk so loudly, she would have been small enough to fold into my carry-on. But I don’t need another screaming thing in my life. I’m full up.

“Lady,” I wanted to say. “You know these guys have guns, right?”

But no one responded. Openly, anyway. We looked away, exhausted after hours in a metal tube being hurtled through the sky. And we collected our documents and went home.

It appears that it's just going to be one of those Januarys. First the flu, then bronchitis, now a stomach bug. I might need to have myself fumigated.

The many things, while I buy mass quantities of Lysol:

* On exercise gurus and leg warmers.

* This has been floating around for a bit but I failed to watch it so here it is now: Rufus Griscom and Alisa Volkman (who I briefly worked for) talk parenting taboos.

* This will make you wish you had a better nickname.

* More than you ever wanted to know about cats and their colors. (We have a red tabby, #5 bicolor and a, um, Trout, who doesn't appear on the chart, as far as I can tell.)

* I still want to know where all the women are at the highbrow mags.

* Your house is on fire.

* On the Princess industrial complex. (HT to Nerak)

It was cold enough this morning that the thermometer - the remote unit is outside - gave up even trying to display it. Once we get below -9 (F), it can't cope. Neither can I, come to think of it. 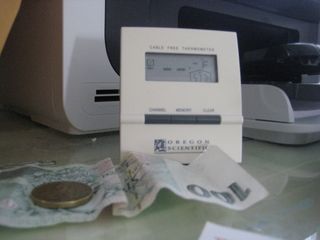 In front of the thermometer is 120 Czech korunas, which is worth about $6. I hope the Czechs never do switch to the Euro, if only because their current currency is so pretty. 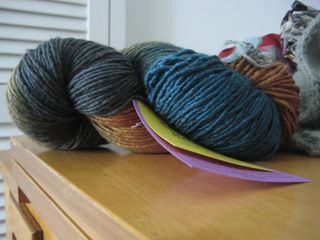 So last week I had to drive to Seneca Falls for a story. More on that later. But on my way up 96, I drove past a big sign that said "Yarn Sale." I dropped in on my way back home. Not only was it a sale, it was the warehouse/workshop for Schaefer Yarns. Who knew?* I couldn't resist this skein of Helene in "Elizabeth Zimmermann." Now I need to figure out what to do with it. Thoughts? 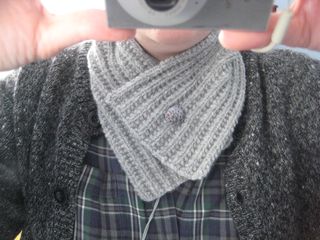 Also, I managed to attache the button to the Fear of Committment Cowl. 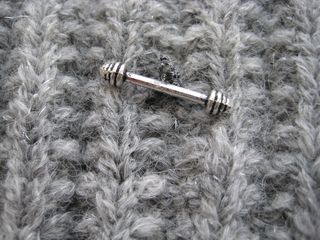 The back. The toggle slips into two stitches and holds the whole thing shut. 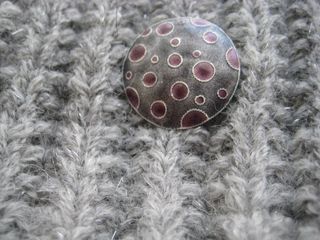 The front. Thanks for all of the button input. You were right.

* I suspect some of you knew. I didn't know, which is my own fault, yes, but made driving past the place all that much more exciting. Yes, I am easily excited.

"By and large, people don't like to live in the realm of 'not knowing.' It's terrifying. Which is why everybody wants to have all of the answers. Atheists think science has all the answers. Religious fundamentalists believe that their particular theology does. But 'not knowing' is a richer and more gratifying place to be. I have no idea what's going to happen to me, why the universe is the way it is, or what will happen to my life force once my body stops working. You probably don't, either. So just breathe and live in the great, beautiful mystery. And floss regularly."

For those of you wondering, work on the Greenway afghan continues. 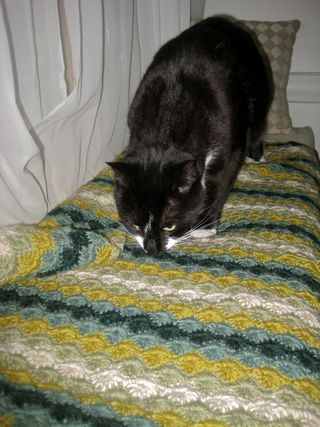 I've reached the point where I feel that I will never, ever be finished with it, that I will drag this uncompleted afghan with me to the grave. 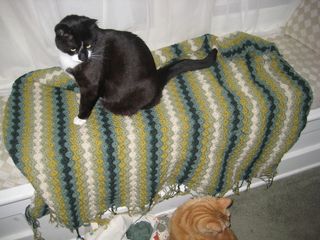 I'm tempted to let the cats just destroy it, because that seems to be what they want to do.

And, still, I crochet on, without cease and without end. 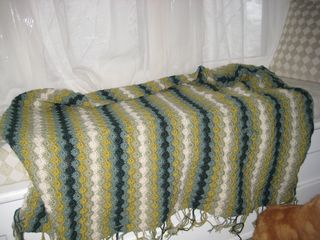 Despite the hazards of daily life, the unfinished afghan remains.

up with figs, royal wedding hat 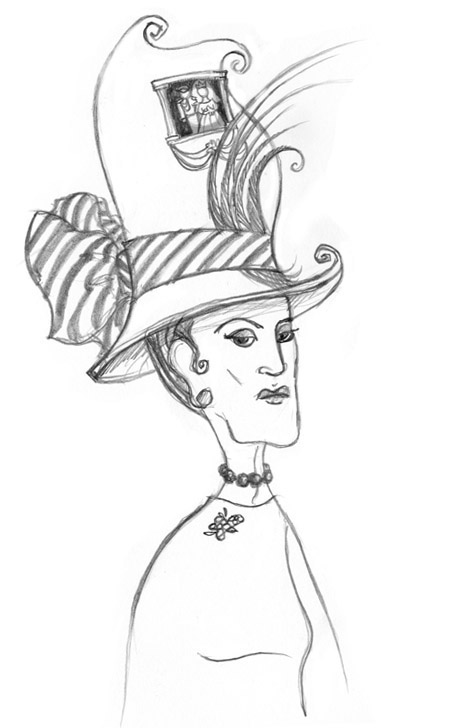 Marie Antoinette, who was known for her massive headgear that could contain entire sea battles, would weep from the  sheer scale that Lady F-W will achieve. Provided, Marie still had a head from which to weep.

Still, it would be quite a hat, provided she could get the clockwork figures of the groom and his bride to chase each other around the brim, like a modern day millenary cuckoo clock. And the firework display - or, rather, the fireproofing of the rest of her garments - was almost dialed in.

Now all she needed was the invite, which she was certain had simply gotten lost in the mails. It’s absence mattered not one whit to Lady Featheringston-Wittengham. Her hat was a hat of destiny and would not be denied.

I'm not sure if we're in the throes of an ice storm or a snow storm. Suffice to say, it has thrown a wrench in my plans, whatever it is. My kids need to go back school before they kill each other. So, a shorter list, while I go referee:

* I mocked our Salad Shooter when it turned up as a wedding gift. Turns out, it was on of the best gifts ever, at least in terms of cost/use. I loved it; then it died and I couldn't find another one. And now I know that they still exist. Mock on, mockers. My Salad Shooter and I don't care.

* This yarn/knitting blog may just be my new addiction.

* Did I need an article to tell me this: Moms Lie to Other Moms?

* I'd forgotten that The Amazing Race did a couple of challenges in Prague.

* The difference between "imposing" and "leaning on each other." For the record, I approve of Lenore and her Free-Range philosophies. Not that my approval matters, mind.

* I also approve of patterns named after Madeleine L'Engle characters.

* Eight small investments that would help the planet most.