nothing to see here

You know how every now and again every last thing you try to do ends up taking 40 percent longer than anticipated? That would be today. Therefore, this post, which isn't the one I'd intended but there isn't enough light to take a picture and it would take 3 hours to upload it anyway. And since I have to take the kids to swimming lessons in about 40 minutes, that would be a problem.

So - some brief, picture-less thoughts:

- Thanks so much for the comments on the podcast. I will work on the echo and the formality. Yes, my anxiety about the whole process comes through but I hope to loosen up over time. Or I'll just start doing shots of tequila beforehand. Whichever.

- Thanks, too, for the comments on bathrooms. It's enough to make one never want to travel ever again. Ever.

- I'm going to send out a newsletter by the end of the week, so if'n you want one in your in-box, sign up here.

- While my love for James Franco remains undiminished, he should not ever consider taking the Oscar hosting job ever again. And pink is not his color.

- Courtesy of Juno, your word for the day. You're welcome.

qotd, on bathrooms and expectations

"What I have to say next concerns the Omsk airport men's room. I regret this. I've noticed that in books by Siberian travelers of the past they don't talk about bathrooms, and that's probably good. I relectantly break with tradition for two reasons. First, I am an American, and Americans pay attention to and care about bathrooms. The habit may show childishness and weak-mindedness, but there it is. Second, if the world really is going to become a global community, then some of our trading partners (I'm talking to you, too, China) need to know how far apart we are on the subject of bathrooms."

This is what I looked at most of yesterday afternoon. 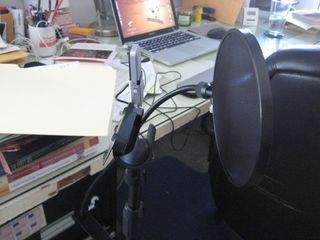 As a result, I think I have a podcast version of the first wee bit of the book ready to go. The first installment is here.

I decided to start small, simply because it's easier to correct errors in a shorter podcast than a big one. My knowledge of the technology is still a little shaky. I'm no longer in the hitting-it-with-a-stick territory but am not yet to the my-touch-is-swift-subtle-and-magical state.

Eventually, once the whole book is recorded, I'll stitch all of the podcasts together to make one dowloadable file. It's good to have dreams.

For the forseeable future, expect podcasts once a week or so. I'll also be adding in audio footnotes and answering questions. Think of it as the Sweater Quest Director's Cut.

Please, please, comment on any problems. Don't be shy. 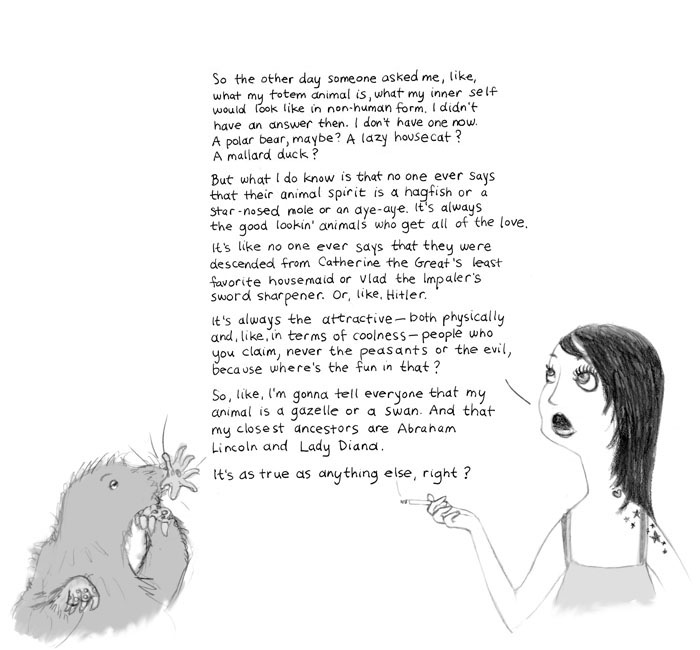 * We didn't have much luck with probiotics when the Boy was wee but ymmv.

* While I know this is how you win kid food battles, it goes against my nature.

* I have the same problem with Parenthood. I still watch it every week, tho it hurts a bit sometimes.

* This story about the socks in True Grit makes me happy.

* Why isn't Wall Street in jail?

* How to get Ellen Kushner's Witches of Lublin (which the vocal talents of Neil Gaiman, Simon Jones, Barbara Rosenblat and Tovah Feldshuh) on your PBS station.

the airing of the stash and shameless self-promotion

My Spring and Summer is starting to fill up, which is awesome. For your planning purposes (and because I'd like to meet you), I'll be at:

- The Samaritan Endicott's Meet the Writer's event on April 30.

- In Houston, TX, on July 9 at the Knit at Night Guild Luncheon.

Woo! It's always nice to get out of the house and meet other knitters.

The kids are up with the grandparents this week, which is ... weird. This is the first time they're both been gone simultaneously.  Scott and I actually watched all of The Social Network* in one sitting without being interrupted. I can only tell you how amazing that is.

This week I plan to do a bunch of chores that I never get to when they are underfoot. Yesterday, inspired by Juno, I aired the stash. 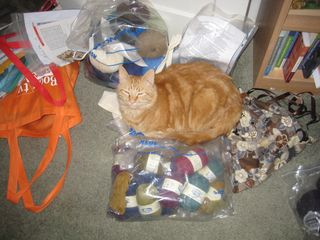 McGregor helped by holding it down and making sure it didn't escape.

It has now been cataloged, photographed and logged on Ravelry. If you are the sort who needs more yarn, look it over and we can talk.

I also unearthed a doomed project, which I show you in order to prove that I make all kinds of mistakes. 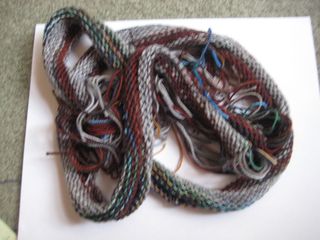 It's this blurry in real life, too. It was supposed to be a scarf. The colors weren't working. It wouldn't stop rolling. Ergo: it is dead and the  yarn has been restashed. Ah, well.

Today I'm moving on to sorting out the kids' closets. Wish me luck.

He got it, he says, on one of his business trips to the Ministry of Tourism. “This is the secret of success for anywhere in the world, not just the monastery,” he says, and then goes on to describe pretty much word for word the first rule of improvisational comedy, or for that matter any successful collaborative enterprise. Take whatever is thrown at you and build upon it. “Yes … and” rather than “No … but.” “The idiot is bound by his pride,” he says. “It always has to be his way. This is also true of the person who is deceptive or doing things wrong: he always tries to justify himself. A person who is bright in regard to his spiritual life is humble. He accepts what others tell him—criticism, ideas—and he works with them.”

--- From Michael Lewis' Vanity Fair piece Beware of Greeks Bearing Bonds. I'm on a Lewis kick. I'm sure it will pass - but this is an amazing look at both the culture and what went wrong.

on bags and cables

The Boy was sent home from school yesterday, not because he was being extra naughty, which could totally happen, but because he was under the weather. The quick strep test was negative but we await results of the not-quick test. He seems pretty dang happy for someone who's really, really sick, however, so we'll see.

The fact that he's home, tho, has given me some time to work on St. Ciaran. 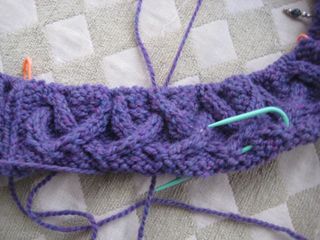 You'll note that the picture looks remarkably like the one from last week. I discovered a mistake in this section, which screwed up the cable crossings in half of it, which required some surgery as I was knitting the next row. I'm still not sure I have it sorted. Note to self: if it seems wonky, it is. Don't knit faster in the hopes that you can run away from the mistakes. You can't.

In other news, my beloved LL Bean shoulder bag, which I've had for almost 20 years (long before they were called laptop bags because only the very, very wealthy could afford laptops 20 years ago), is on its last legs. 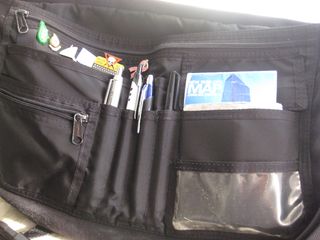 From this angle, it looks OK. 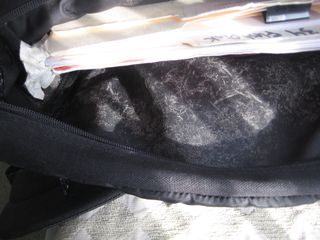 But the lining is pretty much shot and has started to leave little crumbly bits all over the crap I carry around. 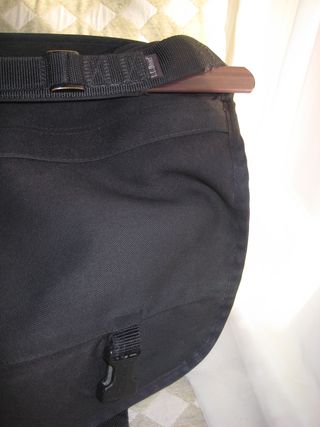 The real problem is this plastic bit that keeps the top straight. No amount of sewing can hold it back anymore. I think she's dead, Jim.

Before I go further, a word about Bean's fabulous customer service. When the shoulder strap on this bag broke about six years ago, the customer service rep sent three different straps for me to try out, since this style of bag is no longer made by Bean. She also included a post-paid envelope so that I could send two of them back, gratis. They won my heart, right there.

Despite that, none of their current bag styles thrill me and I'm on the fence about committing to one. So, any recommendations of other non-Bean shoulder/laptop bags that I should check out? The largest condition is that I'd like it to last another 20 years...

up with figs, Edwina explains it all for you 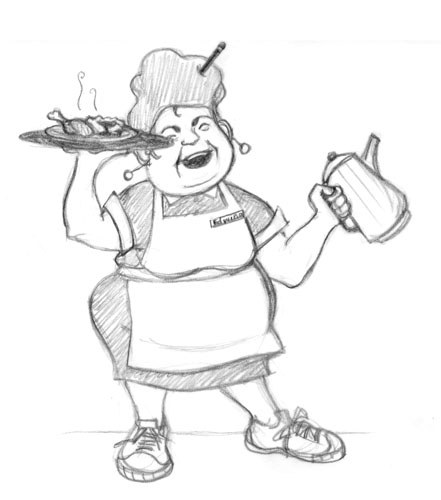 “I don’t know, Edwina. Somewhere along the way it just got so complicated, like somehow my self-worth was related to my Amazon ranking number and why no one wants to buy the next book. Ten years ago, I would have been thrilled to just have one book published, much less two. And, yet, here I sit, stuck in a remarkably meaningless game, if you look at the big picture. I mean, for each rung I climb I just keep worrying about the next one. That’s nuts, right?”

“I don’t know about that, hon. Might just be the way yer wired. Wouldn’t hurt none to switch to decaf, maybe. Lemme just deliver this fried chicken and I’ll get you some pie. Pie cures most doubts.”

“Do you still have the blueberry? That was some fine pie.”

* Last night and tonight mark on of my favorite events of the year: the Westminster dog show. I don't know why I love it but I do. The accidental poetry of the breed standards might have something to do with it.

* Dear universe: if you could somehow see fit to deliver me to this particular panel at SXSWi without it involving taking time off from work in order to get to Texas and back, I'd appreciate it. Ditto this event with Mr Habit in Iceland.  I await your reply. Love, me.

* If you're in the area, the Paper Ink Voice show on campus is small but mighty. I want Casey Stock's work but can't figure out how to get my hands on it. How can you be an artist in the 21st century and not have some kind of website/blog?

* This could make my love of crafting gum wrapper chains really pay off.

* The Guardian's Bidisha's essay on pubic hair is, perhaps, the funniest thing I've read this week. And I will never, ever be able to look at a chamois without giggling.

* The NYT's Disunion blog about the Civil War is a marvel.

* Two from NPR: Why girls like horses and unicorns and a bit from Prairie Home Companion, which is better to listen to than to read.

* If you like your cars steam-driven and your corsets tight, head to Waltham, MA, in May.

* Katha Pollitt on the lack of women writers in the big magazines. I love her.

* Dooce's experience in the ER with her husband is almost exactly what it would be like with Scott and I, horrible jokes included.

* The lengths the 127 Hours set designer went to.