up with figs, Super Saver 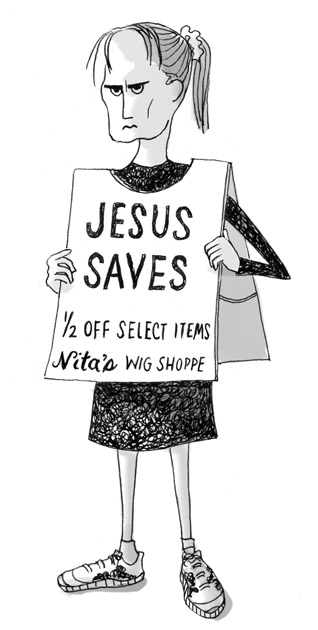 Walking around with the big board was a sucky enough job in the first place. When your momma owns the wig shoppe, your choices are few. So, Clarita walks.

Momma keeps telling her to smile a little bit. Everyone likes a nice smile. We sell more wigs.

But last time she smiled, some weird guy with a beret and bongos kept dancing up to her, saying, “I am the Lothario of Smith Street. Let me woo.”

Jesus, sadly, has not saved her from this stupid job. Momma won’t even cut her own flesh and blood a break on a wig. Clarita wants one that looks like Miss Dolly’s biggest hair. It’s good to want things, Momma says, unless it’s to not walk around with the big board. That you’ll just have to deal with.

Hard to say which I love more, the drawing or the text.

I don't know why, but I really like this one - I think they go together perfectly.

It's interesting to hear who responds to each particular one. This wasn't one of my favorite - I mean, it's OK - but each reader has a different fave. Like I said - interesting.

And, thanks, kmkat. I think we're getting the hang of it.