No podcast this week. It looks like I'll be releasing a new chapter every other week for the foreseeable future. Apologies.

I'd still love to have questions for a Q&A, if you have any.*

And so, some knitting:

I finished the pink socks. 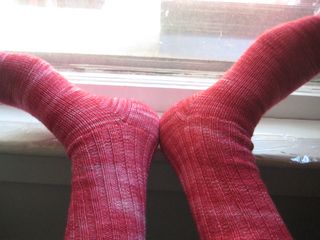 I also did the last bit of airing the stash closet, which was arranging my DPNs. Shut up. It is a big deal.

I didn't take a picture of that but did take yet another picture of my helper. See if you can spot him. 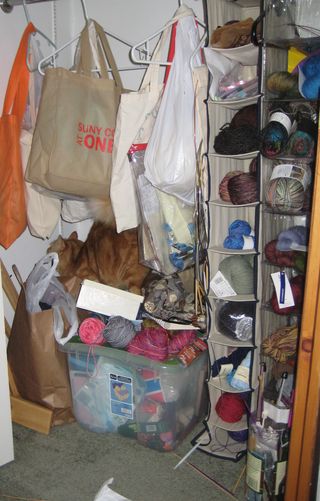 Finally, I managed to get a couple of things framed. I keep trying them out on different walls so can't say where they'll actually live yet. They aren't on the floor anymore, tho. 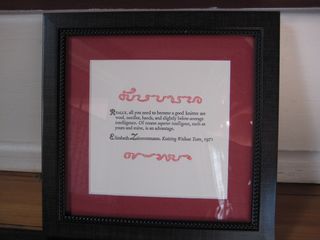 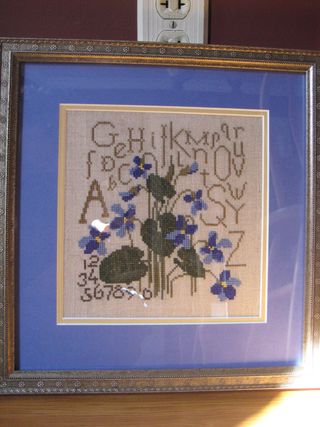 I love how this one turned out. Please ignore the ugly switchplate.

So how are your projects going?

* And, yes, is it on iTunes yet is a reasonable question. Working on it.

up with figs, your moment of angst 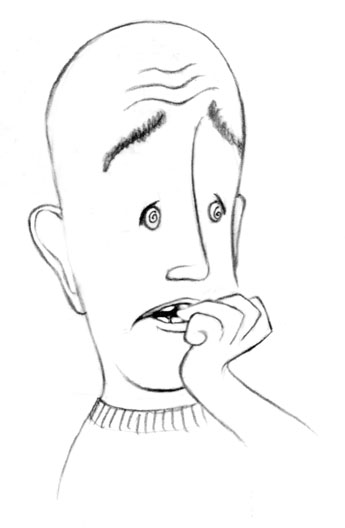 It’s so hard to know where to start.

Let us not speak of the economy.

It’s just so hard to prioritize.

Yet I can’t look away.

* I can't decide if this book makes me think that steampunk is jumping ye olde shark or if it's the best thing evar.

* Someone didn't think this ad all the way through.

* For the SF/F fans, Niall at Strange Horizons put together a remarkably cogent overview of how close the genre has come in terms of gender parity when it comes to what gets reviewed.

* Oh, Krtek. Is there anywhere you haven't been?

* Further proof that moving out of Knoxville was a good call.

* This story about getting your kid into college is worth it for the last graf alone.

* I want Jillian Tamaki to stitch covers for every book I own.

* If you have democracy, you will have a washing machine. (Hat tip to my dad.)

ETA: If you ever wanted a real life example of how absolute power can corrupt absolutely, listen to this week's This American Life.

the importance of public relations

Sometime last week, a flyer for a dance performance called "Mr. Bear's Furniture Testing Center" came home in the kids' school folders.  Cool, thought I. I mentioned it to the Diva. Cool, though she. We made plans to go to the Sunday matinee.

(Let me state up front that the event itself, a surreal mix of modern dance and stylized films, was great fun. Pooh Kaye and Victoria Lundell are a great pair. Percussionist Michael Suchorsky was like a third dancer. I could have done with a little less Walter Gurbo but ymmv. For the Austin-ites, the show felt like something Margery Segal and Jason Phelps would have come up with, if given a bear head and a few cardboard boxes.)

(Let me also state up front that one of the reasons I wanted to go was to support the Foothills Performing Arts Center, whose history is, at best, storied. But I want them to succeed. I do -- despite their best efforts not to.)

As the Diva and I waited to buy tickets, the ticket seller was giving a spiel to all of the would-be attendees standing there with kids. "The show really isn't intended for kids," Janet Hurley-Quackenbush said with a tone that made it clear that she though we were silly for even bringing children to an event advertised via flyers given out at their school. "We were trying to drum up attention for the workshop."

Here's the flyer. Let me know how effective it is at talking up the workshop. 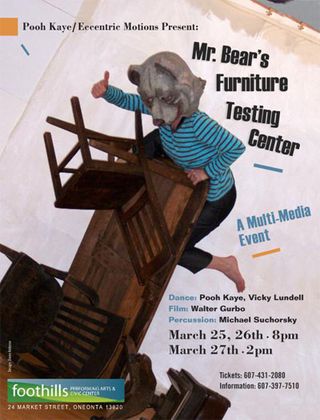 "It's not inappropriate for kids," H-Q continued. "You should know that one of the films shows stick figures defecating." She then went on to assure us that her daughter was there - and seemed stunned that most of us brought our kids in anyway. "The first act's only 30 minutes. You can leave at intermission if you need to," she said after I bought a ticket. She didn't even charge me for the Diva.

Here's a couple of things:

- If you want kids to come to the workshop, clearly state your desires on the flyers you give them.

- Don't underestimate the intelligence of your audience or of children. The Diva really enjoyed herself at the performance. If she can parse Yo Gabba Gabba without her head exploding, she can handle modern dance.

- I appreciate the information about the pooping in the films. I do. But there's no need to give me an anti-sales pitch when I show up. Don't apologize for what you are presenting.

- Finally, bringing in unusual acts is part of what a performing arts center should do. Why are you so afraid of doing that?

Again, I want this Center to succeed - and I'm not the only one in town who does - but none of us can want it more than the organization itself does.

Again (again), the dance itself was lovely - but I didn't expect to spend so much time thinking about everything but what was going on on-stage.

"Travel, like much else in life, can be more fun to read about than to do. When I'm reading a travel book and the protagonist sets out on a journey and the harbor lights drop behind, I imagine enviously what a grand feeling that must have been. In actual travel situations, however, I've noticed that moments of soaring consciousness are rare. Worries and annoyances and trying to remember which pocket the passport is in tend to deromanticize the brain."

--From Ian Frazier's Travels in Siberia again, which is great book, if an engagingly dense read.

"Just then the car hit a bump and all of us ricocheted off the ceiling. Roman said, 'Oh, these roads!'

'Dorogi, i duraki' (roads, and idiots) I said. (This is a famous saying, attributed to Gogol, who once noted that in Russia the two biggest problems were the roads, and idiots.)

Roman laughed. 'Yes,' he said. 'And they never repair either one.'"

Chapter two is now alive - or, rather, will be, once libsyn does something mysterious to the file, which should happen by 6 p.m. today. It will be here.

I also started a new sweater: 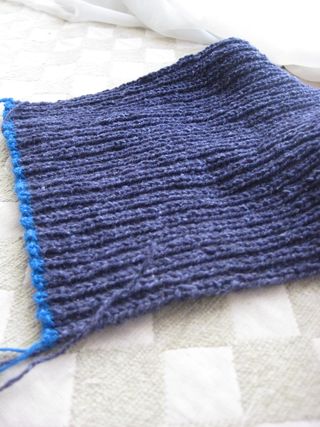 And in the time it took me take that picture, walk back upstairs and connect my camera to the computer, someone broke into my knitting bag and stole one of the balls of yarn in order to munch on its delicious Lavold silky woolness.

One of these two has to be the culprit: 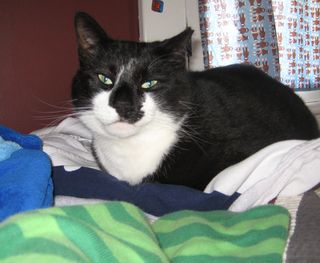 Suspect A. Note his disdain. 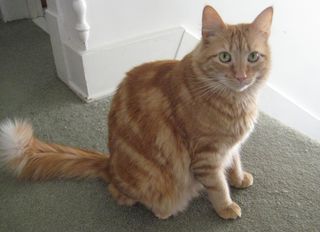 Subject B: Note his feigned cluelessness.

up with figs, peggy leg 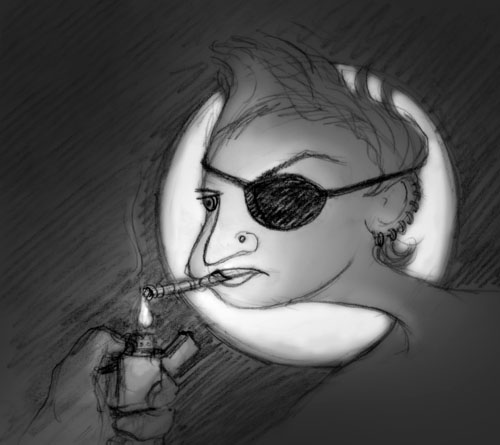 It’s just the eye patch, she said. Anyone wearing an eyepatch looks like a pirate.

No, he said. It’s not that. It’s also not the parrot colored hair or the limp. I didn’t even notice those when I first saw you in that dark bar, silhouetted by the moonlight. I saw the eyepatch later, when I was lighting your cigarillo.

It’s just you, he said. The way you stand as if you’re compensating for a rocky sea. How your good eye looks to the horizon, scouting for incoming marauders. And, of course, your cutlass.

You hate pirates, she said, accusingly. It’s not me, it’s you, right?

No, he said. I love pirates, especially this one.

* I was name-checked by Gregory Benford. I am not worthy.

* On emotions and wisdom. (Say what you will about David Brooks but this is a great speech.)

* One of the best things about living in a small town is not having to deal with this.

* If I ever write a textbook, this will be my license agreement.

* I've only just skimmed the surface on my reading of this Washington Post series on Top Secret America. But what I have read makes me want to sob. I just....um...ok.

* Ramen hacks. I might have to try the Shepherd's pie one.

and so we sugar off

As we do each year around this time, we hauled ourselves to the Farmer's Museum to celebrate the flowing of the maple sap and all that it implies, which is mostly that we've survived the winter and may just live long enough to see the daffodils bloom. 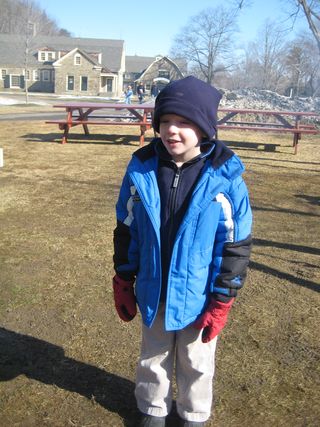 The weather co-operated this year. Temps had been in the upper 50s on Friday; down to the 40s by Saturday and in the lower 40s by Sunday. Because that's what Spring means around here. Today we woke up to snow. *sigh* 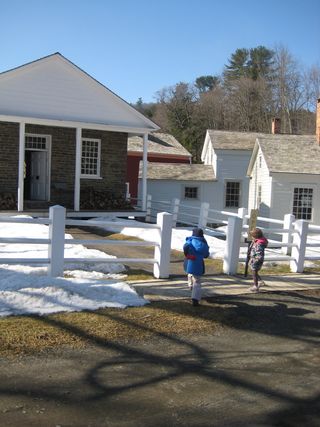 The Boy actually ran to the school building, which, given how his own schooling has gone lately, left us in shock. Not in so much shock that I couldn't snap a picture, mind. 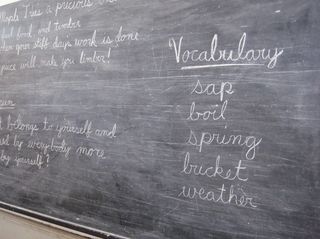 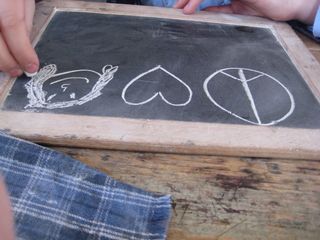 What the 5th grader took from the day's lesson. 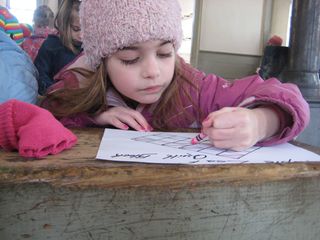 The Diva and her sassy manicure, which was a salon treat she got to experience with a friend. 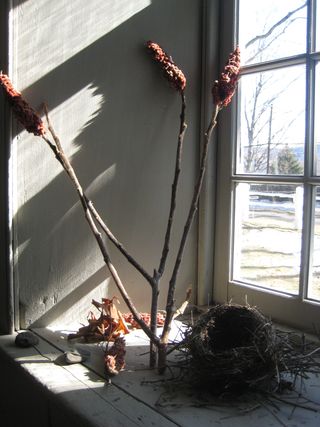 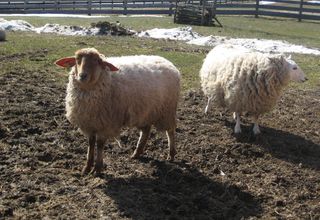 Sheep. I love their spindly legs that are trying to hold up all of the poofiness. Any one care to guess the breed? 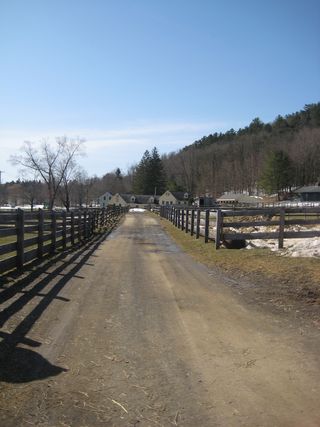 I took this shot largely because I was showing everyone what the Boy had done to my camera. After he spent some time with it, rather than make the lovely little beeps that let you know it's on and has snapped a picture, it now makes bird noises when you turn it on and barks when you snap the picture. I have no idea how to return it to the beeping. We should never let the Boy near NORAD. 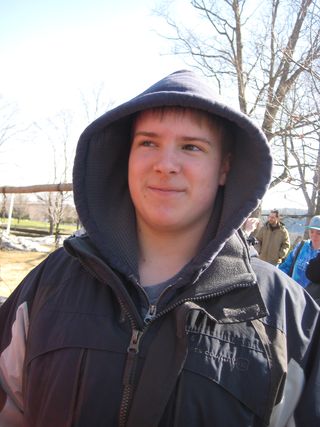 When we first moved here, this former Boy was about the same age as our Boy. We've been doing this long enough now that he's approaching Manitude. Time, she flies.

And, yes, he's too cool to have his picture taken. 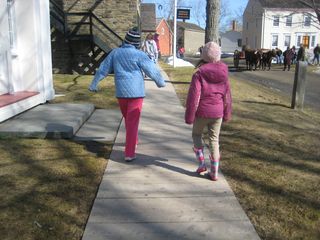 These two don't mind, tho.

qotd, for the Boy

Today's quote isn't really a quote because it's a poem and there's no good way to excerpt something without quoting the whole dang thing. And, so, a link:  "For Bartleby the Scrivener" by Billy Collins.

I want this embroidered on a pillow.