up with figs, noxious phone 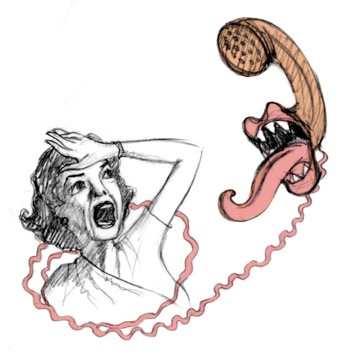 My mistrust of the telephone started in the 1980s, right after I saw A Nightmare on Elm Street, the original, the one with Johnny Depp, the only one worthy of the name.

There’s a scene with the main girl-in-peril, who’d later wake up with a fetching grey streak in her hair, is trying to phone for help. The handset grows a mouth and lips and waggles its tongue at her. Obscenely. And whenever I pick up the phone, my brain sees that scene, those lips, that tongue, the thrusting and the invasiveness.

That movie the reason I mistrust stairs as well. But that isn’t what you’d asked.