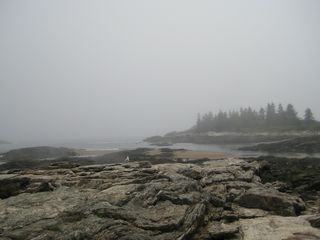 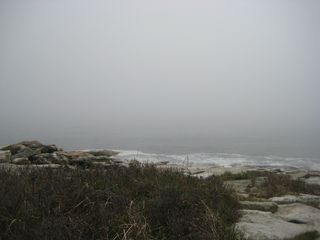 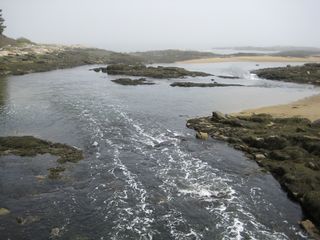 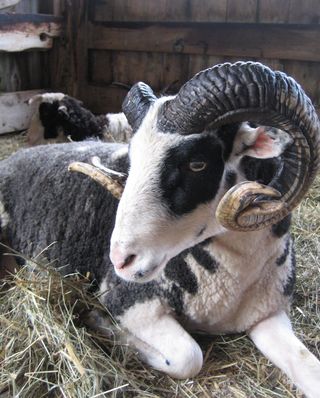 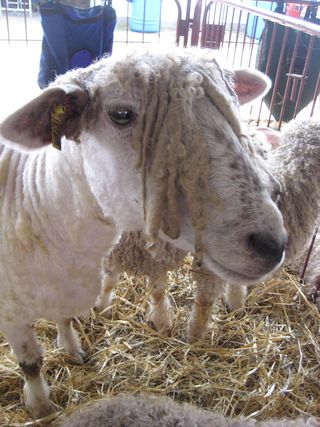 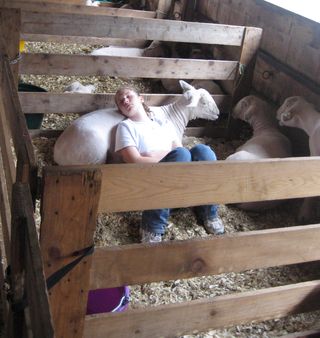 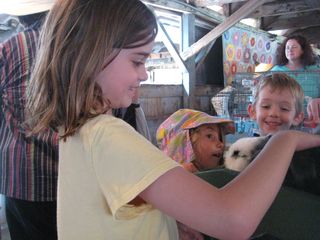 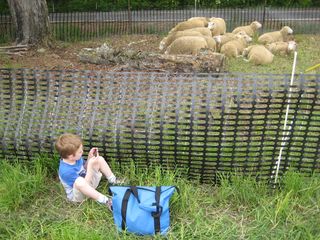 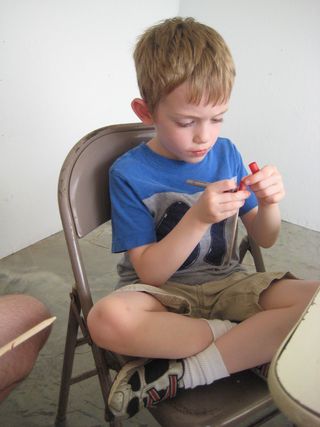 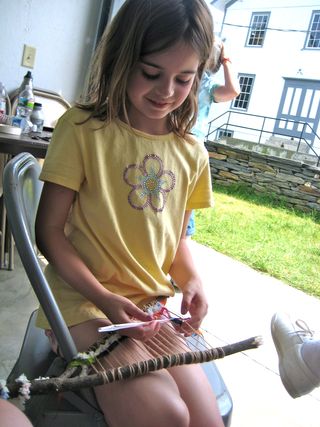 shameless self-promotion, 349 in a series

We just walked in the door from a fun-filled few days. I, for one, would be content to never leave the house again. Or, at least, until late June.

And so, a quick bit of promo: The Boy and his turban.

"Democracy is like a tambourine; not everyone can be trusted with it."

I promised myself a 40th birthday trip, back when I turned 40. What with one thing and then a semester then a remarkably bleh* couple of months, I never did managed to get out of Dodge.**

Then I noticed that Chris Thile and Michael Daves, both of whom I adore, were playing in Portland, Maine just after classes ended. And so a plan was hatched.

Some of the things I'd planned for the trip didn't quite work out; some did. The show remained on. Yesterday, I left the kids and the husband and the bleh behind and hit the road.

The guilt was nearly crushing, frankly. Still, the time spent staring at the traffic in front of me, having nothing much to do but get to Portland by 8 p.m. was a nice change from the constant busyness of my life. It was nice to not talk or write or think, really, for a whole five hours. Alone, but not lonely.

Which was why, when I was walking out of a rest stop with a coffee and walked nearly into Thile and Daves as they were coming out of the men's room, I was at a complete loss for what to say. I didn't even manage to take a picture. I did, however, manage to burble out that I was coming to the show. It was a moment of great awkwardness and wonderfulness.***

And the show? Incredible. Words fail. It's a privilege to watch two people do something that they live to do. Recordings really can't capture the nuance and energy. One of the things I miss about living in a larger town is live music (that isn't a college bar band).

Today I'll head further up the coast to visit the Doula Quinn and her family. Then off to hook up with my family in Western Mass. for the weekend. It's been a nice break.

Oh - and the tourist map of Portland the hotel gave me had three yarn shops on it, all within a four block radius. Way to have your priorities in order, Portland. I tip my needles to you.

A quick round-up of actual knitting, which I accidentally left at home:

The Slinky Ribs sweater now has one sleeve: 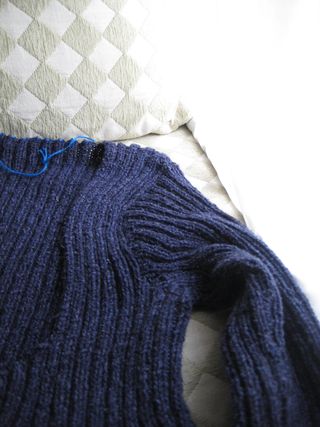 This one sleeve sucked up as much time as the body of the sweater did. Stupid, stupid sleeves. Also, the sleeve is too short; I'll have to pick out the bind off row and keep working. This is entirely my fault, however, and sprung from what was going to be a yarn shortage. Another ball in the same dye lot was acquired and all will be well. Except for having to do more knitting on this one dang sleeve. That's just annoying.

I also seem to have started a scarf: 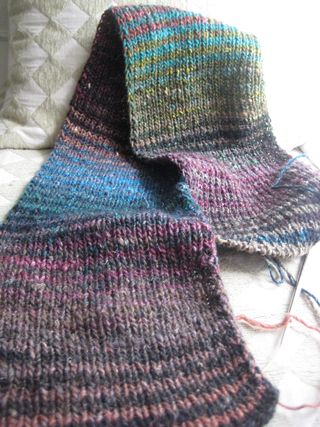 Do I need a scarf? No. Do I know anyone who needs a scarf? Again, no. Yet here we are.

** Or its upstate equivalent.

*** They were driving a red minivan, btw. Which tickles me. 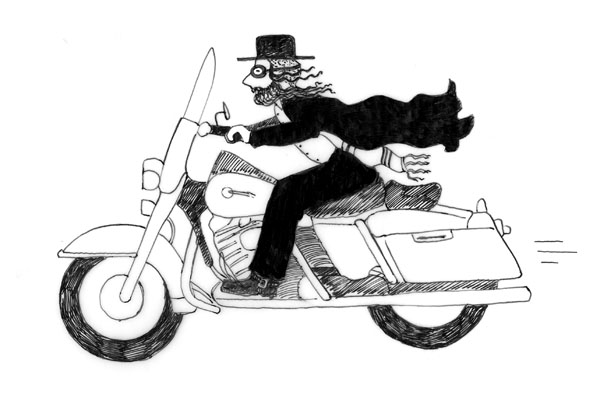 * I might have to break out the ancestral pasta machine since Ruhlman makes it look so easy to make the dough.

* It's tough out there for a toddler.

* The science of cheese. Mmmmmm. Cheese.

* The symptoms of Celiac are vast and wide. The Diva got lucky, in that it only took a couple of months to figure out what was going on with her. Most diagnoses take years, simply because the symptoms are so vast and wide. You are your own best advocate. The benefits of finding out, however, are enormous.

* What I find most astounding about the Flash Mob on my campus is not that it happened but that it is not raining or snowing.

* It's not so much "global warming" as "global weirding."

* Mini-quote from a great essay about depression: "I knew that if anyone other than me was describing these symptoms I would lovingly handcuff them and take them to the hospital and help the shit out of them, whether they liked it or not. "

* Rich says what I've been thinking about Henry Granju's case. (I also think there's a drugs in high places angle, too. But that's less damning than pedophilia and/or sex with barely legal boys.)

* Welcome back to Bordertown.

* Thanks so much to Trumpet Hill, Robena, Celeste and all the knitters who wandered out on such a gray day. A fine time was had by all, I think, and I can't wait to go back. Which I will, whether they want me to or not.

* I'm having a music crisis and need your help. Most of what I listen to is either bluegrass-based or ten years old, because having kids really put a crimp in how much attention I have leftover for chasing down music. What I need are songs that are poppy and/or rocky and/or hip-hoppy that would be good for running to. Any suggestions?

* And, lastly, on Sunday, we went to the HaSu Ranch's alpaca sheering day, as we do each year. 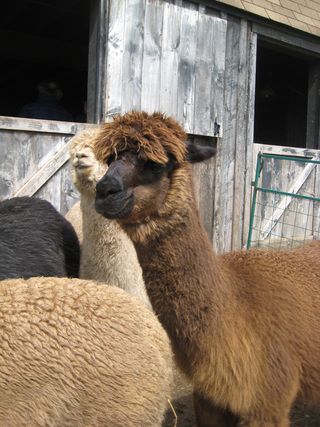 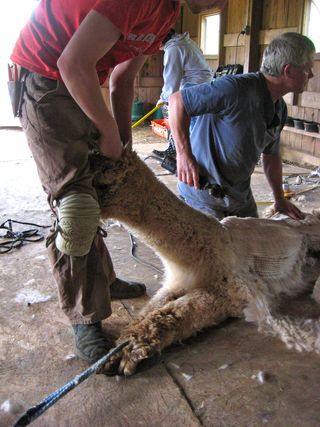 I love how their ears are used as handles. The alpacas are OK, by the way. No one appears to be in mortal distress, just resigned. 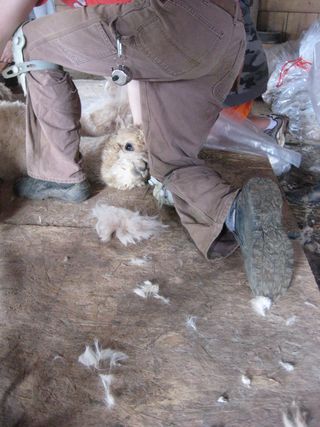 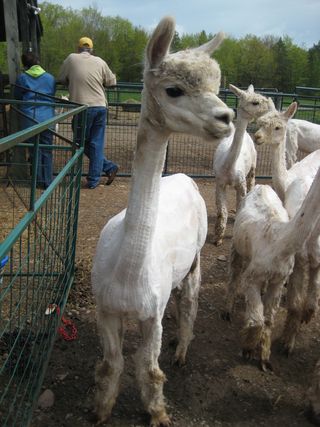 "It was reported that Iceland had entered a period of national soul-searching in the aftermath of its financial collapse. 'Knitting is the opposite of idolizing money,' said Ragga Eiriksdottir, a former sex columnist who now knits professionally. 'People are also making jam,' said another Icelander."

Sweater Quest: The Podcast + a question

For your listening pleasure (I hope): Sweater Quest Chapter 6.

And while I have you here, a question: Lisa and I have been toying with making the art from this Figs available in some kind of tangible form. But we don't know what form that should be. Would you want art and text? Just art? And on what? T-shirts? Stationery? Exotic underpants?

The only non-negotiable bit is that there will be no dead mickey on anything that is made. Yes, we are afraid of lawyers. Very, very afraid.

My cats thank you for your response. 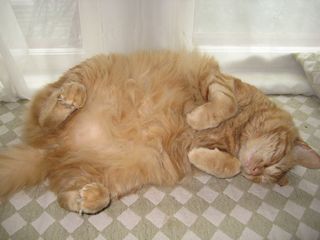 Touch the belly. You know you want to. 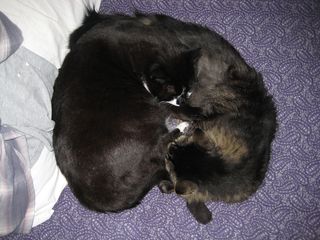 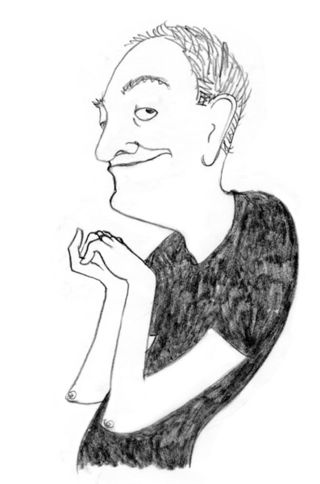 Are those pistachios? I love pistachios. For me? Oh, I simply couldn’t. Maybe just one.

Did you hear about Pippa? It’s all about Pippa right now. Pippa this and Pippa that. She’s simply divine, Pippa, even when she can’t keep her clothes on.

Maybe another nut, if you don’t mind.

Did I tell you about Juan? Oh, I simply must tell you all about Juan. He’s en fuego, darling. His milkshake brings all the boys to his yard, if his waxing consultant is to be believed.

May I take a handful for later? These are simply divine.

I love what you’re doing with your hair. You’ve embraced the gray. I wouldn’t have the guts to look my age.

I’m going to put the rest in my pocket. I simply can not resist them. Hopefully I won’t be attacked by squirrels on my way home. How the neighbors would talk.