In case you missed the Lion Brand event, here are some online artifacts for you to enjoy. Usually, I'm less sweaty. And more tall and svelte.

The blog, with pictures. And the video.

More later. Maybe. Depending on whether or not I am eaten by a moose.

up with figs, vishnu mama 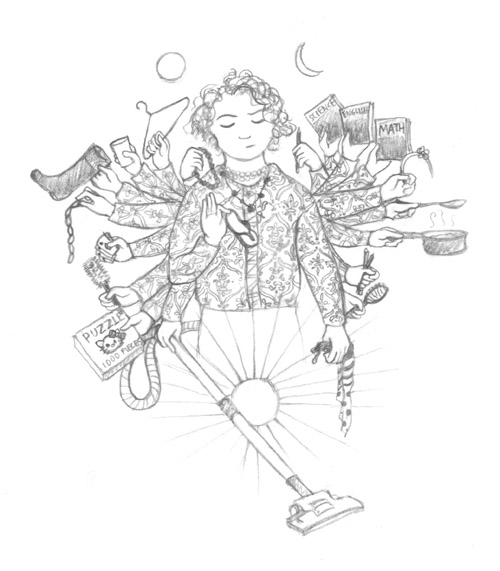 I have been enlightened. My role in the universe has been made clear. My sole function is to return items to where they belong.

That pencil jammed into the sofa cushions? I’d be delighted to return it to the pen mug. It is what I was put on this earth for.

Your barrettes? Your hairbrush? Your headbands? I am their keeper. Please scatter them like so many flower seeds.

I am honored to know the righteousness of cleaning out your closet. My way is clear.

Those flip-flops you left in the middle of the kitchen that I then tripped over while holding the smoking hot pot of polenta? I shall return them to the shoe closet once the burns heal.

Just as the dung beetle has his role in the great cycle of life, I have mine. I live merely to roll your shit into a giant sphere.

* How can a Prague restaurant not serve dumplings? That's crazy talk.

* Poverty is a crime.

* If I am ever transported back to pre-WWI England, I hope to have the stones Almina had.

* I don't know which I love more, the illustration or the publication it came from.

* I would do this run just for the sake of novelty. Plus I reckon it's less humid in the tunnel.

* I might have to pick up an actual copy of Vanity Fair just to read this.

* This dessert would make Michael Pollan sad. (That seems like a Tumblr blog someone should start.)

* Have any spare cocktail umbrellas?

* If one were, say, near Quebec City just on the other side of Montmorency Falls for a few days, what should one do? And which yarn/fabric/button shops should one haul one's family to?

First - thanks to all who came out to Lion Brand Studio on Thursday. I had a lovely time - and hope you did as well. I didn't buy yarn, tho. My fiber habit seems to be being eclipsed by a button habit. This is all I got: 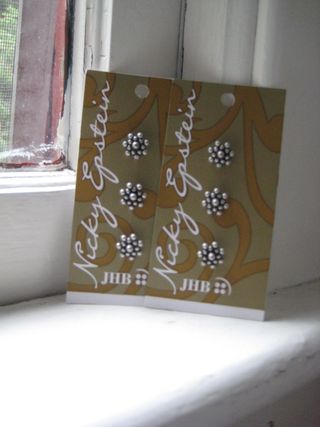 I have zero idea what I'll use them for.

Also, while I was doing my whirlwind trip to the city, I stopped in the Museum of Arts and Design, because I can't go into NYC without going to at least one museum. It wasn't the museum I thought it was* - Ellen, who I stayed with, insisted that I wanted the museum near Lincoln Center not near Columbus Circle - but it was cool nonetheless. If you get a chance, see the Otherworldly exhibit before it closes. I loved the snow globes of immanent peril.**

Second - I just cleaned off my camera's memory card in anticipation of a trip with the family and found this: 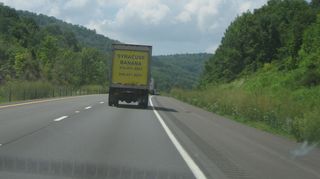 What I wanted to see behind it was a truck for "Syracuse Monkeys."

* I wanted the American Folk Art Museum, which had moved.

qotd, cat in a box

"In fact, the mere act of opening the box will determine the state of the cat, although in this case there were three determinate states the cat could be in: these being Alive, Dead, and Bloody Furious."

-- Terry Pratchett's Lords and Ladies, which I've been listening to on my morning runs when I haven't had any new podcasts. Eventually, I'll finish it and you'll be spared the quotes.

if you are reading this ...

... I have successfully made it out of my house and am on my way to New York City for a gig at the Lion Brand Yarn Studio at 6 p.m. tonight.

(If you are not reading this, it has been replaced by an interesting/amusing/grouchy story about why I am not on my way to the Lion Brand Yarn Studio. (And, yes, this is a Schrodinger-esque message to post.))

Few things are certain in life, of course. But what I can all but guarantee is that I'll forget something. Previous somethings from other trips have included a toothbrush, a hair brush, my knitting and decent shoes. Any guess as to what it'll be this time?

And, here, have a picture of a cat: 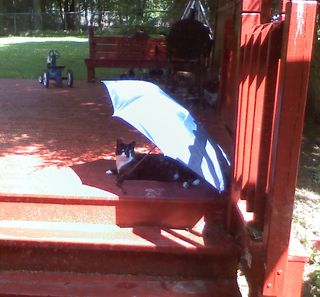 up with figs, yew goldarn interlopers 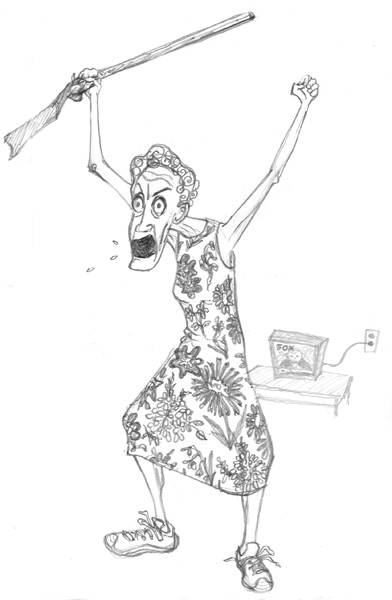 Edna Jean Fleegletiter remembers the day her old neighbor lady Zeleena Dab - the one with the shotgun and askew wig - took aim and fired at the “revenuers” out to “violate her God-given rights.”

Fleegletiter had just sat down to her morning cup of free trade rooibos when the shots rang out, right in the middle of Steve Inskeep’s story about the plight of the Guatemalan mud grasshopper.

“She just kept screaming about the lady with the crazy eyes on the Fox News,” Fleegletiter said. “Then she started shooting at my biodynamic arugula and muttering about the FBI coming to take her guns.”

Local police were called by Fleegletiter and another neighbor.

“Why do I have to get on the ground?” Dab said when the officers came to arrest her.

“You shot at us,” the officers said.

No officers were harmed during Dab’s arrest. Bond has been set.

* Dunno if I'll ever make these muffins but they sure are fun to read about.

* College journalists kick it old school. I'm old enough that I remember the ancient guys down in the press room showing off their hot type scars.

* I have a friend in mourning. While this helps, it still doesn't help-help.

* For all of your scientific glassware needs.

* It's funny because it's true.

* Edited to add, because I hit post prematurely: turns out parenting style needs to be matched with the kid's personality. (ht nerak.)

We went away this weekend in order to hang out at a lake and play games with Heidi and her clan. (She describes it here and I agree on Castle Keep.)  Then this morning I ran up to Sharon Springs for a story, which means that Mount Laundry has yet to be tackled, which I'll do, once I do this.

While hanging out with the humans was great fun, also great fun is getting to hang out with Sasha the Wonder Dog, the Dugan's Keeshond. She is sweet and gentle and smart. All one could want in a dog, really, and the Keeshond is now high on our list of possible dogs when the time comes.

I mean, how could you not love this face? (snapped by Heidi on their way home.)

"My dog, a shepherd mix named Cooper, doesn't care where we are or what time of day or night it is, or even what the weather is like. He doesn't know what his resting heart rate is and rarely bothers to wear a watch. Anytime, anyplace, for any reason, he just loves to run.

Watching Cooper run is a treat because it's an exercise in pure joy. He just switches his brain off and goes. And every time he does - every single time - his face and body telegraph one simple message: This. Is. AWESOME. I cannot BELIEVE I get to do this! I'm runningrunningrunningrunning!

How many of us can say that?

When it comes to being better runners, we could all learn a thing or two from our dogs......If someone asks, "Wanna go outside?" answer in the affirmative. And whatever you do, do not pee on that old guy's lawn. Because he will yell."