Ladybird scratched a nail file over the end of a less-than-perfect nail. “Actually, I figured out that running for office is a lot like being in a beauty pageant. Look good. Smile and wave. And tell the people only what they want to hear.” She blew away freshly buffed nail fuzz. “Oh, and make sure you wash your hands after applying self tanner. Otherwise people might think you’re secretly Mexican.”

-- From Beauty Queens by Libba Bray, which is amusing and amazing and absurd and inspiring.

Question to the fiber folk: which living icon/teacher/artisan would you like to know more about? Please pass the question along to others, too. I might be hatching a project....

Waaaaaay back when the Boy was a baby, which seems like an impossible state for the Boy from this point six years on, I bought Heather Ross' gnomes and fish fabrics because I loved them. My intention was to make something for the Boy and/or his room.

Time passed, as it does.

I rediscovered the stashed fabric while searching for something else. And, so, I made a couple of things for a friend who is currently great with child:

(One of these was sewn twice because I forget to cut off the selvedge edge. Because my brain isn't a finely tuned work of exquistie German engineering.)

I need to finish up a couple of other bits and pieces and chuck the whole box in the mail.

I've also made progress on this: 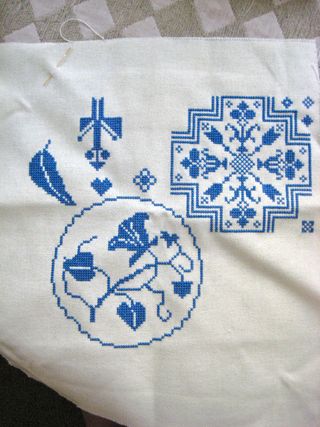 It no longer looks obscene.

Finally, I've started a sweater for the Diva from some of the Stitch Bitch's leftover yarn. 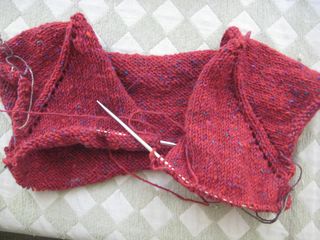 So far the Diva approves of both color and pattern. This could change at any moment, of course, because we are mean and the universe is capricious.

up with figs, rain queen 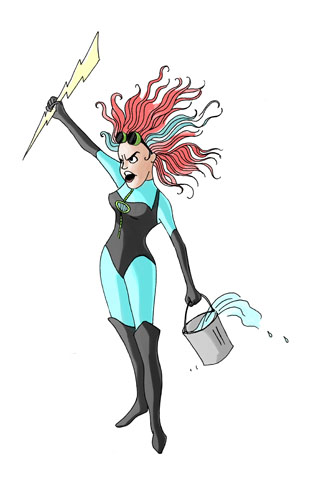 I used to think that teleportation would be the best superpower to have, if you can call being able to deconstruct and reassemble your molecules a superpower. Which I do. Because it would be super.

While I still think that would be cool, I would now greatly prefer to be in charge of rain. Not really a superpower by traditional definitions. But, again, think beyond that box.

If I could make it rain - the actual definition, not the strip club connotation - I’d always be the hero. Texas needs rain? No problem. Need water in the desert? I’m on it. And if I could stop the rain, too, which I’m assuming I could, all of the flood ravaged bits would have time to clean up before the next round.

Frankly, I’d be the most powerful person on the planet. Water, both its lack and excess, is a stronger force than oil.

Besides, the costume alone would be fabulous.

* Yes, they are both morally bankrupt. But one is more bankrupt than the other.

* Seven steps to a happy marriage.

* What amuses me most from this story is why they taught girls to embroider.

* This story makes me feel better about humanity.

* On lists and organization. FWIW - I am a compulsive list maker and have gone so far as to install a giant whiteboard above my desk so that I can keep track of everything that needs to be done. Writing down "print COMM handout" and "Inspection" frees up more of my brain for plotting to take over the world daydreaming.

if the weather holds

It appears that the children are back in school. Fingers are crossed that they remain that way.

As a result of last week's chaos, local entropy has increased exponentially. And, so, little is getting done today that is worth sharing with anyone else but that will keep me employed. Unless you like to hear about my ongoing attempts to figure out what smells so odd in the Diva's room. Which, seriously, I don't really even want to hear about it and I am the main actor in the drama.

As a result of that, I don't seem to have any leftover brain power for this. I wanted to. I did. But it's not gonna happen. :(

So, um, here. Have some pictures of cats wearing berets.

“I think good-looking people seldom make good television,” (Hugh Laurie) said. “And American television studios almost concede before they start: ‘Well, it won’t be good, but at least it’ll be good-looking. We’ll have nice-looking girls in tight shirts with F.B.I. badges and fit-looking guys with lots of hair gel vaulting over things. So at least we’ll have achieved that base standard of entertainment.’ ” He shook his head. “I think that’s hugely misguided. The glory of American television is Dennis Franz.”

- From the New York Times' profile of Laurie.

Yesterday, the kids had their first day of school. As we do every year, I took a picture: 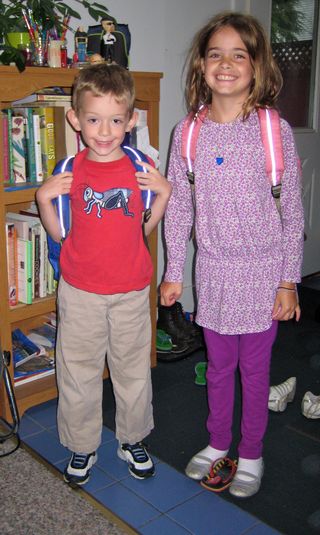 (Yes, I have given up on getting the Diva to brush her dang hair already.)

We took the picture inside because it was raining. It started the night before. And continued through the morning. And the afternoon. So much rain, in fact, that school was let out early because the roads were flooding. And it kept raining.

School was canceled today. A state of emergency has been declared*. And still it rains. We shall see how it goes.

* We're so high on a hill that the rain would need to reach Apocalyptic levels before we'd need a canoe.** But we are luckier than many right now.

** which is great when there are floods. Not so great when you are returning from a long run around the neighborhood and have to face a 35 degree incline.

School is closed again today, because parents like to have brief glimpses of freedom snatched away.

up with figs, mother's little darling 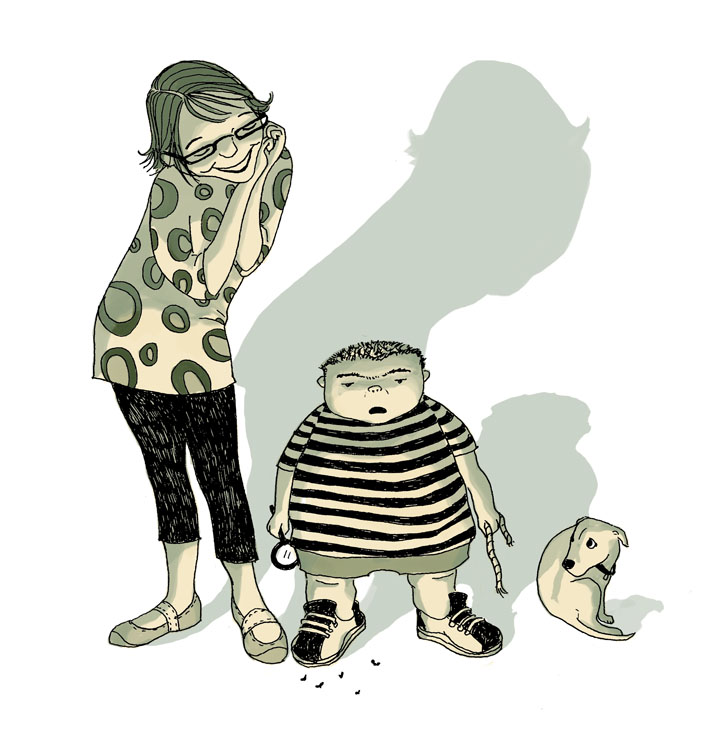 Really, mother? A puppy? Why on earth would you give me a puppy?

You know full well that insects are my true passion, that no other animal could compare to the glory that is the Gryllotalpa brachyptera or the Opodiphthera eucalypti. Squeamish much, mother? Didn’t want to find long-nosed weevils in your underpant drawer again?

It was an accident, remember. No way I would foul my weevils with your undergarments. Indeed, mother. They are still not over the trauma.

* What parents need to say.

* For the beginner runners.

* Lev Grossman hones in on how e-books may change how we read.

* Have any local folk had meat from Nectar Hills Farm?

* Dear student; why are you in college?

* I've long wondered what Babesiosis is. Now I know - and know it's endemic in this area. Woo?

* He laughs at your deep fried butter.

* A tribute to Blossom. And, yes, I was a huge Murphy Brown fan, too. Still am, in fact. And will now see if old eps are on Netflix....

* Two from Slate related to having XX chromosomes: Living the Bible and Autoimmune disorders.

* Adam Roberts, whose work I love, on this weekend's Doctor Who. There are spoilers.