up with figs, resistance is futile 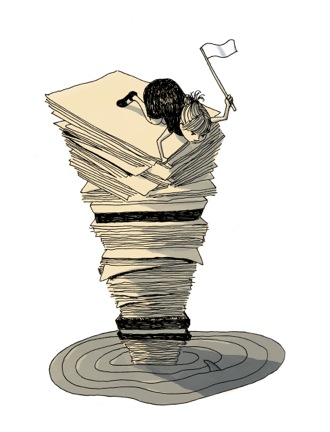 Today I have decided that this will be the day to Get On Top of Things. I am Filled with Purpose. I have Organized. I have Sorted and Stapled. I have Moved The Pieces of Paper from Over Here to Over There. I have made a List. Then made Another List. I have not Dilly-Dallied or Waffled. I have made Strong and Confident Decisions in order to Fulfill My Goals. I have Risen to the Occasion. (I have also Eaten Two Pieces of Peanut Butter Toast but that may not be germane to the discussion at hand.)

Still, the Things, metaphorically, are Underneath Me because I am On Top of Them.

And I suspect that in less than 24 hours, the Things, much like the South, will Rise Again. Such is there nature; such is my plight.

I wish you Godspeed in your quest. It's the season of purge. My local recycling dumpsters will have a full belly by the time I'm through- or, you'll find me under a pile of papers. Just don't forget to recycle them once you scrape me up.