what I am thankful for #1

Scalzi is going to blog daily about what he is thankful for. I am not nearly as together as Scalzi but was thinking about the exercise last night while watching an episode of House Hunters International, which was on simply because the Diva appears to be fascinated by it.

Said episode was all about a young adult, Chen, in Tel Aviv, who was searching for her first apartment. As part of the tours, the real estate agent was made sure to point out the bomb shelters in two of the three apartments. In first flat, the shelter could also be used as a closet. In the second, a guest room. But there was no hiding what they were, which was small cement rooms intended to protect the occupant from explosions.

Chen and the agent agreed that they were very good things to have in one's home. Part of the reason the third apartment was rejected was because it didn't have one.

That's when it dawned on me: I am thankful that the availability of a bomb shelter has never factored into to my purchase/rental of a place to live. I'm thankful that I don't have to consider it among the list of mod cons. I'm thankful to live in a place where the likelihood of someone trying to blow my family and me up is small enough that I don't have to have an entire room devoted to my safety, even if I can store my sweaters in it when the air raid sirens aren't sounding.

You? What are you thankful for?

up with figs, the lonely giant 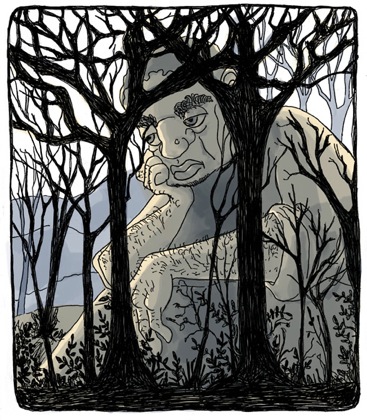 No one knows the pain of the melancholy giant.

They think it’s funny, all part of the grand adventure, to run into the woods and face the giant on their quest. But the giant never wins, no matter how hard he tries. As much as he might want to grind their bones to make his bread, the little girls and the stroppy boys always get away in the end., leaving him breadless.

And it makes him sad. What good is being a giant if you never get to win?

* Adam has a new blog! (Sammaches are involved.)

* You really ought to be watching Our America.

* Dancing Ood. And this just makes me happy.

* There are things about Knoxville that I miss. David Hunter and Don Jacobs hit upon two things - inculcated misogyny and cronyism - that I don't miss in the slightest. And, no, it's not that bad everywhere.

* A photographer shares my fascination with the Willard suitcases. I'm gonna see if he needs help with the writing bit.