A quick one for you, since the kids have a snow afternoon* and I can only wrangle access to my computer in wee little bursts.**

This is stolen from Anne Lamott.***

Imagine a picture frame. This picture frame's opening is only one inch on each side.**** That's it. That's all you can see. Start here. And when you start to feel overwhelmed with what you're working on, when it all starts to feel like it's too much, focus on your frame.

So pick up your frame and describe your view (exterior or interior) right now.

* They were dismissed early because there should be sleet later, which, given the couple of inches of snow we just, should make driving really exciting.

** Yes, I let them play on my computer. So far, they seem undamaged. My computer, however, is full of crumbs.

**** You can do this with a real picture frame if you'd like. I'm assuming you don't have on handy.

* It's shit like this that makes me wonder why I bother to write even one fucking word.

* Get your own combat knitter patch.

* Perhaps what I need is a pseudonym.

* Why creativity scares us.

* How did I not know this existed? Now I must see it.

* If fonts were cats.

shameless self-promotion, 363 in a series

It appears that Mondays are just going to kick my rear end this term. So, here, have some newish content from Locus, written by yrs trly: I'm still a little put out by Kage Baker's death. Because, yes, it is all about me.

There is no time. Let me sum up.

I finished the back of the Blumchen: 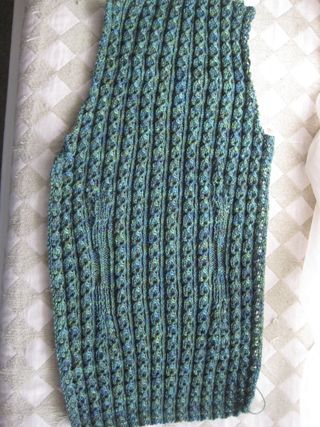 Unblocked, it doesn't even look like it would fit my 9-year old. I did block my swatch, tho, and all should be well eventually.* 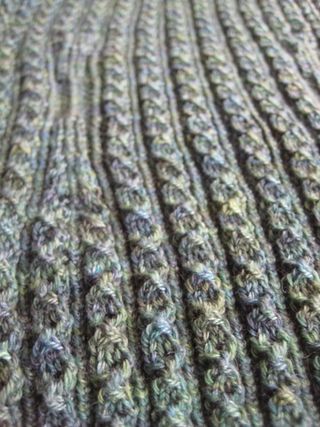 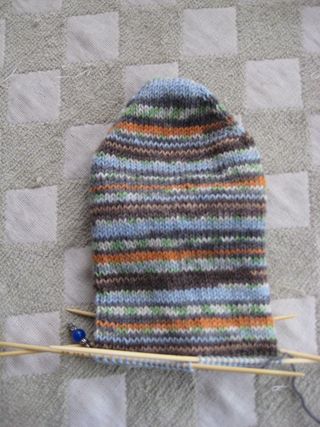 I'm not in love with the yarn or colorway but it'll do.

Finally, a sad but wonderful hat: 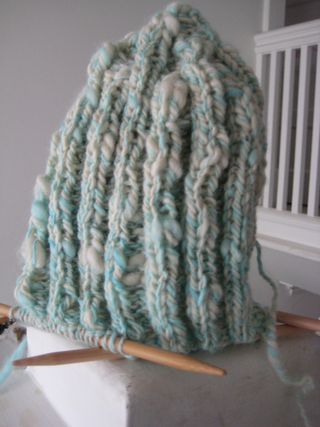 Look at how lumpy and bumpy and weird this top-down hat is! But, dudes, I made this yarn with my own two hands. And a wheel.

For today's exercise, go someplace where you are surrounded by people you don't know. Pick a candidate. Describe him/her using active verbs and without adverbs. How did he/she get here? Where will he/she go next? What is his/her biggest joy? Biggest sorrow? Write that down.

No, it doesn't matter one bit if you are correct. Just do it.

In other news, I am pondering a kickstarted campaign, one that would be about talking to spinners and knitters about hot button issues, like faith. Any thoughts? Anyone other than me find this interesting? And, yes, we would be knitting/spinning while talking.

* Are you a 4th-8th grade chemistry teacher? Get a free kit full of science-y goodness.

* This just makes me nutty, that those who holler most about government spending are the ones who are taking most of our tax dollars.

* What to do when caught in a crap tsunami.

* This is both fascinating and creepy.

* I love this project.

* Of course my alma mater has a Prize for Civility in Public Life.

shameless self-promotion, 362 in a series

I had grand plans to post a knitting/spinning update today but it's not going to happen. And, so, a little shameless promo in the form of a feature about games I wrote for the local almost-daily.

Also, a little more shameless promo - since it seems that lots of folks got ereaders for the holiday just past, perhaps you'd like an ebook to put on it? (Kindle, Nook)

qotd, the epidemic we forget about

"Crosby calls the 1918 flu "America's forgotten pandemic," noting: "The important and almost incomprehensible fact about the SPanish flu is that it killed millions upon millions of people in a year or less. Nothing else -- no infection, no war, no famine -- has ever killed so many in so short a period. And yet it has never inspired awe, not in 1918 and not since, not among the citizens of any particular land and not among the citizens of the United States."

-- from Flu by Gina Kolata.

(Oddly, I was researching the Spanish Flu (long story) before it became a Downton Abbey plot point. And speaking of, I jump up and down with delight!)

One of the perks of working from home as much as I do is getting to know the local fauna. Like, say, the zombie squirrel.

Zombie squirrel first showed up in late fall. I was typing away, lost in my own little brain, and happened to look up briefly. My eyes were met by a squirrel's eyes and we stared at each other quite some time before I got a little freaked out and looked away. He then scampered off. Score one for zombie squirrel.

This game has gone on since then. Every now and again I'll look up and there he'll be, staring in, muttering about how tasty my brains would be should he make it inside to eat them.

The cats, it must be pointed out, are completely useless. The late afternoon, which is when zombie squirrel tends to show up, is prime napping time. Which shouldn't be confused with the early evening or mid-morning napping time, which is equally prime. Useless.

However, McGregor happened to be awake earlier this week. I had enough time to grab my camera to provide proof of the zombie squirrel's existence, because, dude, even I wonder if I'm imagining it. McGregor flung himself at the window just as I snapped the picture. 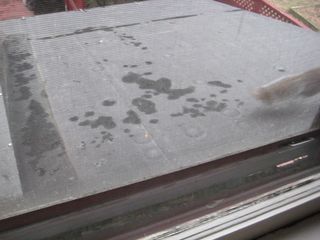 *sigh* I'll get him next time.

McGregor has been my constant companion since. 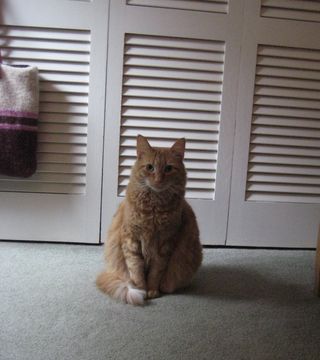 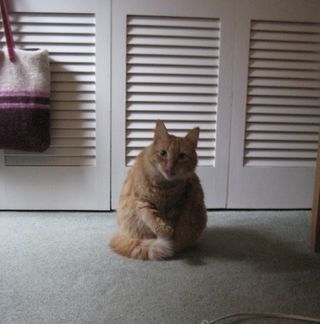