I seem to have finished the shawl. 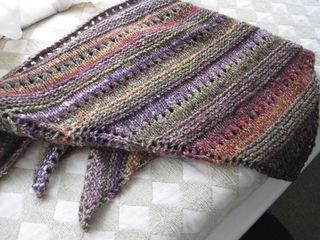 The pattern was La La's Simple Shawl (Rav link)  done with three skeins of Noro Yuzen in the evocatively named Color #4, Lot B. I had to do that thing that knitters do toward the end of the last skein, where you guess how many more rows and a bind-off you can get out of what's left. I cut it close: 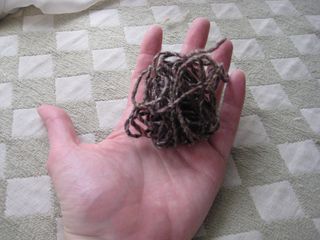 It's been busy around here, as it usually is at the end of the term. The Featureless Saint has been doing back-to-back shows, I'm dealing with a variety of group projects, the Boy gnawed through his lip and the Diva has a cold. My response? Spinning.* 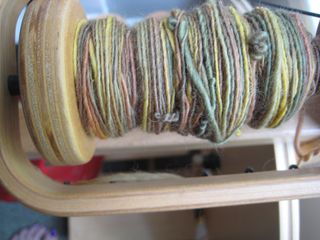 I may have some other fiber on deck, too: 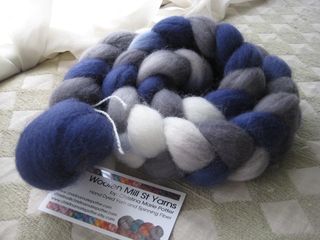 It's 4 oz of 100 percent Corriedale from Woolen Mill St Yarns, purchased from the Loopy Ewe. The colorway is "Tardis." Because if I can't have one, I can at least spin one.

Speaking of spacey-wacey-timey-wimey things, there was a rare alignment of bodies the other day: 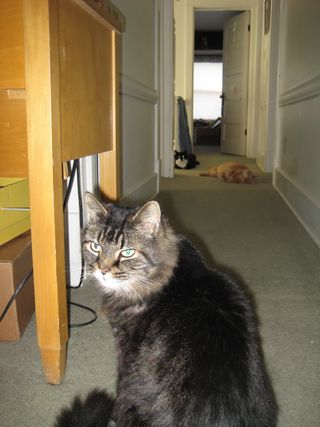 (you might have to click on the picture in order to see all three planetary spheres. McGregor may have his own gravity by now.)

* also running. But I have no pictures of that, unless it would be a picture of my incredibly muscular thighs. The whippet-thin runner physique is just not going to be expressed by my solid peasant genes. Still, I'm who you want to hang out with during a famine because I won't have to eat much. So there's that.**

Let me know when you're ready to spin up some keeshond, colorway ... well, Sasha.

What a pretty shawl!

Congrats on the narrow knitting finish. Pretty shawl! And wow, all the cats are in alignment--that's rare!

The trick with the Sasha will be what to mix it with. I do have something that might work, tho.... hrm.

Thanks on the kudos. It was a squeaker.

Adrienne, thanks for the Peter Sagal piece earlier this week. If the Tardis yarn works, let us know. Could use some time travel just now.

Would it necessarily have to be blended with something?

I honestly don't know if it *has* to be blended - but I suspect it would make it stronger. Maybe bring some to the reunion and I'll play wiht it?