the thing with eras is that they end

This past weekend, the husband and I went to a reunion at Allegheny College. It was, in a word, wonderful.

See, here's the thing. I know a lot of folks didn't have a formative college experience, one that pretty much defined who they are. And that's fine. I harbor no strong feelings about UT-Austin, which is where I went after 'gheny. I've never teared up during the "Eyes of Texas."*

But during the Allegheny alma mater, I wept, as I do every single time. The day I fail to do so is the day that I'm finally dead inside.

For those of you who didn't have that kind of college experience, I offer just one picture and story, which should be amusing to all, with the possible exception of my father, for reasons that shall become clear. 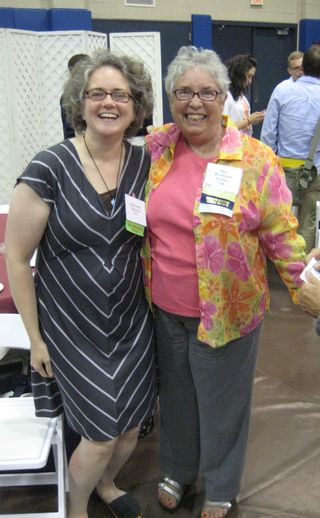 The woman on the right is Sue. Earlier, during a booksigning**, Sue introduced herself to me by saying, "I was your Dad's lover." Then she left me hanging just long enough to watch me struggle to come up with exactly what one should say in response. Then she said, "We were in Last of the Red Hot Lovers together. I was Lover #1."

It was one of those great, fantastic, amazing moments that you're lucky to have. Thanks so much, Sue, and mazel tov on the new grandbaby. And, Dad, if you're still reading, Sue says hi.

The rest of the pictures may be a little inside baseball. Sorry.

We went to this particular reunion to celebrate the retirement of Scott's choir director Ward "Chief" Jamieson. Three hundred singers showed up to spend 12 hours practicing -- hours that could have been spent drinking, mind -- in order to work with Chief one last time.

This is how you organize 300 singers:

And this is what they look like once they are singing: 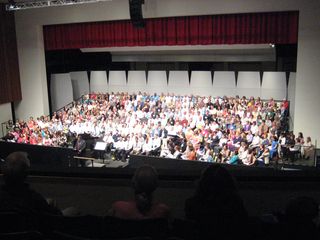 That many voices at once was like leaning into a wall of gorgeous sound.

New friendships were formed, too. Trish, who is actually in Sweater Quest, and her husband Jon-Erik, who may not understand the whole Allegheny thing but is a good sport, brought their kids up for the show. 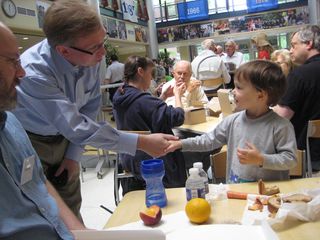 Matt and Griffin introduced themselves. Later, they plan to start an investment bank. 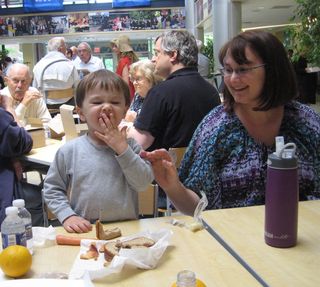 Or maybe not an investment bank. It would interfere with naps.

His younger brother and I got along famously. 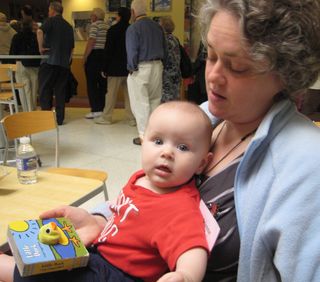 The best thing about other people's babies is that you can love and snuggle and rub off that new baby smell and then hand them back. Although wee Sam is a hard one to hand back, because of the cuteness.

And here's my "hey you kids, get off my lawn" moment.

When the husband and I were getting our theater*** degrees, the theater department and stages were housed in an ancient building that had none of the mod cons students now enjoy. In fact, today's students have a brand new building. 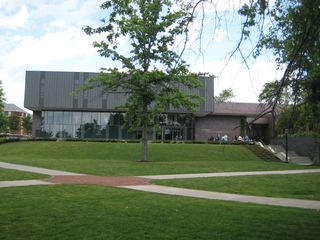 I am jealous beyond words. While the building's innards are everything you could want and the modernist design is proof that boxy can be good, they also have a rooftop garden. Rooftop garden, people! 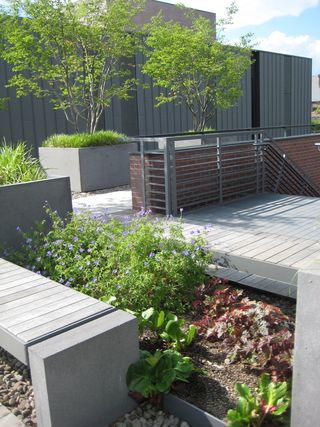 Kids today are soft. Soft! We had no gardens. Only concrete and basements. And a patch panel that looked like this: 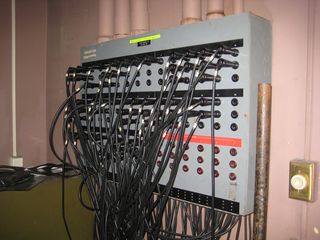 Now you can do it with computers and stuff. Crazy times, man. 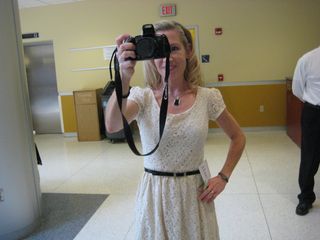 Really, though, it was less about buildings and more about seeing friends and honoring a man who meant so much to so many. Thanks, Allegheny. We'll see you in three years.

* I did once - but blamed that on the margarita salt I'd accidentally rubbed into a paper cut. Tequila helped cut the pain.

Fair Allegheny, yonder on the hill.
We don't know the words, and we never will....

Very inspiring and a good example. Keep it up!I enjoy your story here.

Hey, I saw your dad in that show!

I'm jealous of your visit to the Alma Mater. I don't think I've been back since, uh, the mid- to late-90s. Sad.