qotd, I still love him.

"... former Duran Duran bassist John Taylor told the press he had decided to start thinking of himself as middle-aged. 'It was actually a really good decision to make,' said Taylor, 'because I’d been feeling like a very tired young man.'"

I always have a sock on the needles. This is doubly true in the summer, when the idea of a lapful of wool is less than appealing.* The most recent pair is done, just in time for Fall to really start to get serious. 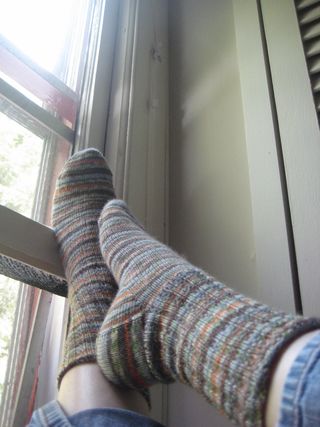 The picture was snapped in my office, with me laying on the floor and trying to get my feet in something resembling natural light before my helpful assistant decided to lick me. 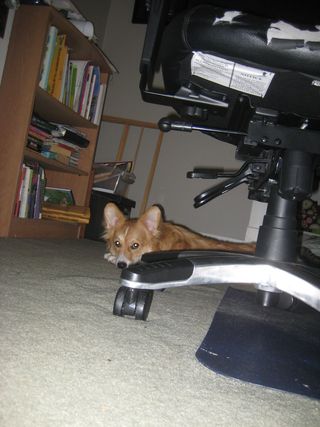 I took three shots before there was a cold, wet nose on my neck.

Oh - and also on the memory card: 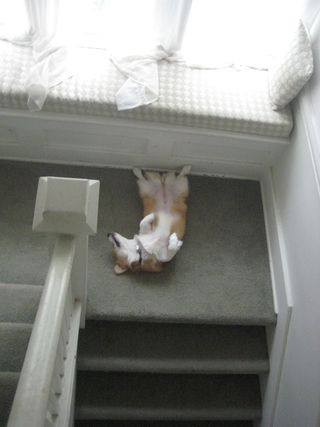 * My next band will be called "Lap Full of Wool."

up with figs, the sassy trot 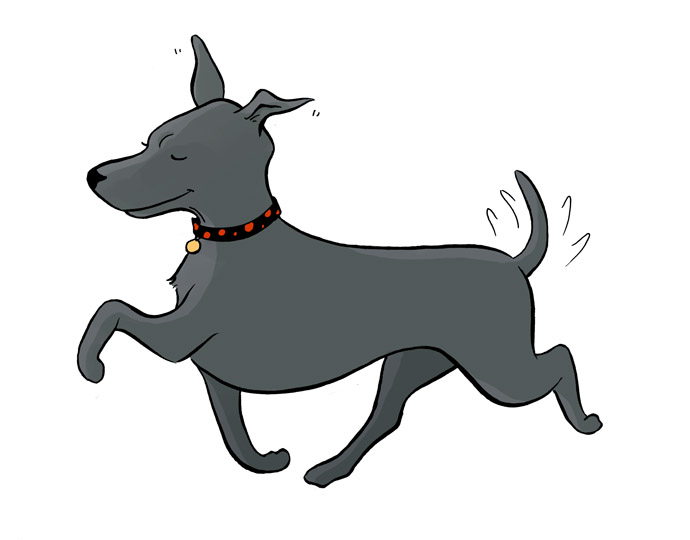 The trick, Daisy discovered, is knowing when to deploy the sassy trot.

All manner of slights can be forgiven, if you know when to do that cute little bounce with your rear end. A gentle prick of the ears completes the look.

The whole roasted chicken filched from the counter? The eaten-then-regurgitated slipper? The gnawed-up baseboards? All a distant memory with a well-timed sassy trot. “Such a delightful girl,” they say. “How could we stay mad?”

Daisy noticed that the Mrs had her own sassy trot, too, but whether it developed before or after Daisy moved in is beyond what the dog could ponder.

* Now I need to figure out how to work the Hulu.

* Is that a Jennifer Egan in your hedgerow?

* Turns out I've always wondered what happened to these people.

* In case you misplaced yours.

* Could someone local start an apple CSA like this one please? I'll be your friend.

* An interview with Michael Perry. His parenting advice could not be more true.

Today turned into one of those running-about-with-one's-hair-metaphorically-on-fire sorts of days. Rather than give you actual content, here are some cute animals: 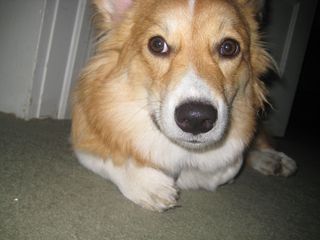 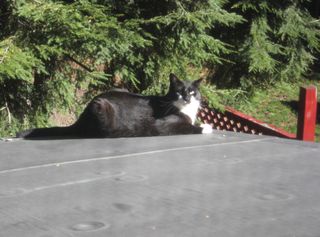 Barney has been keeping an eye on the neighbors. The pots of boiling oil are just outside of the frame. 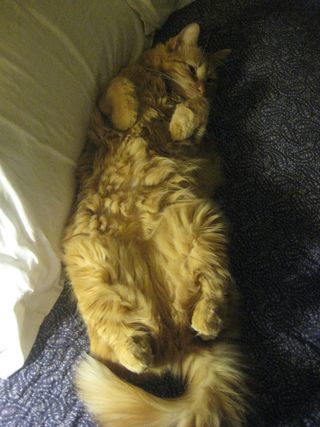 “I thought such awful thoughts that I cannot even say them out loud because they would make Jesus want to drink gin straight out of the cat dish.”

The short version: I went down to NYC last weekend to see (Obie-winning and Pulitzer-nominated ) Lisa D'Amour's Detroit. David Schwimmer and Amy Ryan are in it. It is good -- and so are the reviews (NYT and New York Observer).

The long version: I knew Lisa back in Austin, lo these many years ago when I was just discovering that I might be a writer and she was doing dance/performance installation art. Time passed. I moved to Knoxville and was having a conversation with a good friend there. We discovered that she knew someone I went to college with and in a completely different context. Then we discovered that she went to college with Lisa, who I knew in a completely different context. The world is very small.

Fast forward to last weekend, when the Knoxville friend, who I will call Shelley because her name is Shelley, came up to NYC for a college reunion of sorts, which was organized by a another Knoxville friend. A half-dozen almni of Milsaps College came from scattered points -- like Tupelo and, um, New Jersey -- to see Detroit. I invited myself along because I wanted to see both the show and the folks I knew in Knoxville and don't get to see often enough.

Life is funny, you know? And sometimes Ross from Friends shows up, too.

up with figs, feets don't fail me now 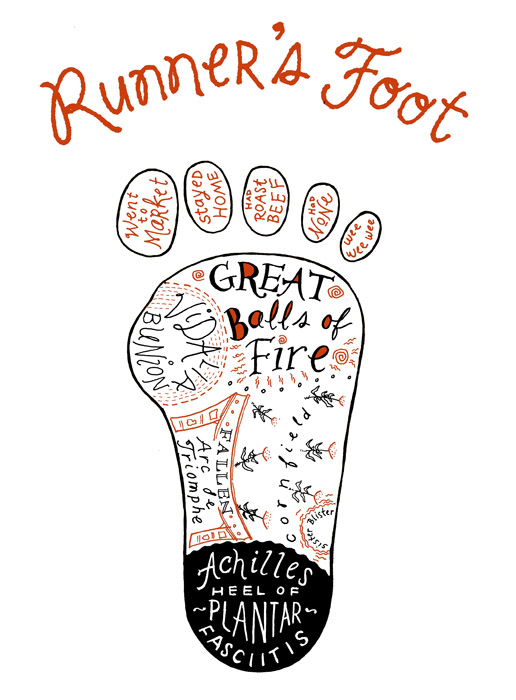 Most Sunday mornings, I take a long run.

Long runs are good for you. They make the short runs faster. But, oh, I do not like the long runs because they are just so dang long.

Sometimes, I get lucky. I lose my chattering brain in the run and focus on my breathing and my footfalls and not much else.

Most of the time, my chattering brain does nothing but whine about my breathing and my feet and my legs and my sweat and my tiredness and my weakness. And on. I do what the yogis suggest, which is acknowledge the thoughts but pay them no attention.

Kidding. That almost never works. I mostly tell my chattering mind to quit being such a pussy. That’s how I roll.

Last week’s run was one of those, where every step landed on a new complaint, causing them to squeak. I was in a foul mood by toward the end, disgusted by my own brain.

And, then, like a cliched benediction, the morning glories on the Baptist Church’s railings were in full glorious bloom; their bright blue faces were soaking up the early fall sun.

Bastards, I thought. Way to ruin my self-pity.

* Maybe I'm in a running lull -- I'm still running but feel sorta stuck -- because I'm not training for anything cool. This looks cool. Who's with me?

* I'm totally a skeptic but I do find acupuncture to be a near miracle. And there's evidence to support it.

* I heard this song again recently and was reminded how I shouldn't hear it unless I'm willing to be gutted by it each and every dang time.

* How to sort lentils. This may be why everything I've ever tried to make with lentils turned out terrible.

* This event at Oblong Books should be fantastic. I'm planning to go. Who wants to carpool?

* Help out a word worker, if you are so inclined. Knitting bracelets and jewelry.

* Ben Folds Five meets the Fraggles. It gets silly.

shameless self-promotion, 370 in a series

Just got back from a fine weekend in the big, bad* city where I had the opportunity to say "Thank You, Mood," to sleep in the smallest hotel room I've ever experienced** and to see a play with David Schwimmer in it***.

While I sort out all of the stuff that accumulated on my desk over the last 48 hours, here's my latest column in the local almost-daily.

* NYC isn't really all that big (in area) nor is it bad. I love it and would love to be wealthy enough to have an apartment there so that I could swan down when the mood struck. That is not my life, however. Still, the life I have is a pretty good one.

** There was enough room for bunk beds (I took the top one), a wee bathroom and wee-er desk. Think Amtrack sleeper car - but not rockin gback and forth and with toiletries. (It's this place. Lovely and all we needed, mind.)