up with figs, room with a view 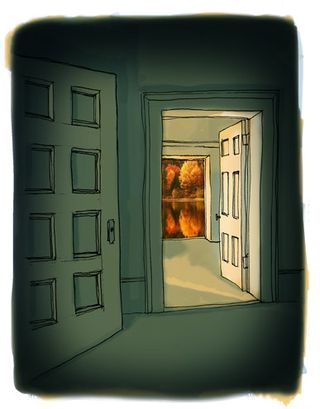 I had that dream again. The one where we have moved because you made the executive decision to quit your job and pack us up to someplace new. I used to wake up incandescent with rage at my subconscious version of you for the disorientation, for the disconnection and for the sheer fact that the houses you picked were always falling apart on some fundamental level. But last night, you moved us near my hometown. We were deep in the mountains and the view from the backyard was glorious, all soft yellows and oranges and reds. I took pictures with my cell phone so that I could show all of my friends back in our old city how lovely the new place was.

(Quick update: we are no more damp and windblown than we would be from a regular old storm. Spare a thought, however, for lower Manhattan.)

* You can't handle the truth.

* Two from Slate: the tyranny of irons and I ought to be more surprised by this than I am.

* If a woman with Parkinson's can run a marathon...

* Makes a note for next Halloween.

Today's plans have abruptly changed. The powers that be seem to think that Sandy will start throwing her weight around here mid-afternoonish and classes at both the kids' school and mine are done at 1 p.m. Honestly? This thrills me, because I could really use an afternoon off. And by "off," I mean "nothing more challenging on the agenda than getting the Diva to clean her dang room." Which isn't too bad, really, and leaves me plenty of time to knit.

More updates if needed. We live on fairly high ground and are well stocked with liquor and cookies. Worry not on our account. Worry for the coastal folk, who are in for a rocky night.

"If you see just one repellent femm-owned-and-operated comedy about unpleasant women and a stubborn case of vaginal yeast infection, you might as well make it That's What She Said, since I hope there'll never be another like it."

shameless self-promotion, 372 in a series

Not only did I get to see Detroit, I also got to interview Lisa D'Amour for my old paper of employ.

And for your random enjoyment, McGregor would like to know why the hell I disturbed his sun nap for a picture: 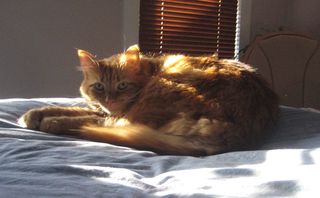 Also: Trout, our oldest kitty who has had some health problems in the past, is still hanging in there: 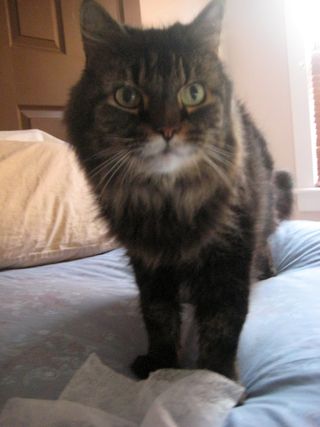 Barney is not in this series of pictures because he was outside terrorizing local fauna and the occaisional undergrad. 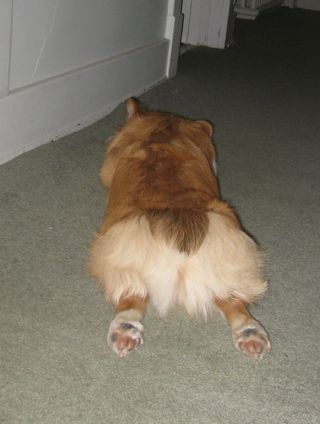 up with figs, unfinished stories 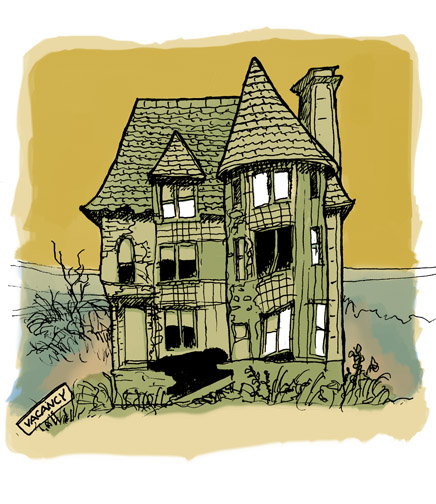 This is the house where stories go to die.

Every writer has one. In mine is:

One half-finished actually-kinda-good science fiction novel that I will get back to Any Minute Now.

A book proposal all about why I run and why many other people do too that no one thinks will sell.

A book proposal about spinning (yarn, not bikes) that didn’t sell (but that may live on as a zombie).

A book proposal about genetics and families that would give me an excuse to go to Italy.

Two short stories that are stories in name only, given that they both lack plots and fleshy characters but are far too full of ideas.

An even dozen one sentence story ideas. (Sample: Cooking with the enemy in the spite house, Lysistrata with robots.)

Will any make it out alive? Or will they languish and fade and live on as cautionary tales told to small children to get them to mind their elders?

* This has been making the rounds. It's still awesome.

* The thought behind what be my favorite building in New York City.

* Is it strange that I briefly considered installing this in my house somewhere?

* If you substitute wild turkeys and hungover undergrads for sheep, my commute looks a lot like this.

As I do most years during the third weekend in October, I went to the great and mighty Rhinebeck. And as I do most years, I came down with camnesia and took only a few pictures, like this one at a team spinning competition. Yes, there is such a thing. 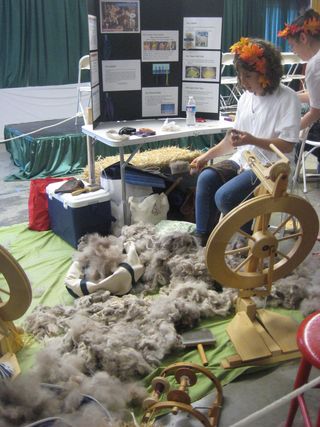 Cosplay seems to have become popular at fiber fests lately. Here's the head Verdant Gryphon herself, who I pestered to see if she had a booth. (She didn't.) 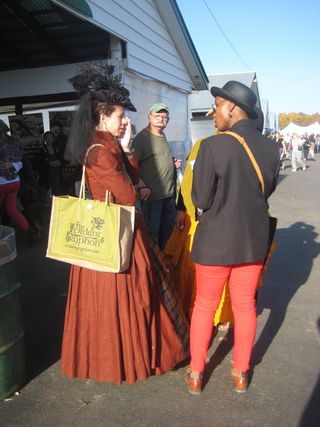 I did, however, get a picture of Anj with her fascinator, which I might just have to make for myself. 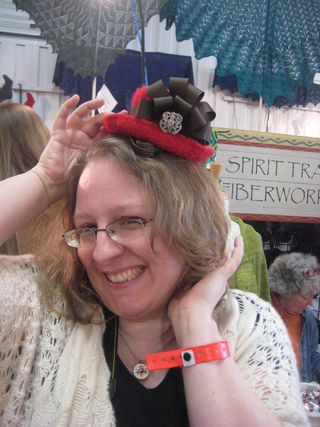 And as happens most years, college friends drove from parts far and wide (Pittsburgh this year) to have a mini-reunion. This year, it was Trish. And her fetching hat. 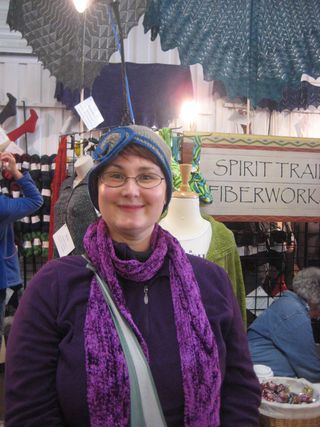 I came home with one $5 ball of yarn that was exactly what I needed to knit a chemo cap. I also came home with Pumpkin pie fudge and jerky, for the husband. I also had the best falafel sandwich I've ever had.* Mostly, tho, the weekend was about communing with friends -- although I missed Steven, dang it -- and the festival itself.

* with apologies to Knoxville's falafel hut, which used to hold this title.

"Women enjoy a good pander as much as anybody else, and it was great to have the candidates tackle issues like equal pay and reproductive rights. Although it was a little weird that the two men vied for female favor by interrupting and barking at one another like a Worst Boyfriend."

On the small pleasures of living in a college town

I'm not a lover of poetry. I have nothing against it, mind, but often find it too precious, too willfully obtuse to enjoy. It's like Mad Men; I feel as if I should like it more than I do. But Billy Collins I love.

Hearing him read his work is a different experience than reading it yourself. Not necessarily better, of course, but it's own enveloping thing. His voice is measured and wry. He does a little dance with his reading glasses and hands. Like the best lecturers, Collins seems completely at ease yet aware that he is performing.**

What struck me most*** about this reading was the little thrill that ran through the audience when he read a poem we already knew, like "Another Reason Why I Don't Keep a Gun in the House" or "Litany." It was like we were at a Lynryd Skynyrd show and had just heard the opening notes of "Freebird." I had to fight a not subtle urge to hold a lighter in the air after he read his last piece.

Thanks to both Collins and Hartwick for the event. It was a lovely night.

* When asked what it was like to be the poet laureate, Collins said something to the effect of:  "it does wonders for one's self esteem."

** I do my best to cultivate this in my own lectures. Some days, for brief moments, I succeed.

*** I was struck to a lesser degree by Collins comparison of writing to an eye chart. You want to start at the top with the most clear image like the big "E," then work your way down into the lines that are less easy to focus on.