up with figs (rerun), god help us everyone

(Lisa and I are in the depths of December madness. Hence, a rerun or two to tide you over until the new year, which is when we will return with All New Figs!) 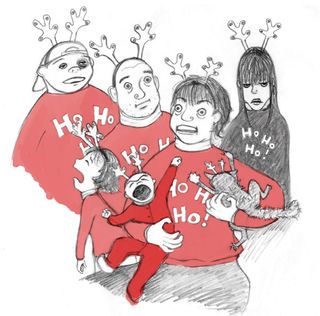 No one ever asked what she wanted for Christmas. She would have been happy to tell them.

It isn’t a new car. Or a Kitchen Aid stand mixer. Or a mink. Or a diamond necklace from Jared.

It isn’t peace on Earth, if only because that is impossible as long as there are animals and plants living on it. It isn’t a perfect day with her family, because that, too, is impossible. She’s happy with what her family usually gives her, which is themselves as they are, even if, at times, that makes her want to tell them to all just shut up already. Those moments pass quickly.

She doesn’t want her two front teeth. Or a pony. Or a puppy. Or, really, anything else that requires care. Even sourdough starter is too needy right now.

What she’d really like, deep in her heart of heart where even Santa fears to tread, is for it to be easier. She’d also like to know how this story ends, just to know if this is a light comedy or a cautionary tale.

Barring the impossible, however, she’d like something that no one ever seems to think to give her: a tin of Peppermint Bark from Crate and Barrel and a chocolate babka from Dean and Deluca. And to not have to share.

* The world's smallest violin is playing just for you.

* For the (board) gamers in your life. (Love Letter looks interesting, imo.)

* Disturbing on a number of levels.

* Two Neils and a Nari discuss poetry and venereal disease.

* This podcast touches on some of the reasons why teaching can feel worthwhile.

* I need to staple this on my forehead.

* On Thanksgiving and choice.

* I would like this to get in my belly.

* The Elf drives mothers crazy. (It's telling that the Elf was partly invented by a QVC executive.)

From the local almost daily: On letting go.

Unrelated, really, but yesterday I drove out to Rhinebeck, not for sheep and wool but to meet Gwenda Bond and Libba Bray who were doing a reading at Oblong Books. I managed to get there in enough time to take a shopping excursion with Bond and Literaricat, which took us to a charming and strange variety store. There was amazing yarn in the back and this in the front: 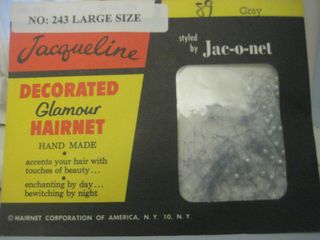 This glamour hairnet is "enchanting by day ... bewitching by night." And for 89 cents, who can resist? 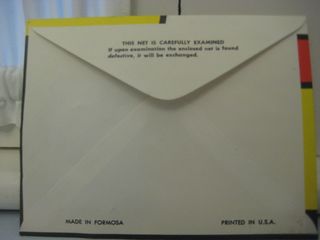 Plus, it was made in Formosa and carefully examined. How can you lose? 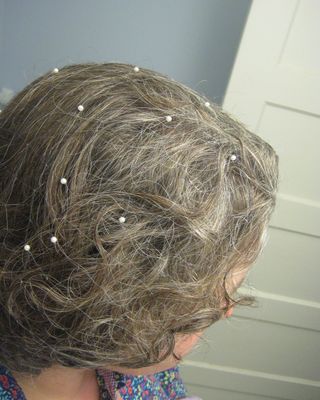 See? It blends right in. And, yes, I am getting to be that grey. It gives me gravitas. 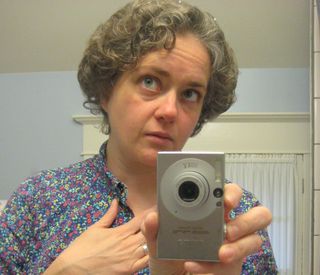 So am I bewitching? Enchanting?

qotd, her best book, I think

“Like Lincoln, I would like to believe the ballot is stronger than the bullet. Then again, he said that before he got shot.”

both awesome and frustrating

Here is my Christmas toy: 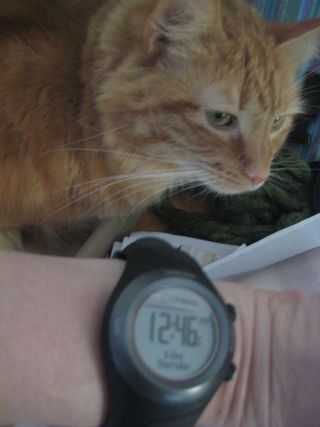 The watch, not the cat. He's not really a toy.

It's a Garmin 410, which comes courtesy of an Amazon deal and a Santa Dad. The timing* was perfect.

I've been wanting a running watch, one that will keep track of mileage and heart rate and stuff.** I've also sort of*** committed to running a half-marathon (this one) in May and the new gadget can help me toward that goal. Or so I've convinced myself.

But, oh, as much as I love technology, I hate learning to use it. I nearly burst into tears last night when it took me a good 15 minutes just to figure out how to charge the silly thing. In my own defense, there were at least ten different manuals and bits of important looking black plastic to sort through before I found the right ones. Still, I should not be so easily undone by a dang watch.

I managed to take it on an inaugural walk earlier, just to see what buttons do what. I've discovered two things: one, this watch was not made for my skinny little girly writer wrists and two, my perennial problem with not having touch screens recognize my touch extends to Garmins as well as iPods. Still, I shall persevere.

Next I'll try to put on the heart rate monitor without electrocuting myself. Wish me luck.

Any tips from the runners out there?

* pun not intended but I've decided to roll with it.

** highly technical term that only other runners will understand.

*** my brain has committed. We shall see how my body feels.

up with figs, a rerun

(Lisa and I are in the depths of December madness. Hence, a re-run or two to tide you over until the new year, which is when we will return with All New Figs!) 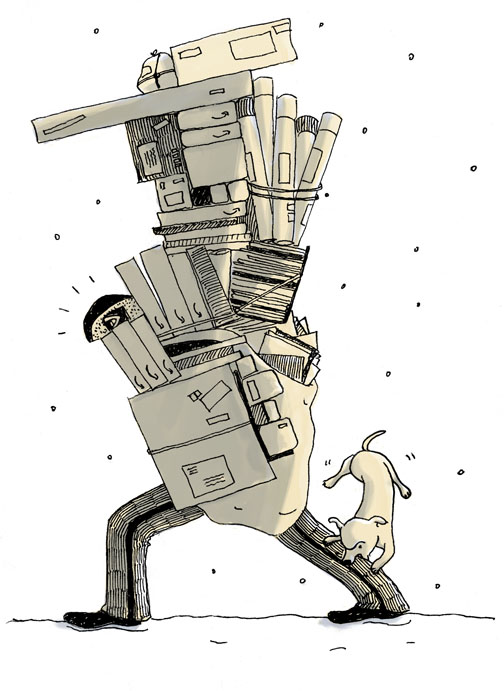 This is the time of year when I feel the most sorry for mailmen.*

Every single time I step out to the mailbox, it contains at least five pounds of catalogues.

That’s a conservative estimate, mind. On the days when I also get my issues ofMartha Stewart Living and Real Simple (don’t judge), the estimate crawls up to eight or nine pounds.

Then there are the boxes. And Tyvek mailers. And brown-paper-and-bubble-wrap envelopes.

It’s a lot of stuff, is what I’m saying.

And some of it is probably weird stuff, too. Not that I personally get weird stuff but I know for a fact that you can mail a coconut or a bowling ball or live chickens or crickets.

If I’m getting all of this mail, I can only imagine what our mailman (see below) has to carry up and down our street, which has at least ten houses on it. In the cold. And, frequently, in the dead of night.

I want to leave a plate of cookies out for him on Christmas Eve. Along with a Thermos full of hot toddies. Because, seriously, dude deserves it.

* Or “letter carriers” or “mailpersonsofeithergenderwhichisnotintendedtoexcludethetransgenderedtosaynothingoftheintersexed.”

* This is the kind of publicity that makes someone!

* Scott and I were talking about this episode of the sadly departed Better Off Ted the other day. I wonder how the series would have fared post-Community.

* This might be the best explanation on the hows and whys of weightlifting that I've ever seen. Also, very sensible running advice. Also, this is awesome.

* Turkey Day by the numbers and a bonus Franklin cartoon.

* The Sainthood of James Garfield. (I nearly hurt myself with the bit about the water buffalo.)

* Three from slate: This will be on my next syllabus and what makes a man, and is Prague the most emo city?

go on without me

It's the last week of classes here, which means that I'm incapable of holding a thought in my head for more than ... wait. What was I talking about?

Soon, my brain will be as back as it ever is and I'll talk about something more meaningful. Or yarn. Or both.

But until then, a song for you*, which a small explanation and a question. "Polaroids" is one of those songs that seems to follow my life; not to get all rhapsodic but I seem to feel a new verse every few years since I first heard it. Like, in my early 20s, it was all about the therapy and eiderdown, then in my late 20s, the nothing surprises me verse. And now I get the last image, the one with the Polaroids. Which makes me a little sad because I'm out of song. Still - I'll cope.

And the question: what songs do the same for you?

* And I can't believe that I found a clip of Colvin singing the song with accompanyment from Emmylou Harris, Buddy Guy and *squee* Patty Griffin. We are not worthy.

donate a little; donate a lot.

World AIDS Day is a hard holiday to shop for. Fortunately, "Bitches Get Stitches" Steven* has done all your shopping for you. Make a donation and maybe win some stuff.

1. on december 1st, click this link to visit the lansing area aids network website and make a donation via paypal. the suggested minimum donation is $40, the cost of one rapid hiv test. however, i know $40 is a lot money for a lot of people (myself included). since i don't want to discourage anyone from making a donation they can afford, all donations will be accepted, even if it's only $1.

2. shoot me an email at bgsworldaidsdayproject@gmail.com with your contact information and the amount you donated. the details of your personal information will be kept confidential. this is so i can keep track of the total as it grows, and so i can make sure you get your prize.

3. winners will be chosen at random. it could be you!

the bold print: *entries will only be accepted on world aids day itself (dec 1st)! this means 12:00am - 11:59pm is your 24 hour window to make a donation and send me an email to be entered to win some loot. i'm in the eastern standard time zone here people, so my giveaway is too!

* I'm still bummed that I missed him at Rhinebeck. Curse you puny human brain!