Home Archives Profile Subscribe
up with figs (rerun), god help us everyone
qotd, this is hard

the moments are never dull

We have three cats. It is a lot of cat, frankly, but we're committed now and will simply have to wait the situation out.

To review, for those who aren't concerned about the minutiae of our cats' lives:

McGregor is the youngest, an orange tabby of considerable size. He's the one who will probably make friends with the dog, once the dog is less about playing and more about sleeping.

Barney is an ex-barn cat who deigns to live with us on a conditional basis but would really rather be outside killing things. We honor his wishes and spend most of our time opening and closing various doors and windows for him.

The eldest is Trout, who is both feeble of mind and body. He does his best, bless his heart, but gets very confused when we move his food dish three feet to the left.

When we got Lucy, both McGregor and Barney got over the trauma fairly quickly. Adjustments were made. Their lives went on.

Trout, however, took to hiding under the bed and using our bedroom as his personal litterbox, which was, at best, gross. Various remedies were tried but I resorted to covering his favorite spots with aluminum foil, which has the added bonus of keeping the other two cats from eating a plant I'd foolishly put in the room, too. Because I'm not terribly smart, that's why.

It has worked well, mostly. But I'd forgotten that most living things, with the exception of Trout, acclimate. 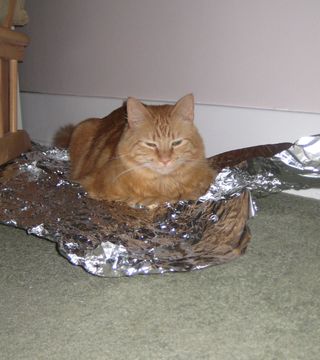 What's not in the picture are all of the leaves of my spider plant, which had been cruelly ripped from the prime of its life.

As the current own--, er, servant of two cats and former foster mother to dozens of others, I can sympathize. Have you discovered Nature's Miracle, the enzymatic cleaner for those annoying stains?

I had the biggest laugh from this. A much needed, full on, belly laugh. I thank you, from the bottom of my belly. Hug McGregor for me.

Oh, the foil, the foil! Since we got our dog, Jack, two of our three cats have been peeing on couch cushions, on chairs, in the tub (oddly convenient but still nasty). Every time we leave the house we put large pieces of foil on the chair and couch to keep the cats off. Our house looks like we're expecting aliens. And the non-peeing-on-the-furniture cat has curled up on top of the foil pieces, just like McGregor. Maybe it's an orange cat thing?

You have my sympathies (first, because Ned, well, has the 'other' issue and I am (mostly) thankful for that. And second, because Nickie loves to play with tinfoil - it's just a noisy toy to her.)

From experience - the furry ones may not get zapped by electric fences.